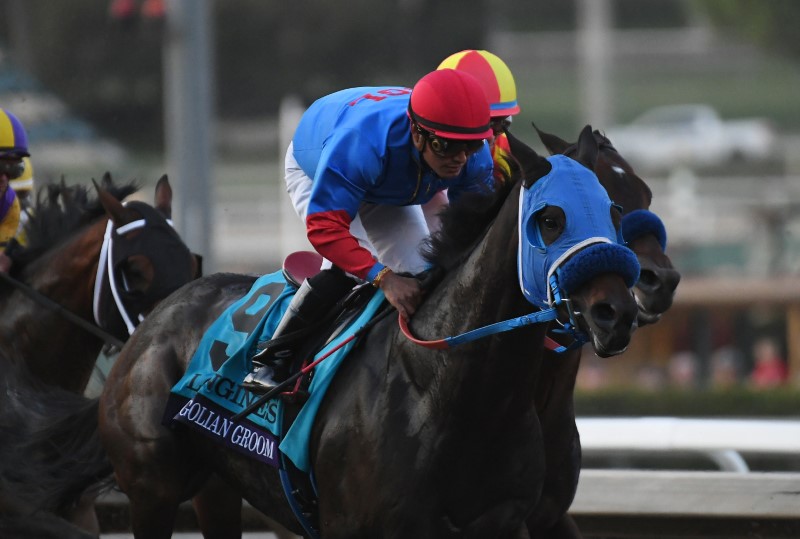 Four-year-old Mongolian Groom injured his left hind leg going into the final turn of the nationally televised $6 million race, was taken away from the track in an ambulance and later euthanised.

Thirty-seven horses, including three in the last nine days, have died at the famed race track since late December, shining a spotlight on a sport that lacks national regulation pertaining to the misuse of drugs, a leading culprit in horse fatalities.

In April, Los Angeles County District Attorney Jackie Lacey announced an investigation into why at that time 23 horses had died at Santa Anita over a three month period.


The results of the investigation have yet to be released, leading to frustration on the part of activists, who protested outside her office demanding answers on Thursday.

The Breeders’ Cup, the sports richest event with some $30 million up for grabs over its two days, changes venues every year and its board had considered moving it from Santa Anita in light of the fatalities.

But in June it voted to keep it at Santa Anita as planned after track owners the Stronach Group implemented new rules governing the use of race day medications and hired a record number of veterinarians to examine the horses prior to their starts.

“The decision to hold the Breeders’ Cup at Santa Anita before the results of investigations into the spate of recent deaths was ill advised,” Kitty Block, CEO of the Humane Society of the United States, said in a statement.

“We believe that a suspension of racing at this track is warranted until the investigations of those deaths, and now the death of Mongolian Groom, are completed and released.”

“If the racing industry and state officials truly want to save horses’ lives, they will suspend trainers and veterinarians of horses who die pending full investigations, install safer synthetic surfaces and CT scan equipment at all tracks, and ban all drugs in the two weeks before a race,” said PETA senior vice president Kathy Guillermo.


“All racing nationwide must be suspended until these measures are put in place,” she added.

“Any reluctance to do so will lead to more deaths and the self-destruction of horse racing.”

A video of the race released by PETA shows jockey Abel Cedillo whipping Mongolian Groom as he came around the final turn on the fast dirt surface before stopping and raising his left hind leg off the ground.

“So even if he was in pain and wanted to slow down, he could not have done so,” Guillermo said.

“Striking horses during racing must be banned now.”

The California Horse Racing Board has proposed a measure that would greatly limit the use of the whip. The measure is currently open for public comment.

Backers of the Horse Racing Integrity Act, federal legislation that would curtail the use of drugs and establish national oversight, said they hoped Saturday’s tragedy would prompt Congress to act.

“American horse racing is at its greatest crossroads in history, and the death of Mongolian Groom underscores the need for Congress to pass the Horseracing Integrity Act,” said Marty Irby of Animal Wellness Action.


The Breeders’ Cup and the Stronach Group support the bill but is opposed by Churchill Downs, home to the Kentucky Derby, a state represented by Senate Majority Leader Mitch McConnell.

McConnell has yet to announce his position on it.

California Senator Dianne Feinstein had said the Breeders’ Cup would be “critical test” for the future of horse racing in the state prior to the event.

On Saturday the Breeders’ Cup said measures had been put in place to ensure its athletes were racing under the “safest and most transparent conditions possible.”

“The death of Mongolian Groom is a loss to the entire horse racing community,” the Breeders’ Cup said in a statement.

“Our equine and human athletes’ safety is the Breeders’ Cup’s top priority. We have worked closely with Santa Anita leading up to the World Championships to promote enhanced equine safety.”

The race track concludes its autumn meet on Sunday.