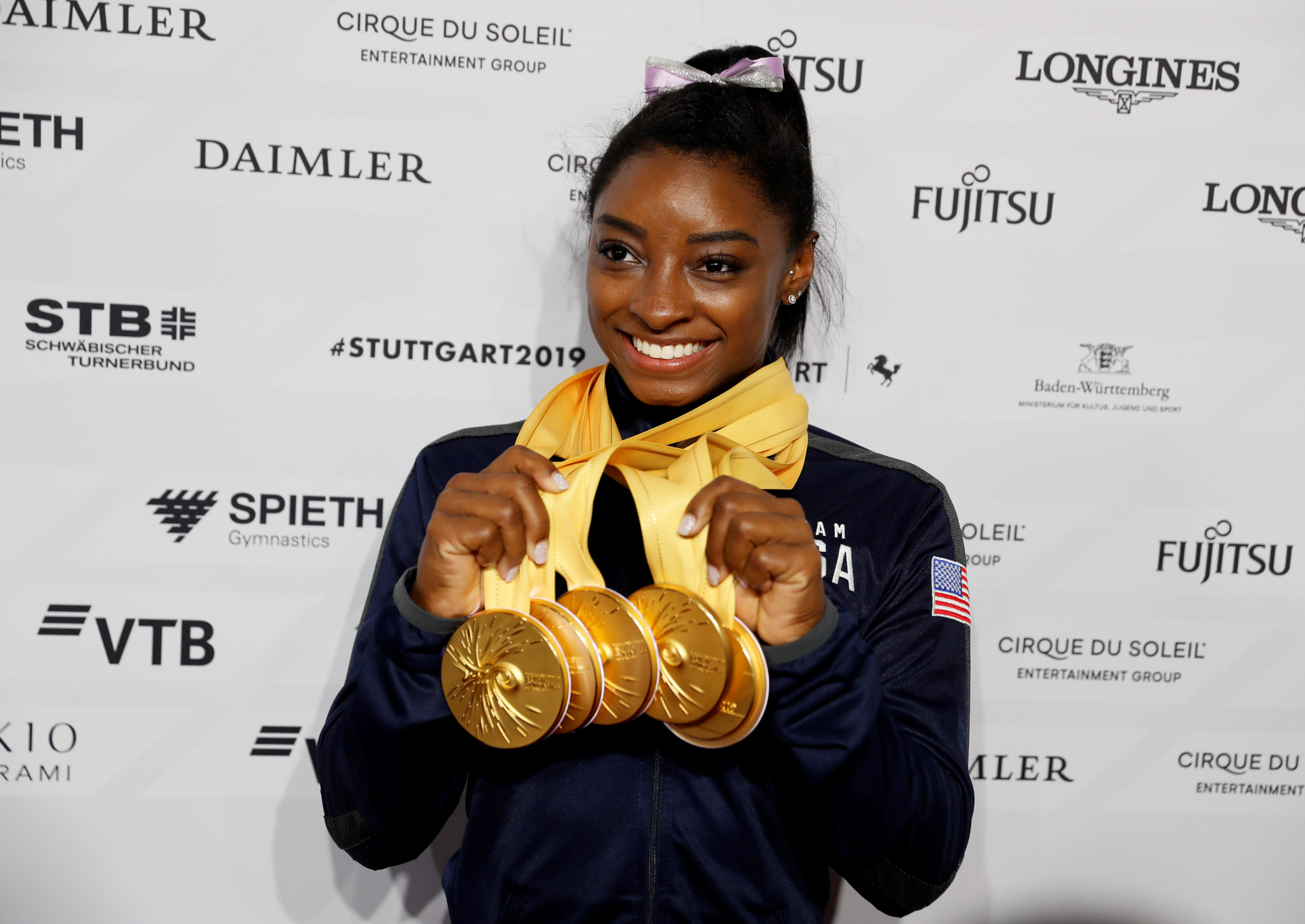 American Simone Biles became the most decorated gymnast in world championship history on Sunday when she won the beam and floor finals to take her career tally to 25 medals.

Soon after securing a convincing victory on the beam in Stuttgart to overtake Belarusian Vitaly Scherbo’s record tally of 23 world medals, the 22-year-old Biles successfully defended her floor title to win medal number 25.

The four-time Olympic champion is now the owner of 19 gold medals across four championships against 12 for Scherbo, who competed in five world events between 1991 and 1996.

Making her final appearance of the week in front of a raucous crowd, Biles wasted no time as she landed a superb triple-twisting double back flip — known as the Biles II – on her first pass.

Biles’s double layout with a half turn — another skill named after her — put her out of bounds for a 0.1 penalty but she did enough to post a winning score of 15.133.

“Honestly, I just couldn’t move. I was so tired,” Biles said of her final pose on the stage.

“This is really the best worlds performance I have ever put out.”

The Americans took a one-two finish as Sunisa Lee finished with 14.133 for the silver medal, while Russian Angelina Melnikova came third.

Earlier, Biles delivered a polished routine on the beam before a full twisting double tuck dismount for an impressive 15.066.

Although Biles had twice before won the world beam title, in 2014 and 2015, it has not always been plain sailing for her on the apparatus.

Her slip on the landing of a front tucked somersault at the 2016 Rio Olympics meant she had to settle for a bronze in the event. Last year again, she dropped off the beam during the women’s all-around final at the world championships.


But she has regained her swagger this week, under the watchful eyes of balance beam coach Cecile Landi, and posted top scores in all four attempts — qualifying, the team and all-around finals and Sunday’s apparatus final.

“It meant a lot because Cecile has really been working on bringing my confidence back up to where it used to be on the beam,” Biles said.

“To go out there and nail the routine, just like I do in practice, it felt really good and I knew she was really proud.”

As another title-winning score was announced in the arena, Biles punched the air in jubilation before joining celebrations with the U.S. team.

Biles finished her campaign in Stuttgart with five gold medals from six events to mark ideal preparations for next year’s Tokyo Olympics.

Her barnstorming run included a record fifth all-around gold, an individual vault title, as well as helping the U.S. to a fifth straight world team title.