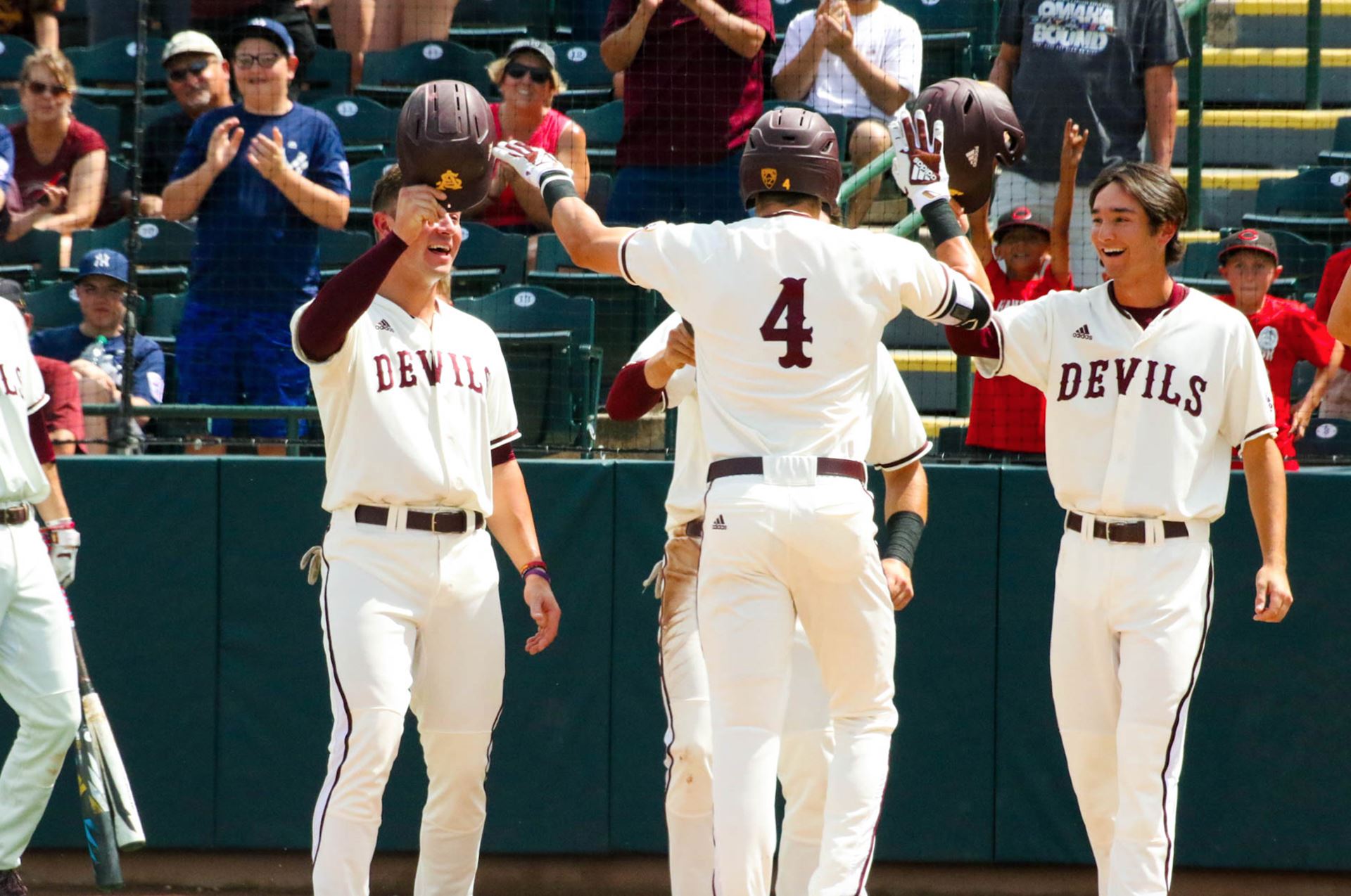 A three-run rally in the bottom of the eighth, capped by Carter Aldrete’s pinch-hit single, propelled No. 22 Arizona State past top-ranked UCLA 8-7 on Sunday.

Hunter Bishop, Spencer Torkelson and Gage Workman each homered for Arizona State, which improved to 33-12 overall and 14-10 in the Pac-12.

The Bruins (37-8) won the first two games in the weekend series, defeating the Wildcats 3-2 in a pitcher’s duel on Friday night and routing their hosts 18-3 on Saturday. With Sunday’s loss, UCLA dropped to 16-5 in the Pac-12, a game behind both Stanford and defending national champion Oregon State, which are tied at 17-4 in conference play.

UCLA returns home for a midweek tilt against Long Beach State at Jackie Robinson Stadium on Tuesday before traveling to Pullman, Washington, for a three-game conference series against last-place Washington State this weekend.

Second-ranked Stanford (34-8) and No. 3 Oregon State (31-14-1) also lost on Sunday, with the Cardinal dropping a 4-2 contest to USC in Los Angeles and the Beavers falling 8-7 at home to Oklahoma State in a nonconference game. Oregon State dropped all three weekend games against the visiting Cowboys.

Right-hander Patrick Raby (8-1) retired the first dozen batters he faced as fourth-ranked Vanderbilt (38-9) completed a three-game sweep of South Carolina (24-23) with a 6-2 victory over the Gamecocks at Founders Park in Columbia on Sunday.

In picking up his eighth win of the season, Raby became Vandy’s all-time career wins leader.

Relying on three long balls, Kentucky (22-24) stunned fifth-ranked Arkansas (37-11) 4-3 in the second game of a doubleheader yesterday in Lexington. Elliott Curtis, Coltyn Kessler and leftfielder Ryan Shinn each homered for Kentucky. Shinn’s home run, a solo shot, was his thirteenth of the season.

Arkansas had little trouble in the first game, downing the Wildcats 9-1. The loss in the nightcap, however, snapped the Razorbacks’ six-game winning streak.

Seventh-ranked Louisville (39-9) won its ninth straight game while completing a three-game sweep of Notre Dame (19-26) with an 8-2 victory over the Fighting Irish in South Bend on Sunday. Sophomore right-hander Glenn Albanese (1-0) picked up the victory in his first collegiate start.

It was the fourth conference sweep for the Cardinals this season, who have now defeated Notre Dame nineteen consecutive times.

Georgia Tech (33-14) notched its first three-game sweep of the season as the eighth-ranked Yellow Jackets routed Western Carolina 14-1 before a crowd of 1,088 at Russ Chandler Stadium in Atlanta.

Winning both games of a doubleheader, ninth-ranked Georgia (37-12) completed a three-game sweep of Florida (28-21) with a pair of brilliant pitching performances on Sunday. Holding the visitors to three hits in the first game and only two in the nightcap, the Bulldogs trounced the Gators 9-1 in the opener and came out on top 4-1 in the second contest before a twin bill crowd of 2,845 at Foley Field in Athens.

It was the first time Georgia had swept Florida since 2006.

With the three-game sweep, Georgia improved to 16-8 in the SEC while Florida, which has lost seven of its last nine outings, dropped to 9-15 in the conference.

Spencer Brickhouse and Alec Burleson each banged out three hits and starter Tyler Smith (6-0) fanned a career-high eight batters as tenth-ranked East Carolina (36-11) completed a three-game sweep of Cincinnati (22-25) with a 6-2 victory at Marge Schott Stadium in Cincinnati on Sunday.

East Carolina, which has won eleven of twelve since dropping a tough three-game series at UCLA last month, defeated the Bearcats 9-4 on Friday and 6-3 on Saturday.

With the sweep, the Pirates improved to a league-leading 16-2 in the American Athletic Conference — 5 ½ games ahead of second-place Tulane — while Cincinnati dropped to third place at 11-10 in the AAC.

East Carolina travels to Chapel Hill on Wednesday to take on North Carolina before heading to Kansas for a three-game AAC series against Wichita State next weekend.

In other games yesterday, Dartmouth skipper Bob Whalen picked up his 600th career win when the Big Green (15-26) defeated Cornell 6-1 in Hanover, New Hampshire, in the season finale for both clubs. Whalen, a former pitching coach at the University of Maine who later became Dartmouth’s all-time winningest head coach in 2010, is in his thirtieth season at the helm.