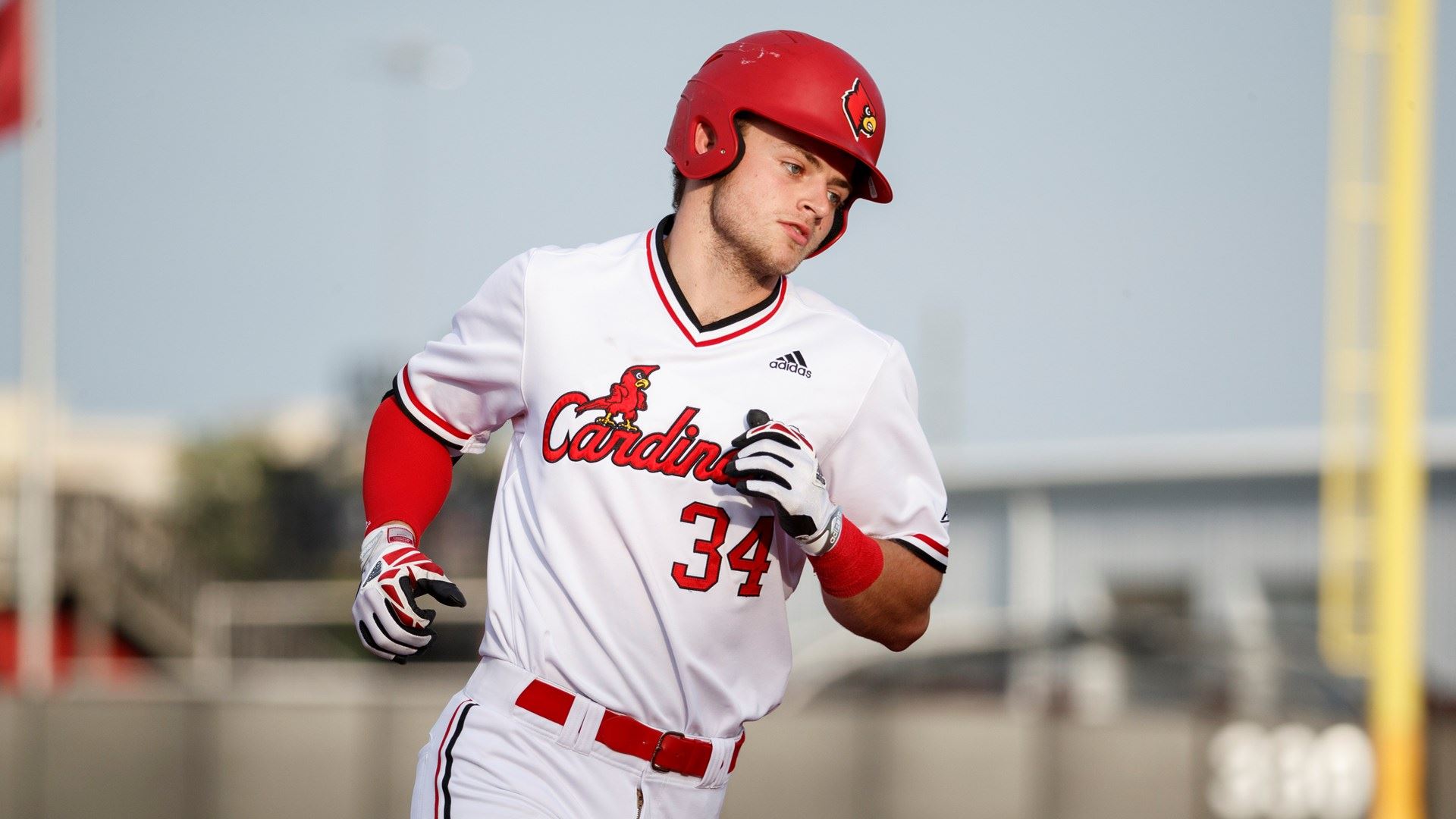 College baseball heated up on Thursday as several higher seeds were eliminated from their tournaments while some lower-seeded teams kept their faint postseason hopes alive.

Following back-to-back losses, Illinois and Indiana — the only nationally-ranked teams in the Big Ten — were both eliminated from that conference tournament on Thursday.

Sophomore Jordan Nwogu’s two-run double with two outs in the bottom of the ninth lifted Michigan (39-17) past the 20th-ranked Illini 5-4 yesterday morning at TD Ameritrade Park in Omaha while fourth-seeded Minnesota (27-26) pounded No. 21 Indiana 9-4 to eliminate the Hoosiers (36-21) from the tournament.

The Ohio State-Maryland game — the third contest of the day — was suspended in the eighth inning with the Buckeyes leading 3-2. That game will be resumed today, followed by a game between Nebraska and Iowa, which was also postponed last night due to inclement weather in Omaha.

The ninth-ranked Louisville Cardinals (43-15) left Durham winless after dropping their second game in as many days with a 7-1 setback to Clemson (34-24).

Louisville, one of the nation’s most explosive offensive units, managed only one run and a single hit against Clemson starter Mat Clark (9-2) in eight innings at Durham Bulls Athletic Park on Thursday.

The listless Cardinals, who were 0-2 in pool play after winning the ACC regular season title, lost to upstart Boston College — the tournament’s Cinderella team thus far — 5-1 on Wednesday.

With the victory, the Wolfpack advances to Saturday’s semifinals, regardless of the outcome of their game with Florida State on Friday.

In the ACC’s only other game on Thursday, No. 17 Miami (39-17) — also playing its first game in the tournament — swept past Virginia 10-3. It was Miami’s fifth straight ACC tournament opening victory.

The Hurricanes will conclude pool play against North Carolina at 3 p.m. this afternoon with the winner advancing to Saturday’s semifinals.

Capitalizing on a wild pitch and an error, the exhausted LSU Tigers (36-23) scored two runs in the bottom of the ninth to defeat Auburn 4-3 early yesterday afternoon and stay alive in the SEC tournament at Hoover Metropolitan Stadium in Hoover, Alabama.

The loss eliminated Auburn (33-25) from the tournament.

Sixteenth-ranked LSU, which suffered a heartbreaking 6-5 loss to third-ranked Mississippi State in a 17-inning marathon on Wednesday night — a tightly-contested game that dragged on for 6 hours and 43 minutes and finally ended shortly after 3 o’clock in the morning — only had four hours of sleep before the start of Thursday’s game against Auburn.

“I told our players this morning at breakfast in a very heartfelt way that I was very proud of them last night despite the result of the game, and if somehow they could find the energy and the enthusiasm to go out there today and find a way to win this game, that it would be one of the more special wins that I’ll ever remember at LSU because nobody would give us a chance,” said head coach Paul Mainieri.

“Who would give you a chance after getting into bed at 4:30 in the morning and having to get up four hours later for a pre-game meal? And somehow the kids found a way to go out there and do it, and I’m just really proud of them.”

Earlier in the day, Ole Miss (35-24) broke up a no-hitter in the ninth to defeat Texas A&M 1-0. Lefty John Doxakis hurled eight innings for the Aggies without giving up a hit while Mississippi freshman Doug Nikhazy (7-3) was credited with the win after giving up only three hits in eight scoreless innings.

Coupled with Wednesday’s 2-0 setback to Georgia, the loss eliminated Texas A&M, which didn’t score a run during its short stay in Hoover, from the tournament.

Ole Miss will play Arkansas, which dropped a 3-1 contest to Georgia on Thursday, at 3:30 p.m. this afternoon.

A 20-hit barrage enabled the Jayhawks to outscore Kansas State 15-14 while Texas Christian exploded for 14 runs in the fourth inning while winning a 15-3 laugher against Oklahoma in a pair of elimination games earlier in the day.

In the winner’s bracket, which featured four nationally-ranked teams, junior right-hander Alek Manoah tossed a one-hit gem through eight innings as nineteenth-ranked West Virginia (36-18) advanced to the Big 12 Championship semifinals with a 5-1 win over tenth-ranked and top-seeded Texas Tech (37-16) while No. 11 Oklahoma State (34-17), giving up only two hits, shut out 18th-ranked Baylor (34-16) 5-0.

UConn (35-22) and Cincinnati (28-29) remained unbeaten in the AAC tournament in Clearwater, Florida, after the Huskies toppled Wichita State in a 9-7 thriller and the Bearcats downed Tulane 8-4 in the winner’s bracket on Thursday.

Junior Jacob Southern hit a pair of doubles while driving in five runs as Jacksonville University (32-25), tallying three runs in the top of the tenth, defeated the Liberty Flames 9-6 late Thursday night to advance to Friday’s winner’s bracket where it will face defending champion Stetson.

The Hatters, playing the tournament on their home field in DeLand, defeated Lipscomb 6-5 earlier in the day.

Meanwhile, North Florida stayed alive in the double-elimination tournament with a 10-5 rout of top-seeded Florida Gulf Coast in Thursday’s opening game, eliminating the Eagles from the tournament. FGCU had won the A-Sun regular season championship.

The Ospreys will play Liberty in an elimination game at 4 p.m. Friday.

Top-seeded Central Michigan (44-12) won its sixteenth straight game with an 18-9 pounding of Ohio University and second-seeded Ball State (37-17) pummeled Northern Illinois 10-4 while Miami of Ohio (37-18) survived an elimination game with Kent State in the Mid-American Conference tournament at Sprenger Stadium in Avon, Ohio.

Junior third baseman Landon Stephens homered twice for the RedHawks and Cole Andrews and Mackay Williams each sent one out of the park in Miami’s 8-5 victory.

The Lopes and the Aggies are the only remaining undefeated teams in the double-elimination tournament in Mesa, Arizona, and will play each other in a late night encounter on Friday.

Right-hander Codie Paiva (7-5) tossed a five-hitter as Loyola Marymount (30-23) stymied Brigham Young 4-1 in the opening game of the West Coast Conference tournament at Banner Island Park in Stockton, California, yesterday. With the loss, the Cougars dropped to 36-16 on the season.

Saint Mary’s (34-20) scored five runs in the top of the first in downing second-seeded Gonzaga 7-3 in yesterday’s second game. Freshman Bryce Willits homered and had 3 RBIs for the surging Gaels, who have won seven of their last eight games.