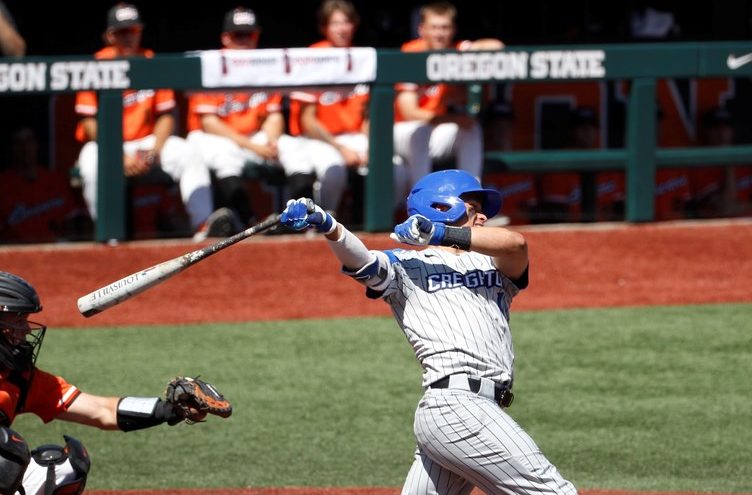 Right-hander Evan Johnson limited defending national champion Oregon State to one run on three hits in 5 and 1/3 innings and junior reliever John Sakowski gave up just one base hit in three and two-thirds innings as Creighton (39-12) avoided elimination in the Corvallis Regional with a stunning 4-1 victory over the Beavers in front of a crowd of 3,402 at Coleman Field at Goss Stadium on Saturday.

Junior Isaac Collins belted a solo home run in the third inning to give Creighton an early lead. It was the team’s first run in the regional after being shut out by Michigan 6-0 on Friday.

The Bluejays expanded their lead to 3-0 later in the inning before Oregon State got on the board with a sacrifice fly in the bottom of the fourth.

Redshirt sophomore Alex McGarry and versatile senior Zak Taylor each had a pair of hits for the Beavers, but aside from their production the defending national champions just couldn’t get anything going offensively against Johnson and Sakowski.

Johnson (9-2) picked up the win while Oregon State starter Grant Gambrell (5-3) was tagged with the loss.

The loss eliminated Oregon State from the NCAA Tournament. OSU, which unexpectedly fell to upstart Cincinnati — the tournament’s aspiring Cinderella — in yesterday’s opening round, ended the season with a 36-20-1 mark.