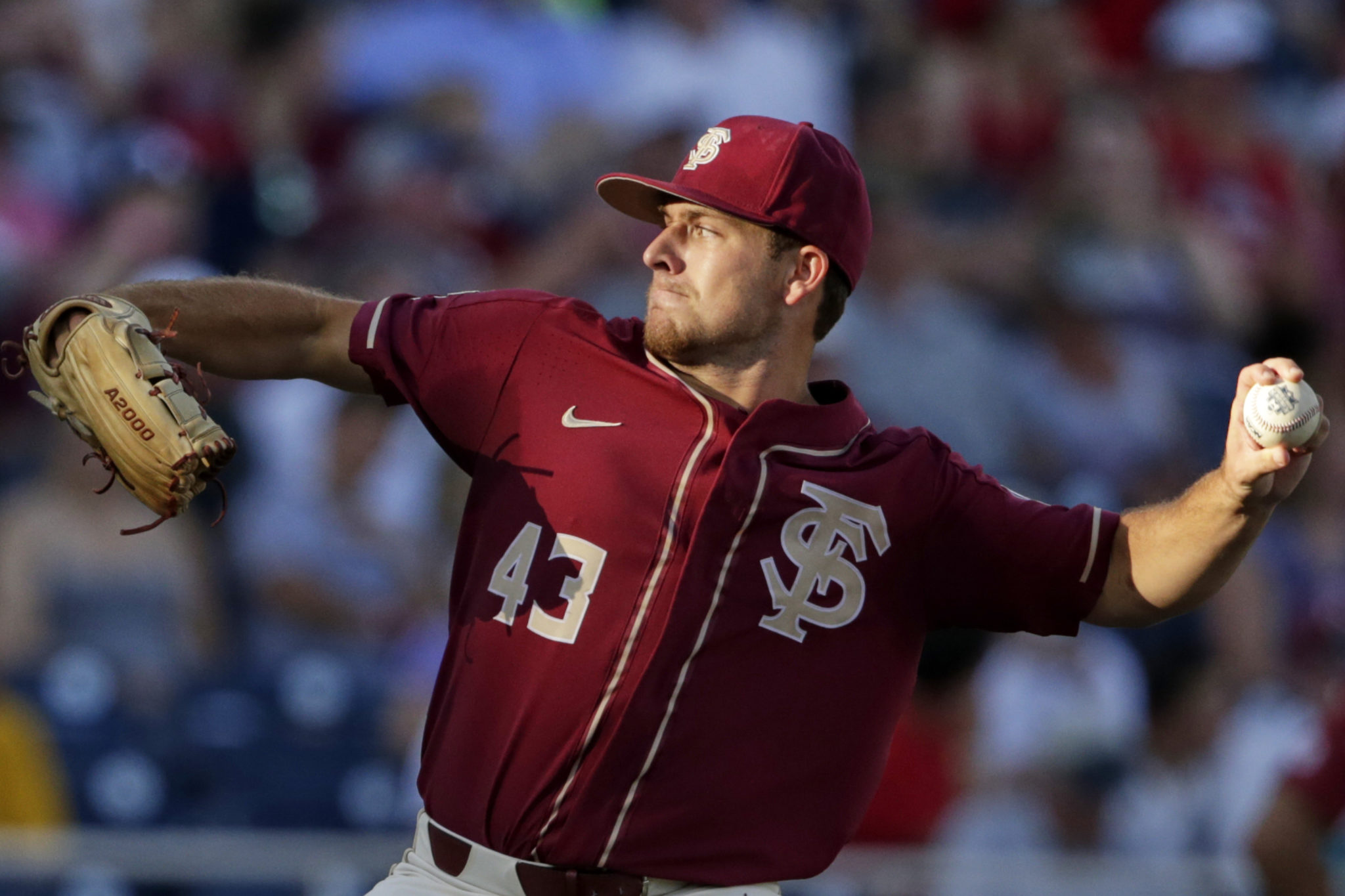 Florida State ace Drew Parrish (9-5) brilliantly worked his way out of several jams while striking out nine batters in eight innings as the Seminoles nipped Arkansas 1-0 before a throng of 26,155 at TD Ameritrade Park in Omaha Saturday evening in the second game of the College World Series.

Marvelously mixing up a changeup, fastball and breaking ball that consistently confounded hitters, Parrish allowed only five hits in what may have been the best performance of his collegiate career.

“I’d say it’s one of the best performances of my life for sure,” the elated left-hander remarked after the game. “Every kid dreams of pitching at the College World Series so this definitely ranks up there.”

The shutout was Florida State’s fifth in CWS history and the school’s first since 1987 when the Seminoles blanked Arizona State 3-0 in an elimination game. In 1970, FSU pitchers hurled three shutouts in the World Series in defeating Arizona 4-0, Dartmouth 6-0, and Ohio University 2-0 before losing to USC in the finals.

Florida State scored the game’s only run in the top of the ninth on a sacrifice fly by freshman Nander De Sedas.

The game-deciding inning started when FSU outfielder J. C. Flowers, who had made a spectacular catch against the wall in the second inning, was hit by a pitch. Carter Smith, the next batter, reached base on a fielder’s choice and Flowers advanced to second when the ball spurted loose on a tag attempt.

With runners on first and second, catcher Matheu Nelson laid down a perfect sacrifice bunt to advance Flowers and Smith to second and third base, respectively.

That’s when De Sedas lifted the ball into right field, allowing Flowers to score from third.

J. C. Flowers, who started the game in centerfield, picked up the save by retiring the side in the bottom of the ninth. It was his thirteenth save of the year.

Cody Scroggins (3-1) was tagged with the loss for the Razorbacks.

“Y’all saw the same game that I did, and that was just a masterpiece of pitching by these two men,” said the 75-year-old Martin during a post-game press conference. “It was a game in which you’re on the edge of your seat the entire nine innings. It was extremely well played by both teams. Isaiah pitched beautiful baseball for them, also.”

While Florida State (42-21) has won six straight games in the NCAA Tournament — a remarkable achievement considering the Seminoles were one of the last at-large teams selected in the 64-team field — Martin cautioned that there’s still a long way to go.

“We don’t know what’s going to happen,” he said. “I can’t sit here and say we’re in the driver’s seat. This field is strong. This field is really impressive. So this tournament is a long way from being in anybody’s hands.”

Michigan, which captured the CWS in 1953 and 1962, is hoping to become the first Big Ten team to win the College World Series since the Ohio State Buckeyes won the national championship in 1966.

The Minnesota Gophers have won the most national championships of any Big Ten team, winning the College World Series in 1956, 1960 and 1964.

In Sunday action, eleventh-ranked Louisville (49-16) plays second-ranked Vanderbilt (54-11) at 2 p.m. and unranked Auburn (38-26) faces third-ranked Mississippi State (51-13) at 7:30 p.m. The Louisville-Vanderbilt game will be aired nationally on ESPN and the Auburn-Mississippi State contest will be carried on ESPN2.