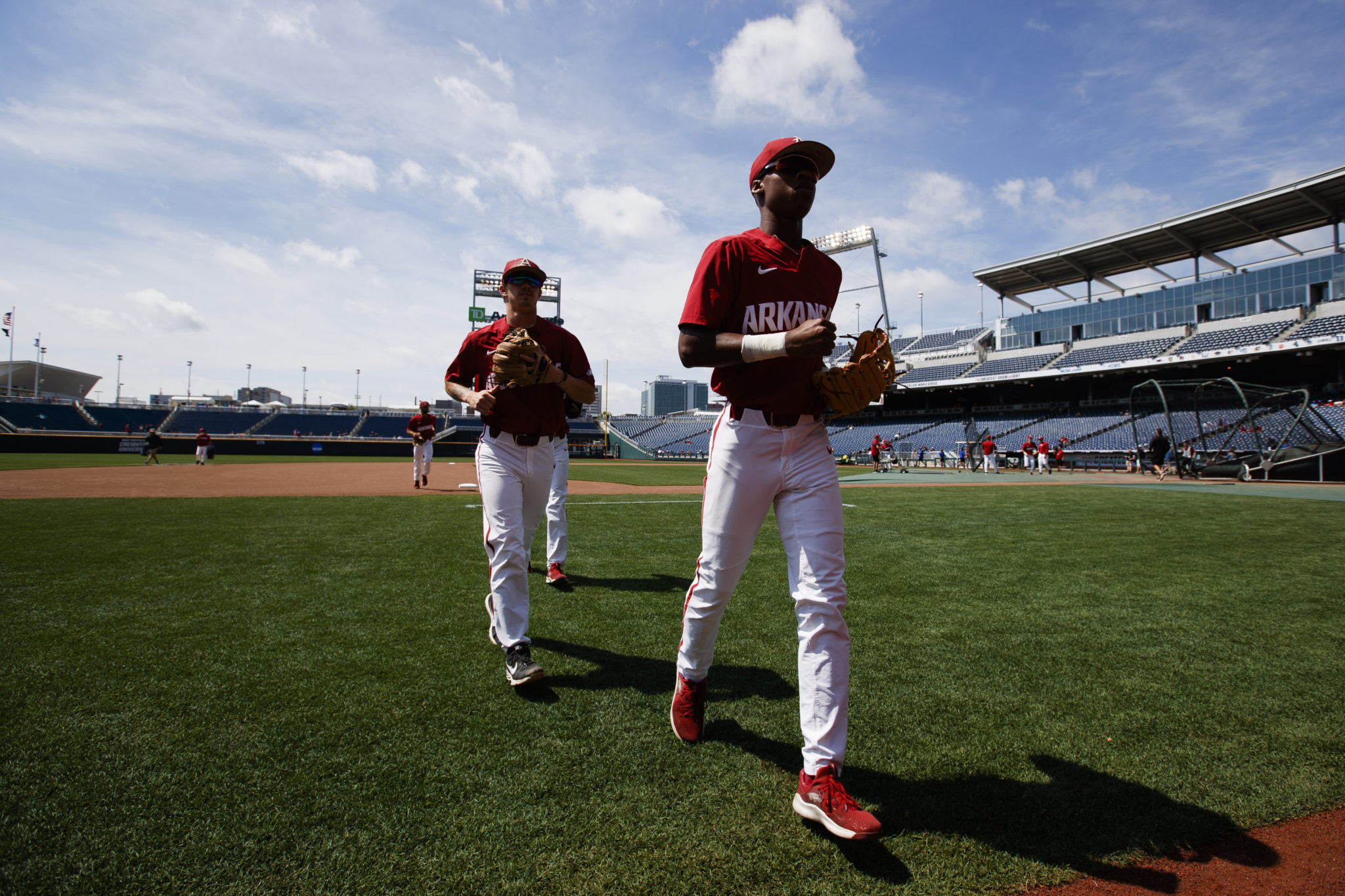 OMAHA, Neb. — Arkansas was so close to winning its first national championship in baseball last year that Casey Martin, from his position at third base, started seeing the celebratory dogpile in his mind’s eye.

Oregon State was batting in the top of the ninth inning with two outs and a runner on third base. Arkansas led 3-2 and was on the verge of a two-game sweep in the College World Series finals.

“Man, I was starting to get real excited, real jumpy,” Martin, now the shortstop, recalled Friday. “Then when it happened, something just kind of dropped.”

Something dropped, all right.

In perhaps the most memorable play at TD Ameritrade Park since it opened in 2011, Oregon State’s Cadyn Grenier popped a ball high behind first base and toward the stands. Three fielders converged. No one took charge. The ball hit the ground.

Given another chance, Grenier singled to start a three-run ninth that gave the Beavers a 5-3 win, and the next night OSU wrapped up the national title on Kevin Abel’s two-hitter in a 5-0 win.

The Razorbacks’ party line: They didn’t allow themselves to stew over their misfortune and let it carry over to this season. Only three everyday players from 2018 returned, none of them principles in the foul ball play.

Now No. 5 national seed Arkansas is back at the CWS, and the Hogs might be better than a year ago with an offense in the top 20 nationally in the major categories and four pitchers drafted in the first nine rounds.

“For me, personally, it was hard to let go,” Martin said of last year’s missed opportunity. “But what a ride it was. I’m just happy we were able to get back.”

Arkansas (46-18) opens play Saturday night against Florida State (41-21), which will be trying to win retiring coach and NCAA all-time wins leader Mike Martin his first national championship in his 17 visits to Omaha.

“I think some guys feel like we have some unfinished business up here, just because we want to win the national championship and be the first one in Arkansas history,” Hogs pitcher Isaiah Campbell said. “We have new kids who weren’t even here last year, they were playing summer ball. We kind of want to make our own history and write our own story this year.”

Coaches were asked if their team couldn’t win the title, who would they want it to go to? Mike Martin, hands down. The 75-year-old with 2,028 wins over 40 years was praised more for his gentlemanly demeanor than for his considerable coaching prowess.

Texas Tech shortstop Gabe Holt is day-to-day with a fracture between the knuckle and tip of his left thumb. He was hurt in the second game of the super regional against Oklahoma State and sat out Game 3.

Michigan hasn’t been to the CWS since 1984, but the Wolverines were at TD Ameritrade Park just three weeks ago for the Big Ten Tournament. They won three of five games, enough to get them one of the last four at-large bids to the national tournament.

Mississippi State’s Chris Lemonis and Louisville’s McDonnell are best friends, having played together in the CWS for the Citadel in 1990 before going into coaching. Lemonis was an assistant to McDonnell at Louisville from 2007-14, and now their teams are in the same bracket.

“He’s the godparent of my kid and everything else,” Lemonis said. “We have a huge Citadel group coming, so you can imagine all our teammates and everything will be a part of it, and it’s a neat thing.”

Auburn coach Butch Thompson lobbied the locals to root for the Tigers, who have the fewest wins of any team in the field and finished sixth in the seven-team SEC West. Auburn was last in Omaha in 1997, and Thompson dropped the name of ex-Tiger and major-league pitcher Gregg Olson.

“We’re the underdog. We are a great team to root for for any people in Omaha trying to adopt a ballclub, with being the first time,” Thompson said. “It’s a neat story, and Gregg Olson is one of our greatest players that chose Auburn from being right here in Omaha, Nebraska. So maybe that’s another good reason to pull for us.”

Vanderbilt coach Tim Corbin said he appreciated Louisville’s McDonnell being supportive to his wife, Maggie Corbin, during last week’s super regionals. At the time, McDonnell’s team had just clinched a CWS bid in two games against East Carolina, and Vanderbilt was about to start Game 2 against Duke after being beaten 18-5 the night before.

“He’s texting my wife to make her feel good during our super regional, which was kind of him, and just telling her to hang in there,” Corbin said. “I know our teams will just be playing one another, but we’ve become very close through the years, and if he continues texting her during our game, I guess it’s good and bad. It’s good that he’s distracted, it’s bad that there’s something going on that I don’t know about.”