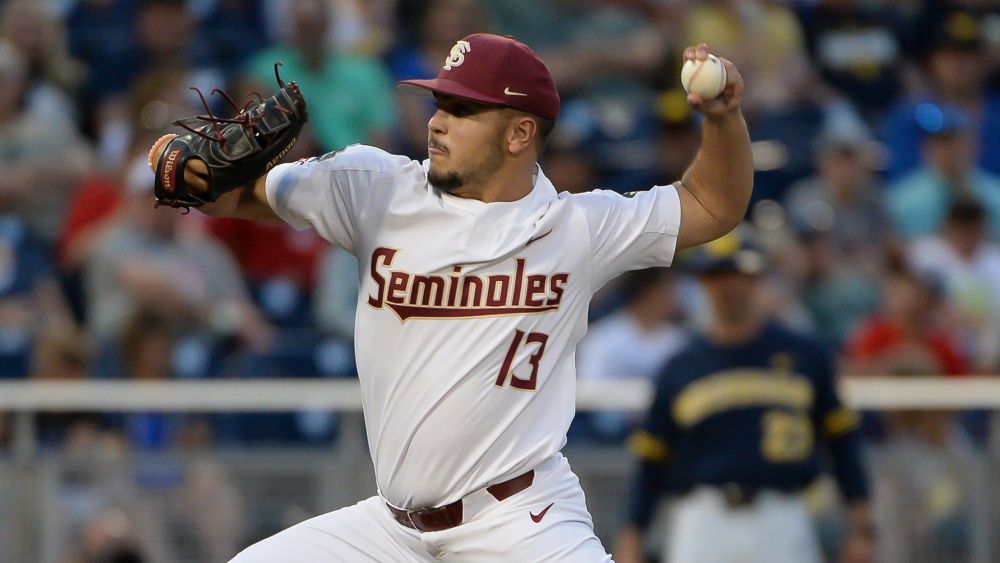 Lefthander Tommy Henry (11-5) struck out ten while allowing just three hits as Michigan (48-20) shut out Florida State 2-0 on Monday evening before a crowd of 23,541 at TD Ameritrade Park in Omaha.

It was the third College World Series complete-game shutout in Michigan history.

A double by Florida State shortstop Mike Salvatore in the bottom of the first inning went for naught as Henry, a junior from Portage, Michigan, retired the next twelve batters and didn’t allow another hit until a ground-rule double down the leftfield line by Mat Nelson in the seventh inning.

Salvatore had two of the three hits in the contest for the Seminoles, who have scored only one run in their first two games in Omaha.

Florida State head coach Mike Martin had nothing but praise for the Michigan lefthander. “I can see why Tommy Henry is a second-rounder,” said the 75-year-old Martin. “That was beautiful — that was a masterpiece. He just really, really made it tough on us.”

“Well, in the biggest game in Michigan baseball history in a long, long time, we got the best pitching performance of Tommy Henry’s career,” said Bakich, who is in his seventh year at the helm. “He was the entire story line tonight. We needed a strong performance, and he gave us something magical tonight. I think we’re all just in awe and very appreciative of holding down a very good Florida State team tonight, who’s been extremely hot and finding every single way to win.”

Michigan scored early, jumping out to a 1-0 lead in the top of the first inning on a solo home run by outfielder Jesse Franklin — the sophomore’s thirteenth blast of the season. The Wolverines added to their lead in the fifth on an RBI single by senior Jimmy Kerr.

With last night’s victory, the Wolverines are now 2-0 in the College World Series for only the third time in program history. Michigan won the national championship the two previous times it got off to a 2-0 start in Omaha, capturing the CWS crown in 1953 and again in 1962.

The loss sends the Seminoles (42-22) into the loser’s bracket where they will face Texas Tech (45-19) — a come-from-behind 5-4 winner against Arkansas in an elimination game yesterday afternoon — at 7 p.m. on Wednesday. The winner of that game will play Michigan on Friday. The winner of the FSU-Texas Tech game will have to defeat the Wolverines twice to advance to the best-of-three championship series.

The loss — FSU’s first in the NCAA Tournament — didn’t dampen the team’s determination to give retiring head coach Martin his first College World Series ring in the final season of his remarkable 40-year career.

“Our mentality isn’t going to change, we’ve had our backs against the wall all season,” said third baseman Drew Mendoza. “We will be ready to go on Wednesday and get to play another day.”