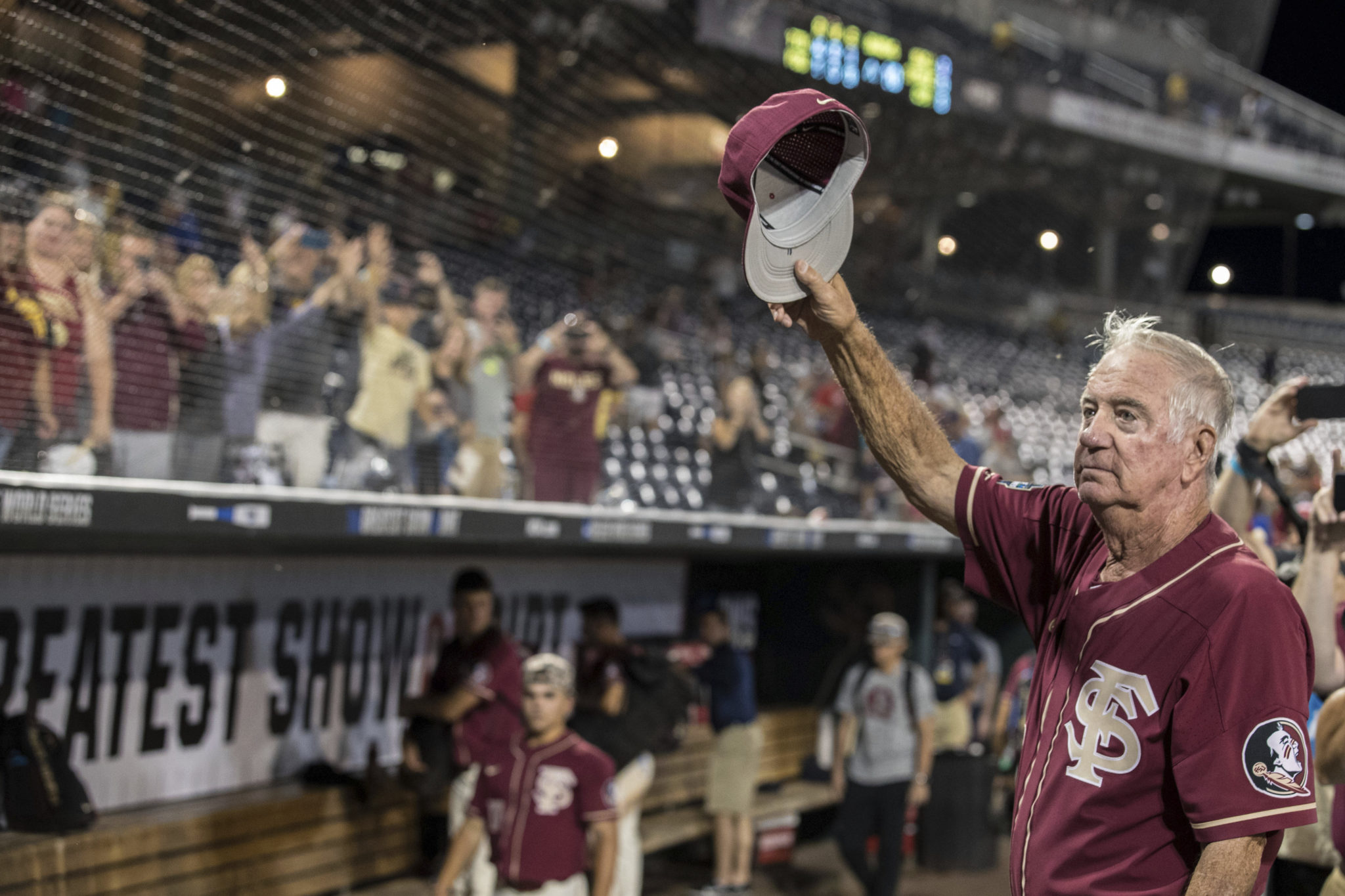 OMAHA, Neb. — When Texas Tech’s Taylor Floyd struck out Reese Albert to end the game — and Mike Martin’s career — the Florida State coach walked up the dugout steps, took off his glasses and strode across the field to shake hands with the opposing coach one more time.

While the fans at TD Ameritrade Park showered Martin in applause, his wife of 55 years, Carol, greeted well-wishers in the stands. Martin then waved to and thanked fans who gathered above the dugout.

After the 4-1 loss in the elimination game, Martin heads into retirement with 2,029 career wins — most by any coach in any college sport. Each of his 40 teams won at least 40 games and played in the NCAA Tournament.

But, he never won a national championship.

“I can fake a smile with the best of them and I’ll get through the rest of this night with a smile because I got to watch young men grow up,” Martin said. “I got to work for Florida State for 45 years and I’ll never forget the times I’ve had out here in Omaha.”

Brian Klein broke a 1-1 tie in the sixth with his second homer in three games, and third of the season, and Texas Tech (46-19) won a second game at a CWS for the first time in its four appearances.

“In the back of your mind, obviously, you’re thinking about ’11’ a little bit,” Tech coach Tim Tadlock said, referring to Martin by his nickname. “All the respect in the world for him. Love him, and just appreciate everything he’s done for college baseball.”

FSU (42-23) had no trouble scoring while sweeping through a regional in Athens, Georgia, and a super regional at Baton Rouge, Louisiana, to earn Martin his 17th trip to the CWS. The Seminoles beat Arkansas 1-0 here Saturday, but lost 2-0 to Michigan before the Red Raiders eliminated them.

Martin’s last team was one of the final four squads awarded at-large bids to the 64-team national tournament after struggling for stretches of the regular season.

“To have the success we’ve had the last three years, the ACC championships, two trips to Omaha, 40 wins every year,” third baseman Drew Mendoza said. “To experience that with him and be part of his legacy is a dream come true.”

The Seminoles batted .124 in Omaha (11 of 89) and their two runs in three games tied a CWS record low. Their 0-for-17 batting with runners in scoring position was the lowest by a team in at least 20 years, according to ESPN. Florida State also struck out 15 times against Texas Tech.

“Who would have ever thought six weeks ago that we would even get to Omaha?” Martin said. “The young men are disappointed now. What they accomplished will not go unnoticed — to get to Omaha and have an opportunity.”

Cameron Warren put Tech up 1-0 in the fourth when he chopped a grounder past diving Mendoza at third, allowing Dylan Neuse to score from second.

The Seminoles’ only run came in the bottom half thanks to Tech mistakes. Bryce Bonnin (7-1) walked Robby Martin on four pitches and hit Matheu Nelson in the bill of his batting helmet. The runners moved over on a bunt, and Martin came home when catcher Braxton Fulford threw into center field trying to pick off Nelson at second.

The Red Raiders went ahead for good when Klein lofted an off-speed pitch from Conor Grady (9-6) into the right-center bleachers for his ninth homer in 150 career games.

“I have no idea where the home runs started to come from, but today it happened that it gave us a really big run, and I’m super thankful for it,” Klein said.

Chase Haney pitched two shutout innings in relief of Grady, and then Martin went to J.C. Flowers. Texas Tech pounced on the star closer, who didn’t record an out and gave up three singles, with Klein reaching on a dropped third strike.

Flowers left with the bases loaded, and it was 4-1 when Antonio Velez walked in a run.

The Seminoles had at least one runner on base each inning and looked as though they might get something going in the eighth when, with a man aboard, Carter Smith sent a drive into the right center gap. But center fielder Dylan Neuse laid out to make the catch.

Floyd pitched one-hit shutout relief over the last four innings for his fifth save.

“Probably the biggest thing, this group, they really like to play,” Tadlock said. “They’re not going to let some type of circumstance, the results dictate their effort and their preparation. They’ve been really good about respecting the game and trying to play the game the right way. Not saying we always get great results, but as long as the preparation is right, we’re happy with them.”

Texas Tech plays Friday against Michigan. The Red Raiders would have to beat the Wolverines and again Saturday to reach the best-of-three finals next week.