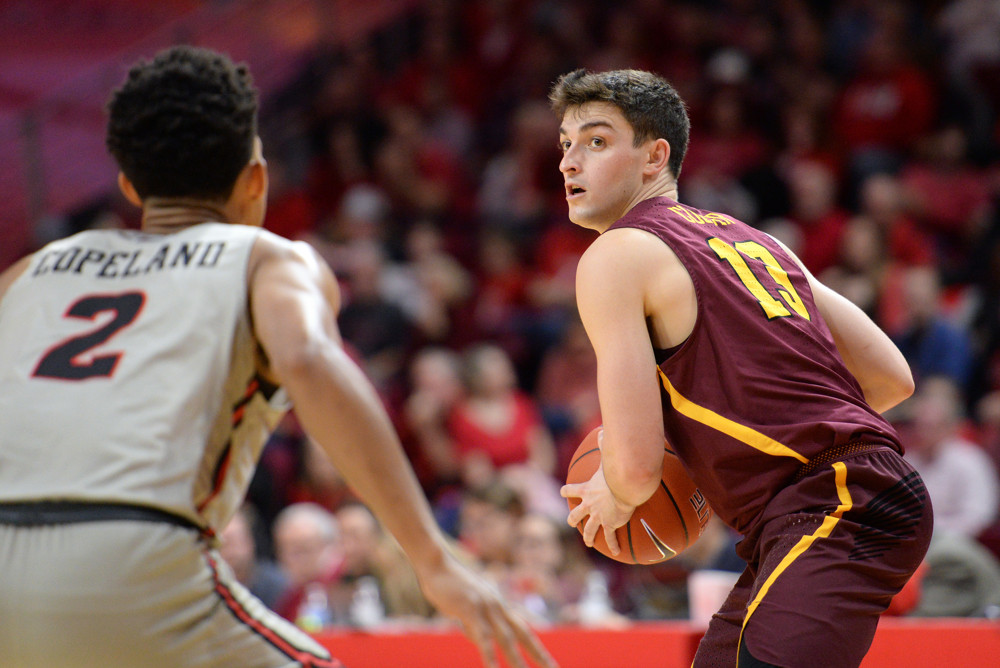 The tournament, which traditionally draws 45,000 spectators and is affectionately known as “Arch Madness,” promises to be another exciting one as top-seeded Loyola, which shared the regular season conference title with first-year head coach Darian DeVries’ surprising Drake Bulldogs (23-8), hopes to stave off nine other teams, each with visions of playing the role of this year’s Cinderella in the NCAA Tournament.

Hoping to become the MVC’s first repeat champion since Northern Iowa in 2015 and 2016, the Ramblers took the No. 1 spot this year on a tiebreaker, having swept both regular-season games with Drake.

While a repeat of last year’s once-in-a-lifetime magical run in the NCAA Tournament seems highly unlikely, Porter Moser’s Loyola of Chicago Ramblers are nevertheless set to defend their Missouri Valley title as the conference postseason tournament gets underway at the Scottrade Center in St. Louis with opening round contests later tonight between the league’s four lowest-seeded teams.

In a conference no longer dominated by Wichita State, which bolted for the supposedly greener pastures of the American Athletic Conference (AAC) following the 2016-17 season, this is expected to be one of the most wide open fields in recent years with as many as six or seven teams, including Drake and Missouri State — the latter of which won both regular season matchups with Loyola, punctuated by a 70-35 pummeling of the Ramblers in late January — having a legitimate shot at getting their ticket punched for the Big Dance.

Coach Moser acknowledges that almost anybody could win the tournament. “I think it’s going to be the most balanced, hard-fought Arch Madness in many years with how balanced these teams are,” he said recently, adding that “anybody can beat anybody.”

The fact that this is the first time in memory that the regular season champion — or in this case, the regular season co-champions — lost six games in conference play illustrates just how competitive and uncertain this tournament is likely to be. Only three games separated the top seven teams in the conference. Even tenth-seeded Evansville (11-20) can’t be entirely counted out given that the Purple Aces defeated Loyola, Drake and Missouri State, winning the latter game on the road, during the regular season.

Evansville plays Dan Muller’s always dangerous Illinois State Redbirds, the seven seed, in tonight’s opening round. Illinois State has appeared in the tournament’s championship game six times in the past eleven years, coming up short each time, including last year when they lost to Loyola 65-49. The Redbirds haven’t been in the NCAA Tournament in more than twenty years. Eighth-seeded Indiana State plays No. 9 Valparaiso in the other opening round game. The Crusaders, who dropped both regular season games to the Sycamores, have lost six of their last seven contests and ten of their last twelve.

If history is any indication, Drake — sporting the best overall record in the conference — could be in a sweet spot as the No. 2 seed in the tournament has won the Missouri Valley’s coveted automatic berth to the NCAA Tournament more times than any other seed, winning the title ten times since the tournament was moved to a neutral site in 1991. The second-seeded team, moreover, had only lost its opening game in the tournament once in the past twenty-eight years, which should bode well for the upstarts from Des Moines in their quarterfinal game on Friday against the winner of tonight’s Illinois State-Evansville contest.

Sparked by the sensational play of 6-8 senior standout Nick McGlynn, who finished second in the balloting for the MVC’s Most Valuable Player behind Loyola’s Townes, and the deadly outside shooting of 6-4 Iowa transfer Brady Ellingson, who has made a blistering 79 of 164 shots from beyond the arc this season, the Bulldogs won six of their final seven regular season games and hope to make their first NCAA appearance since 2008. Like this year’s team, the 2007-08 squad was also picked to finish ninth in the Missouri Valley’s preseason poll.

If last year’s quarterfinals were any indication, this is going to be a memorable tournament. Last season’s quarterfinals featured four pressure-packed and thrilling games, all of which were literally decided in the final minute of play, including Loyola’s heart-stopping 54-50 win against upset-minded Northern Iowa — a team the Ramblers had pummeled 70-47 in their last meeting. The Arch Madness matchup between the two teams was quite a different story and was still in doubt with thirty seconds left to play, but the Panthers missed an opportunity to tie the game when Isaiah Brown’s three-pointer missed the mark.

Taking the court for the second time in sixteen hours, Northern Iowa appeared primed to pull off a major upset against Moser’s team of destiny. Playing one of their best defensive games of the season, the Panthers gave the Ramblers fits from the opening tip-off, including limiting Clayton Custer — the MVC’s Player of the Year — to one of seven from the field while keeping the outcome in doubt until the final seconds. Loyola just couldn’t find its offensive rhythm against UNI’s stingy defense, which performed at a championship level the entire afternoon, and was lucky to survive the quarterfinal tilt.

Loyola’s narrow victory propelled the Ramblers into the semifinals against fifth-seeded Bradley, a 63-61 winner over Drake in another last-minute thriller when 6-7 senior forward Donte Thomas, who scored 13 points and pulled down 14 rebounds, scored on a put-back with 1.2 seconds remaining.

The other two quarterfinal games were just as dramatic as Illinois State pulled away from Indiana State to win 77-70 in a game that was still in doubt with 46 seconds left to play, while Barry Hinson’s Southern Illinois, which finished second in the regular season, four games behind Loyola, narrowly defeated preseason favorite Missouri State for the third time that season with a 67-63 victory in a game decided in the final seconds after SIU’s Sean Lloyd poked the ball away from Missouri State’s Ryan Kreklow, leading to a fast-break layup triggered by the Salukis’ Tyler Smithpeters to put the game away.

The 17 points separating the eight teams that day was the smallest combined margin of victory in the history of the Missouri Valley Conference quarterfinals.

One can expect the same kind of nail-biting intensity in Friday’s quarterfinals when Loyola faces the winner of the Indiana State-Valparaiso contest at noon, fourth-seeded Missouri State battles fifth-seeded Bradley in the second afternoon game, MVC co-champion and No. 2 seed Drake takes on the winner of the Illinois State-Evansville game at 7PM while third-seeded Southern Illinois, which has won three straight heading into the tourney, mixes it up with Northern Iowa in the nightcap.

Could another magical run be in store for the improbable Ramblers? We’ll know in a couple of days. In the meantime, Loyola coach Porter Moser implored their fans to keep the faith. “Don’t go anywhere,” he said in addressing an enthusiastic crowd at Gentile Arena following the team’s regular season finale against Bradley on Saturday. “We’re not done yet.”