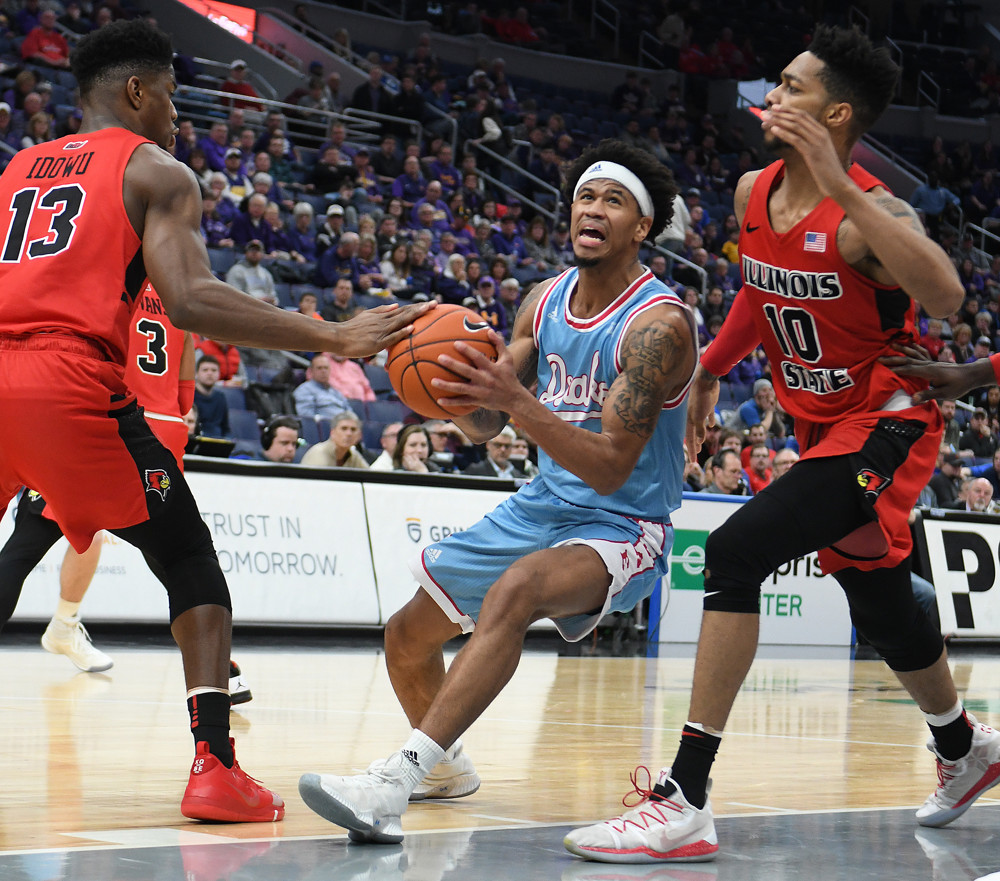 In a game that saw seven lead changes and was tied on four occasions in the final fifteen minutes, fifth-seeded Bradley (18-14) rallied from a seven-point halftime deficit to defeat Missouri State 61-58 in today’s second quarterfinal game at the Enterprise Center in St. Louis.

Missouri State, which had an opportunity to send the game into overtime when a 3-pointer missed the mark in the closing seconds, had defeated Bradley twice during the regular season, winning by five at the Carver Arena in Peoria and smothering the Braves 55-37 in Springfield.

It was the seventh time this season that Brian Wardle’s Braves had rallied from a halftime deficit and the fourth time against a conference opponent, equaling the same number of come-from-behind victories posted during the 2012-13 season.

Darrell Brown, a 6-4 junior guard who averages 13 points per game, paced Bradley with 20 points — ten of them coming at the charity stripe. Sophomore Elijah Childs, a 6-7 forward from Kansas City, chipped in a dozen points and snared seven boards.

Senior guard Jarred Dixon led the Bears, who dropped to 16-16 on the season, with 17 points.

Bradley, which dropped its first five conference games before beating Southern Illinois in Carbondale on January 20th, will face defending champion and top-seeded Loyola in tomorrow’s semifinals. The two teams split during the regular season, both winning on their home court.

Tremell Murphy scored a season-high 26 points as short-handed Drake (24-8) also advanced to the semifinals with a convincing 78-62 win over Illinois State (17-16). Murphy’s twin brother, Anthony, had 16 points and a game-high ten rebounds for the victorious second-seeded Bulldogs.

Entering today’s quarterfinal game, the dynamic duo with their amazing wingspan and athleticism from Griffith, Indiana, averaged a combined 16 points and 10.1 rebounds per game during the regular season.

Nick McGlynn, Drake’s leading scorer during the regular season, injured his knee early in the first half and did not return. Seven-foot first year forward Liam Robbins played in his absence, scoring five points and grabbing an equal number of rebounds.

Illinois State started out slowly, scoring a season-low 17 points in the first half and went into the locker room trailing 37-17. With their season on the line, Dan Muller’s Redbirds staged a furious second-half comeback, managing to get within 9 points of Drake three different times in the final 5:05, but couldn’t get any closer. The mountain was simply too steep.

As was true of the loser in the Bradley-Missouri State contest, the Redbirds — last year’s tournament runner-up to Loyola — had defeated Drake in both previous meetings this season.

It was Drake’s first win in the tournament affectionately called “Arch Madness” since 2013.

The Bulldogs will face sixth-seeded Northern Iowa, a 61-58 upset winner over No. 3 seed Southern Illinois in last night’s late quarterfinal game, in tomorrow’s second semifinal contest. The Missouri Valley’s two Iowa schools haven’t met in the tournament since 2010. They split their regular season games with each team winning narrowly on their own court.

Like Bradley and Drake in their quarterfinal games, the Panthers had lost both regular season games to the Salukis, losing by seven in Cedar Falls and by eight in Carbondale. UNI was in danger of losing to SIU for the third time this season when Aaron Cook hit a go-ahead trey to briefly put the Salukis, who trailed by as many as eleven points in the second half, ahead 58-57 with 31 seconds remaining.