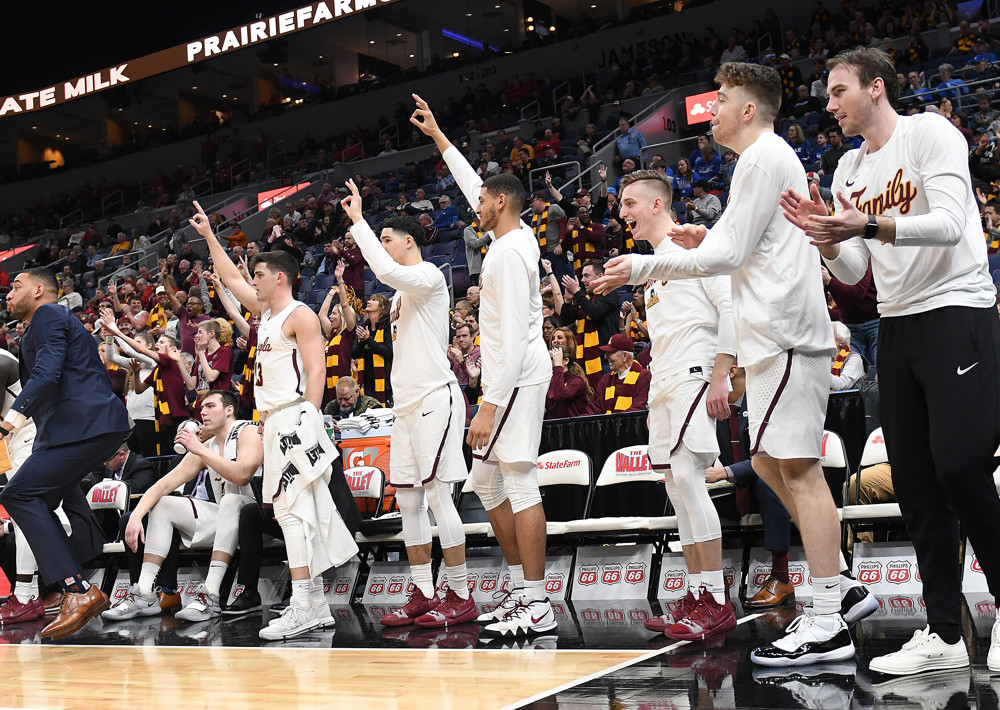 ST. LOUIS, MO: The Loyola bench reacts after a three-point shot in the first half during a Missouri Valley Conference Basketball Tournament game between the Loyola Chicago Ramblers and the Valparaiso Crusaders on March 08, 2019. (Photo by Keith Gillett/Icon Sportswire)

Hoping to repeat last year’s three-game sweep through Arch Madness, Loyola of Chicago had little difficulty defeating Valparaiso 67-54 in the opening game of the Missouri Valley Conference quarterfinals this afternoon. The game wasn’t as close as the final score indicates as the Ramblers jumped out to a quick 9-2 lead and steadily increased their margin to an insurmountable 40-18 after the first twenty minutes of play.

Last year’s darlings of the NCAA Tournament were led by 6-9 center Cameron Krutwig, who scored 18 points in twenty-eight minutes of action. Marques Townes, the Missouri Valley’s Player of the Year, added 15 while grabbing a game-high eight rebounds and dishing off four assists. Sharp-shooting Lucas Williamson, who briefly gave Loyola fans a scare when he landed awkwardly on his ankle, chipped in 10 on four of five from the field, including burying two of three from 3-point range. Williamson missed fifteen games earlier this season with a serious ankle injury.

Eight Ramblers played more than ten minutes as Coach Porter Moser liberally went to his bench with the game pretty much decided early in the second half, if not earlier. Valparaiso (15-18), which was seeking to become just the second opening round team to reach the MVC semifinals, trailed by as many as 27 points at one juncture.

The Crusaders connected on only 36.2 percent of their shots.

The Sister Jean-inspired Ramblers (20-12) will face the winner of the Bradley-Missouri State game in tomorrow’s semifinal.