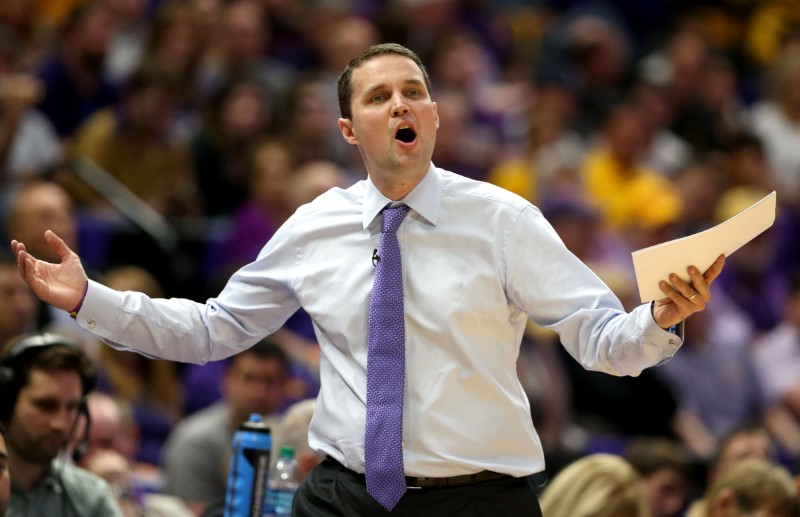 FILE PHOTO: Feb 23, 2019; Baton Rouge, LA, USA; LSU Tigers head coach Will Wade gestures in the first half of their game against the Tennessee Volunteers at the Maravich Assembly Center. (Reuters/Chuck Cook)

BATON ROUGE, La. — LSU has suspended coach Will Wade indefinitely amid reports about his conversations with a person convicted last year of funneling money to the families of basketball recruits.

Tenth-ranked LSU is in the midst of one of the more successful seasons in program history and can guarantee at least a share of the SEC regular season title with a victory Saturday over Vanderbilt.

A Yahoo report on Thursday included excerpts of a wire-tapped phone conversation with Christian Dawkins, who is one of several people convicted in October of conspiracy to commit wire fraud for funneling illegal payments to families of recruits to Louisville, Kansas and North Carolina State. Dawkins also is a defendant in a federal bribery case scheduled for trial scheduled for April 22.

In the report, Wade is described expressing his frustration with an unidentified third party handling the recruitment of player referred to only as “Smart.” LSU has a freshman guard named Javonte Smart who is a former Louisiana high school player of the year.

Wade is quoted on a transcript of the call saying that he made a strong offer that was “tilted toward taking care of” the player and his mother, but that the third party who received the offer was unsatisfied with his “piece of the pie.”

The report also states that it was not clear if the offer Wade discusses would violate NCAA rules, or if the player and his family knew of, or accepted, the offer, of which there were no specific details.

In their statement, Alexander and Wade say “recent media reports regarding Coach Will Wade are without question concerning” to top university officials who are taking “deliberate and purposeful steps to fairly assess and adequately address” the concerns those reports have raised.

The statement also said LSU is “closely coordinating” and fully cooperating with the NCAA on the matter.