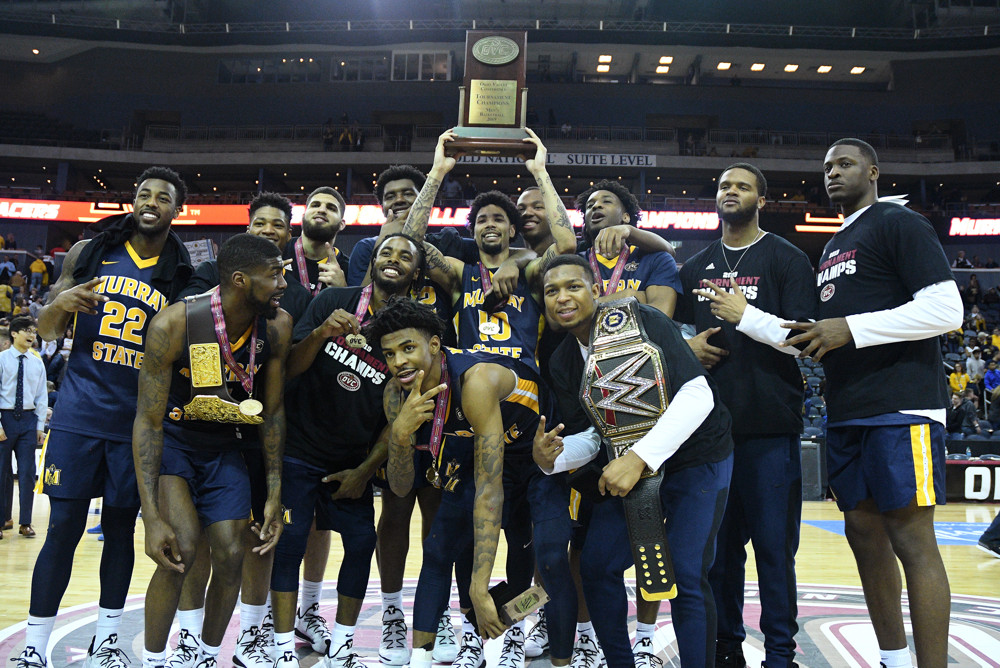 EVANSVILLE, IN - MARCH 09: The Murray State Racers celebrate after winning the Ohio Valley Conference (OVC) Championship college basketball game between the Murray State Racers and the Belmont Bruins on March 9, 2019, at the Ford Center in Evansville, Indiana. (Photo by Michael Allio/Icon Sportswire)

Murray State (27-4) defeated Belmont 77-65 earlier tonight to capture the Ohio Valley Conference championship and its automatic bid to the NCAA Tournament. It was Murray State’s tenth straight victory. It was also the seventeenth time in the school’s history that it claimed the OVC title.

Paced by Ja Morant’s explosive 36-point effort — three points shy of his career high — Murray State held Belmont scoreless for the game’s final three minutes and fifty-one seconds. Morant, the OVC’s Player of the Year and a leading NBA prospect who wowed a record crowd of 10,525 at the Ford Center in Evansville, Indiana, connected on 13 pf 25 shots from the field and was a perfect 9-9 from the charity stripe. Former NBA great Magic Johnson was one of those watching the game at the Ford Center.

Dyland Windler, a 6-8 senior from Indianapolis who averages 21.5 points per game, led Belmont with 17 points and 12 rebounds.

The Racers, who will be making their second straight appearance in the Big Dance, are the first team to officially qualify for the tournament. Three more teams will automatically qualify tomorrow when the Atlantic Sun, Big South and Missouri Valley Conference championship games have concluded.

Belmont (26-5) will now have to anxiously wait for an unlikely at-large bid next Sunday when the NCAA Selection Committee announces the 68-team field. The last time the Ohio Valley Conference had more than one team in the tournament was 32 years ago when Middle Tennessee received an at-large bid after fourth-seeded Austin Peay, a team that lost a dozen games that season, unexpectedly won the conference tournament.

Given the selection committee’s increasing bias toward the nation’s power conferences, Belmont’s chances — or that of any mid-major program that fails to win its conference tournament — of receiving an at-large bid are pretty remote, to put it mildly.

The Bruins, however, are guaranteed a spot in the NIT, a result of finishing as regular season co-champions with Murray State. Both teams posted 16-2 records in conference play.

Murray State, which advanced beyond the NCAA tournament’s first round three times in its previous fifteen appearances — advancing to the second round in 1988, 2010 and 2012 — made its first NCAA appearance back in 1964 when the Cal Luther-coached Racers, rallying furiously from a 26-point deficit with 7:20 remaining, lost to defending national champion Loyola of Chicago 101-91 in the first round