No magical run for the Ramblers this time as Bradley advances 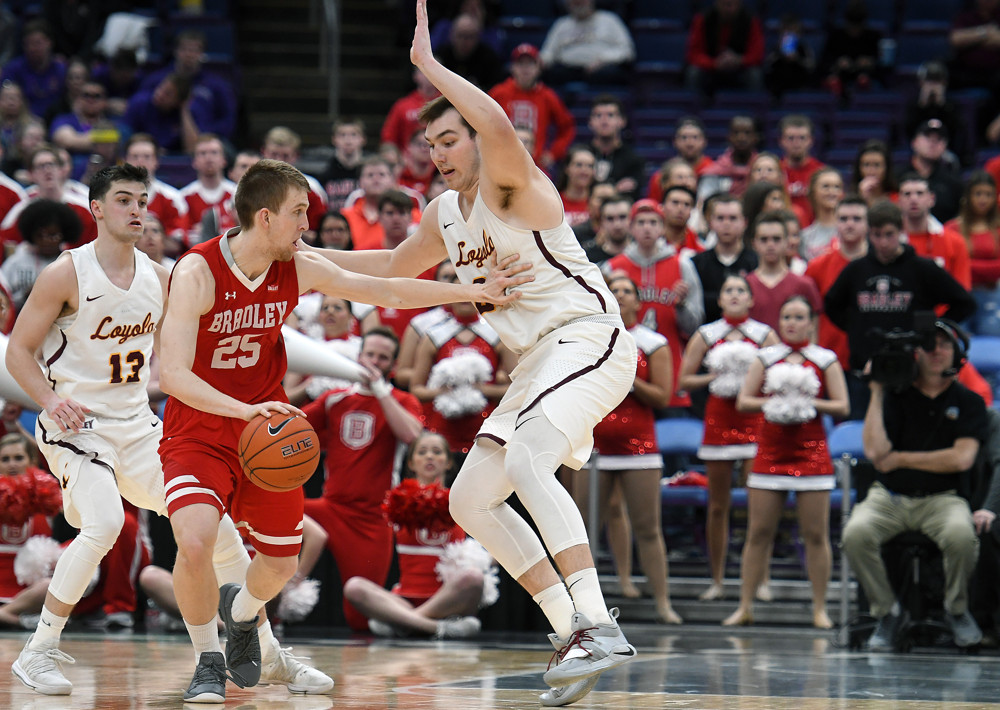 While Loyola’s dreams of mounting another magical run in the NCAA Tournament came to an abrupt end earlier this afternoon, two other Missouri Valley teams are dreaming of making improbable runs of their own.

Avenging an eight-point loss to the Ramblers in last year’s semifinal game, fifth-seeded Bradley (19-14) narrowly defeated Loyola 53-51 in a defensive struggle in which Loyola’s Marques Townes, the Missouri Valley’s Player of the Year, and Clayton Custer — last year’s Player of the Year — were limited to a woeful 7 of 27 from the field.

Coming off the bench, Nate Kennell scored 19 points for the victorious Braves while teammate Elijah Childs recorded a double-double.

The Ramblers (20-13) had a chance to tie the game in the game’s waning seconds, but the 6-4 Townes, who averaged 15.9 points per game in his senior year, missed a jumper on Loyola’s final possession. Townes, who left the game briefly with leg cramps, uncharacteristically went 3 of 17 from the field while scoring only seven points.

Loyola’s players, especially seniors Townes and Custer, took the narrow loss hard. “I’m not going to ask them not to hurt tonight,” said Coach Porter Moser. “They’ve invested too much.”

Loyola’s season will continue in the 32-team NIT as a result of winning the Missouri Valley’s regular season championship — a letdown for fans who were hoping for another miraculous march through the NCAA Tournament — while Bradley will play No. 6 seed Northern Iowa (16-17) tomorrow at 1 p.m. for the Missouri Valley’s automatic berth to the Big Dance.

Northern Iowa defeated shorthanded Drake (24-9) in a thrilling 60-58 nail-biter to advance to the championship game.

The Panthers hope to become the first sixth-seeded team in the history of Missouri Valley Conference tournament to ever win the championship. Bradley and Northern Iowa split their two regular-season games, with each winning on the road.