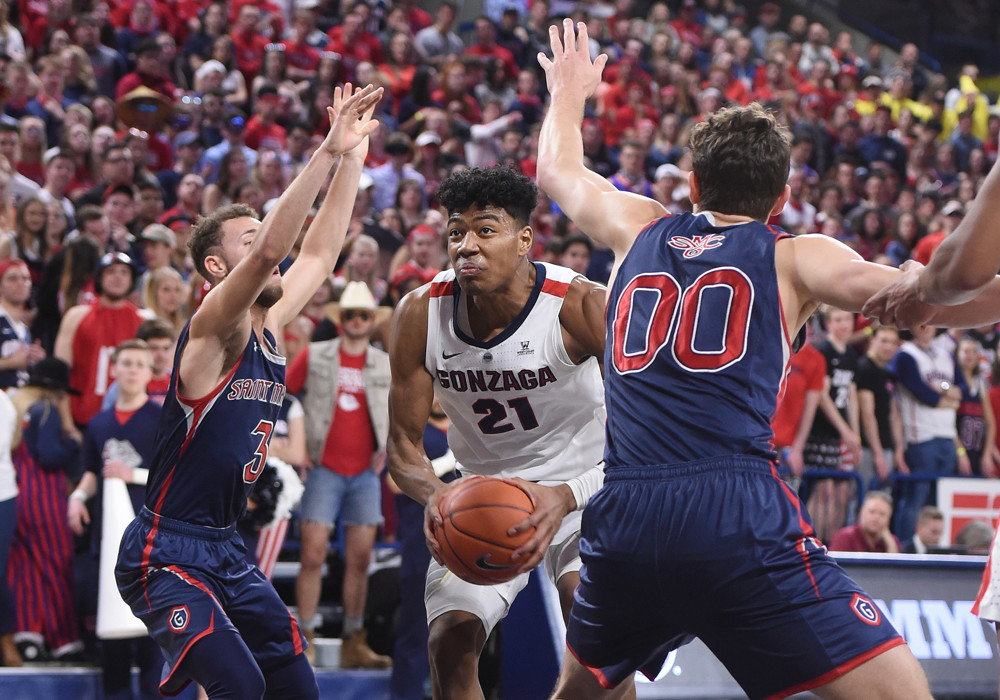 SPOKANE, WA - FEBRUARY 09: Gonzaga forward Rui Hachimura (21) gathers himself before going up to score between St. Mary's guard Jordan Ford (3) and guard Tanner Krebs (00) during the game between the St. Mary's Gaels and the Gonzaga Bulldogs played on February 9, 2019 in Spokane, Washington at the McCarthey Athletic Center. (Photo by Robert Johnson/Icon Sportswire)

Top-ranked Gonzaga is virtually assured a No. 1 seed in the NCAA Tournament regardless of what happens in the West Coast Conference tournament, which begins tonight at the Orleans Arena in Las Vegas and concludes with the championship game on Tuesday.

Tonight’s opening round features the WCC’s four lowest-seeded teams with No. 8 seed Pepperdine (13-17, 6-10 WCC) facing ninth-seeded Pacific (14-17, 4-12 WCC) in the first game and seventh-seeded San Diego (18-13, 7-9 WCC) playing Portland (7-24, 0-16 WCC) in the later matchup. Pacific won both of its regular-season games against Pepperdine, defeating the Waves 66-59 in Stockton in early February and winning a 73-72 thriller at the Firestone Fieldhouse in Malibu on Saturday. Portland, meanwhile, was winless in conference play this year, dropping both of their games to the Toreros by double-digit margins. Fifth and sixth-seeded Loyola Marymount and Santa Clara received first-round byes and will begin tournament action tomorrow. Loyola Marymount (20-10, 8-8 WCC) will take on the winner of tonight’s game between Pepperdine and Pacific while Santa Clara (16-14, 8-8 WCC) will face the winner of the San Diego-Portland game.

The third and fourth seeds in the conference received a double-bye and won’t begin play until the quarterfinals on Saturday while Gonzaga and Saint Mary’s, the WCC’s top two seeds, won’t take to the hardwood until the semifinals on Monday.

If Gonzaga, as expected, prevails in the conference tournament it’s highly unlikely that the West Coast Conference will have more than one participant in the 68-team NCAA Tournament, but at least three teams — St. Mary’s (20-11, 11-5 WCC), Brigham Young (19-12, 11-5 WCC) and San Francisco (21-9, 9-7 WCC) hope to guarantee that at least two teams from the conference are dancing later this month by snagging the conference tournament championship on Tuesday. Despite having relatively decent seasons, all three are currently outside the periphery of the so-called “bubble.”

Snubbed by the NCAA Selection Committee last year after posting an impressive 28-5 regular season record and beating then 13th-ranked Gonzaga in Spokane, Randy Bennett’s Gaels would like nothing more than to poke the committee in the eye by winning the WCC’s automatic berth on Tuesday. Saint Mary’s, which played Gonzaga tough in its season finale — losing 69-55 — has won five of its last six games and seven of its last nine.

BYU, which has won six of its eight final games heading into the tournament, would also like to snatch the title from Gonzaga despite losing badly to the Zags in both regular-season encounters, losing by thirty points in Provo in late January and dropping a lopsided 102-68 contest in Spokane two weeks ago.

Similarly, once-proud San Francisco, a school with one of the richest college basketball traditions in the country, is hoping to earn its first NCAA bid since 1998 when the Hakeem Ward-led fourth-seeded Dons stunned Gonzaga in the WCC championship game. Hoping against hope to reclaim USF’s heritage which includes Bill Russell, K. C. Jones and two national championships, the Dons have lost their last three games — two of them in heartbreaking fashion — but aren’t quite ready to unfurl the white flag of surrender.