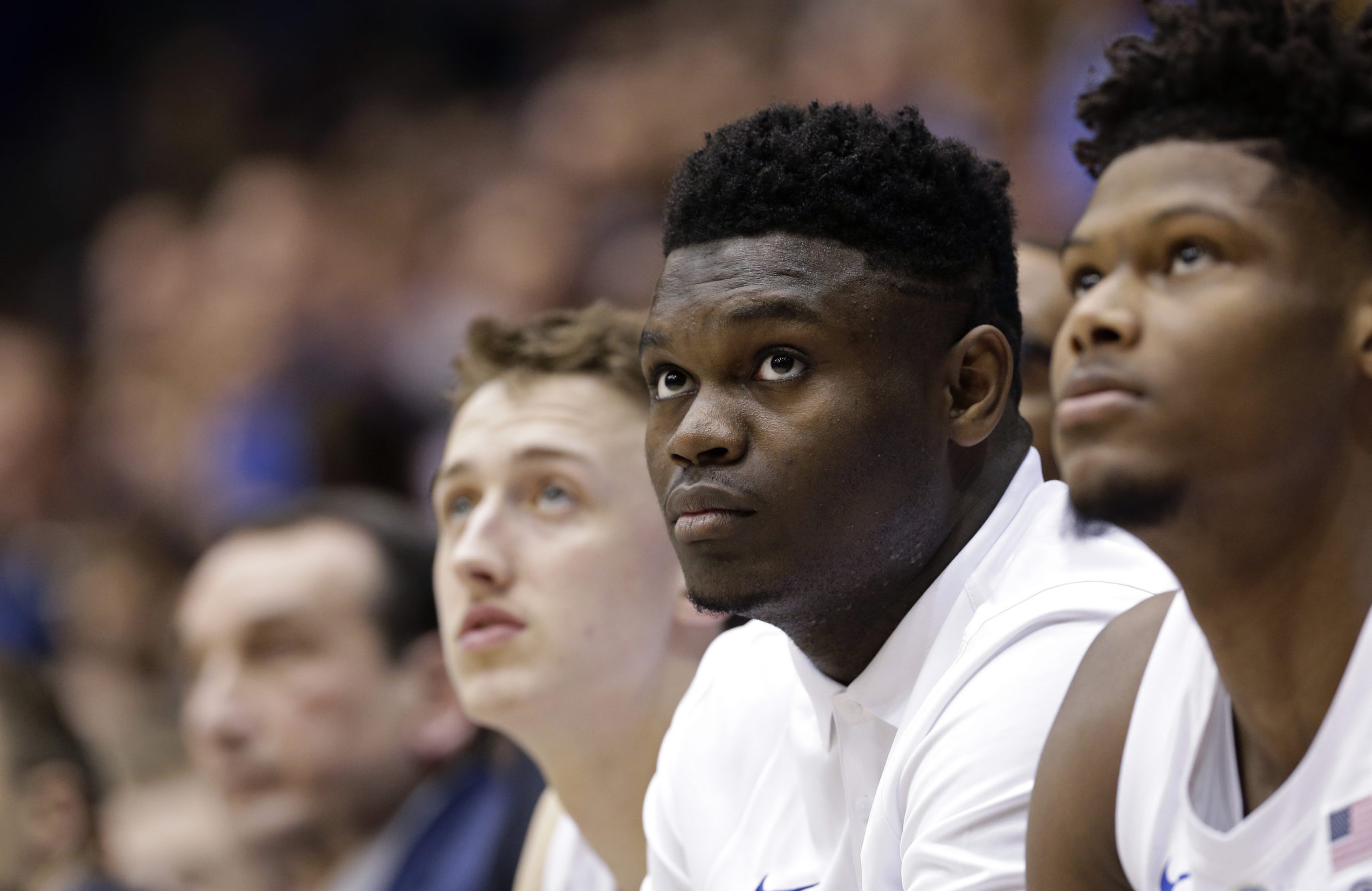 Duke's Zion Williamson, second from right, watches from the bench during the first half of the team's NCAA college basketball game against Wake Forest in Durham, N.C., Tuesday, March 5, 2019. (AP Photo/Gerry Broome)

DURHAM, N.C. — Duke’s Zion Williamson is doubtful to play Saturday against third-ranked North Carolina, though Blue Devils coach Mike Krzyzewski said the 6-foot-7, 285-pound freshman is coming off his “first really good workout” as he continues his recovery from a sprained right knee.

Krzyzewski said Friday that Williamson would have another workout later in the day without contact barring any setbacks following his activity Thursday. And while it sounds like Williamson is on his way to missing a fifth straight game, the Hall of Fame coach expressed optimism that he could be ready for next week’s Atlantic Coast Conference Tournament in Charlotte, North Carolina.

“The way it’s going, he’s not going to be doubtful for the tournament,” Krzyzewski said. Thursday’s workout “was pretty exciting really, to see him move and have confidence in his movements. Now we’ve got to get him into condition and have him do some work” against contact.

Williamson was hurt in the opening minute of last month’s loss to the Tar Heels, complete with the far-reaching bizarre image of his left foot tearing through his shoe as he fell to the court. He has missed four games since.

Williamson is averaging 21.6 points and 8.8 rebounds along with being a walking highlight reel of jaw-dropping athleticism and high-flying dunks. He’s made himself a candidate to be national player of the year and the No. 1 overall NBA draft pick, joining freshman teammate and ACC scoring leader RJ Barrett (23.3 points) to give the Blue Devils an unstoppable 1-2 punch.

“He’s so team-oriented,” Krzyzewski said. “I think it bothers him that he hasn’t been with us. But we can’t let him push the process too much to where his loyalty to his team — and he hasn’t — goes against him coming back the way he should come back.”

“We’re still preparing like Zion’s going to play,” Williams said. “And at the same time, they’re going to make that decision so we have no say over it — so why worry about that part of it?”