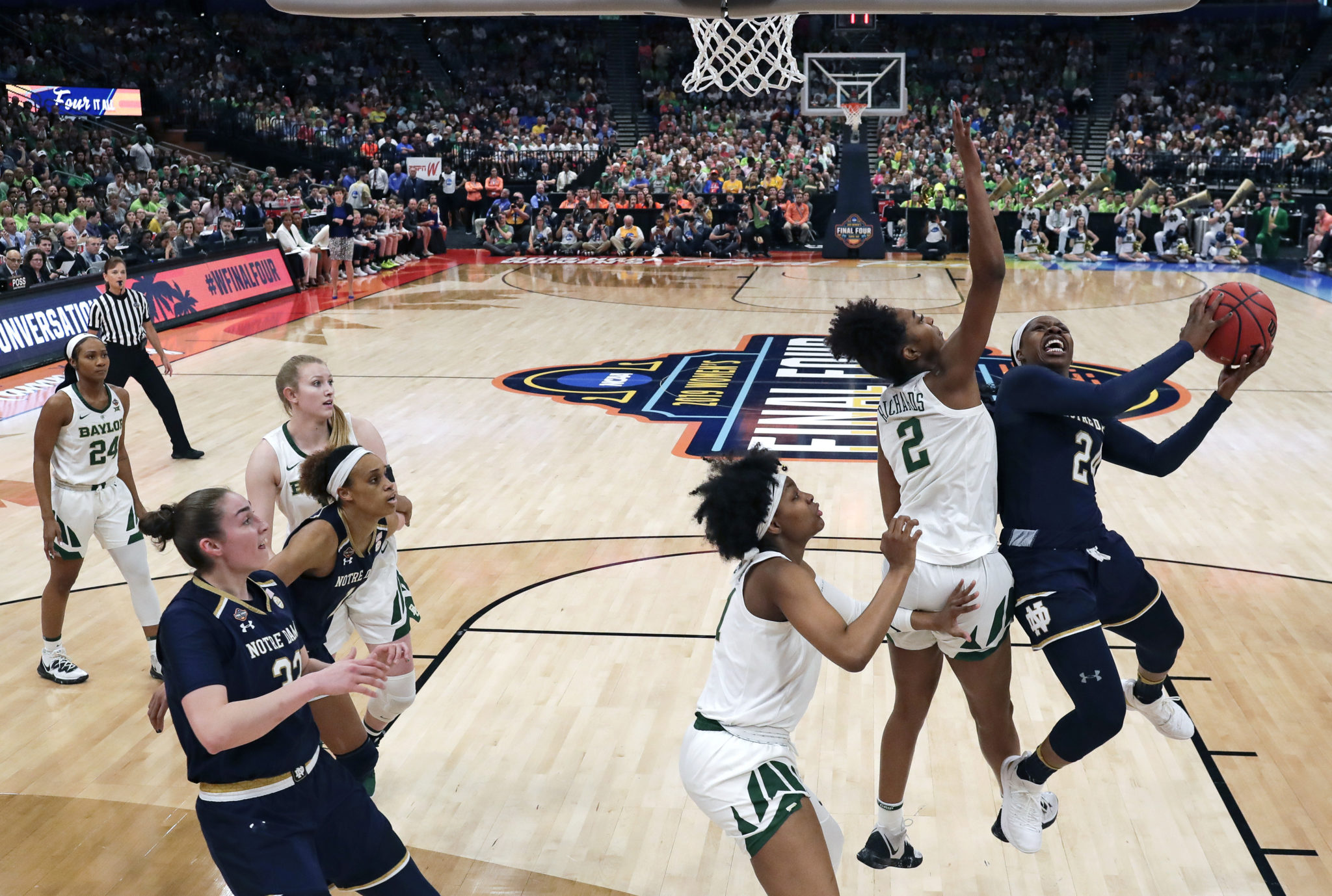 Notre Dame's Arike Ogunbowale, right, goes up for a shot against Baylor's DiDi Richards (2) during the first half of the Final Four championship game of the NCAA women's college basketball tournament Sunday, April 7, 2019, in Tampa, Fla. (AP Photo/John Raoux)

The Fighting Irish star, a year removed from hitting the winning jumper for a national title, went to the foul line for two shots with 1.9 seconds left and an opportunity to tie this year’s championship game.

An 80% foul shooter, Ogunbowale rimmed out her first attempt. She made the second, despite trying to miss.

“It’s tough,” the 5-foot-8 senior from Milwaukee said. “You can’t do anything about that.”

Ogunbowale finished with 31 points — second-most in a NCAA final behind Sheryl Swoopes’ 47 for Texas Tech in 1993 — as one of two Notre Dame players who played the entire 40 minutes.

The Fighting Irish overcame a 17-point, first-half deficit to briefly take the lead down the stretch. There was no doubt who they’d turn to after Chloe Jackson made a tiebreaking layup for Baylor with 3.9 seconds left.

“We decided that probably a week ago,” Notre Dame coach Muffet McGraw said. “I mean, there’s no question that’s what was going to happen. Worked on that play in particular. Wasn’t exactly how we thought it would go. She got to the free-throw line.”

The Fighting Irish stressed, though, that Ogunbowale’s miss wasn’t the difference in the game.

McGraw felt a poor first quarter that saw Notre Dame miss 14 of its first 15 shots and fall behind 25-14 was too much to overcome.

Brianna Turner said the Fighting Irish had numerous other opportunities to make plays that might have led to a better result.

“It doesn’t come down to the free throw. … It was much more than that,” Turner said.

“They punched us from the beginning, like almost everyone does. But they kept punching,” guard Marina Mabrey said. “We finally punched back, but it took too long.”

The Fighting Irish were trying to become only the third team to win consecutive women’s national titles.

With the Fighting Irish losing at least four starters — and possibly all five, depending on whether Jackie Young decides to enter the WNBA draft following her junior season — the window for winning a third national championship could be closing.

“Obviously, it’s hard to look at the big picture right now, but I know that us five seniors have done a lot for this program,” Mabrey said. “We did bring a national championship. We should have brought two.”

McGraw conceded it was difficult to watch such an accomplished team fall short of its goal of repeating.

“It’s always tough to lose. I think you’re always looking at that one thing you could have done differently to make the difference in the game,” McGraw said. “Just disappointed about our start. I mean, that was really unfortunate. But knowing what this group has meant to us, it makes it tougher to lose this way.”

The starting five of Ogunbowale, Turner, Mabrey, Young and Jessica Shepard finished the season with 10,230 career points — an NCAA Division I record for both men and women.

Ogunbowale finished with 2,626 career points, 155 during Notre Dame’s six-game run in this year’s tournament. She scored 145 in last year’s run. Those are the fourth- and fifth-most all-time.