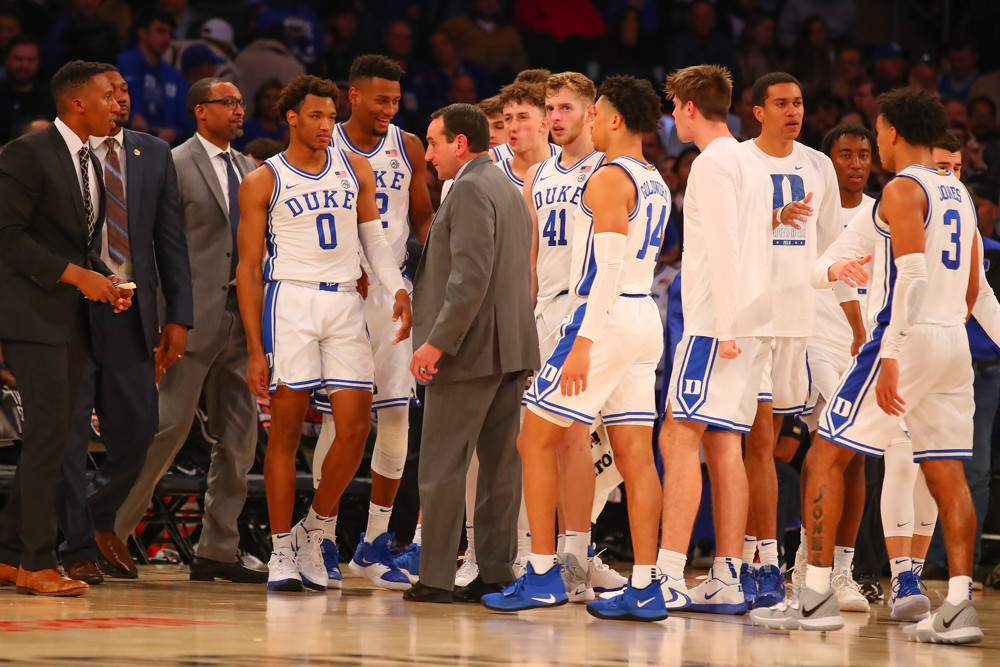 Breaking open a close game with a 20-4 spurt early in the second half, second-ranked Duke (4-0) staved off upset-minded Georgia State 74-63 last night in the opening game of the Empire Classic at Cameron Indoor Stadium in Durham.

It was Duke’s 150th consecutive home victory against a non-conference opponent.

Connecting on 10 of 19 field goal attempts, including four three-pointers, Tre Jones, a 6-2 sophomore guard, led the Blue Devils with 31 points.  Georgia State’s Corey Allen scored a team-high 20 points for the visitors, who fell to 1-2 on the season.

Duke, which led by only two points at halftime, will face the Pac-12’s California Golden Bears at New York’s Madison Square Garden on Thursday.

No. 17 Utah State improved to 4-0 with an 81-54 spanking of North Carolina A&T, undefeated Auburn — the nation’s 22nd-ranked team — won its fourth straight by trouncing winless Cal State Northridge 116-70, and 24th-ranked Baylor (2-1), rebounding from a 3-point loss to Washington a week earlier, used a balanced scoring attack to defeat the Sun Belt’s Texas State 72-63.

Notre Dame returns to the hardwood on Monday evening when it hosts Presbyterian.

Duquesne improved to 3-0 on the young season with a 58-36 victory over Lipscomb, last year’s NIT runner-up.  Lipscomb’s 36 points were the fewest points scored by a Duquesne opponent in thirty-nine years.  The Bison were 0-20 from beyond the arc.  It was also the lowest point total by a Lipscomb quintet since joining the Div. I ranks during the 2004-05 season.

Marcus Weathers, a 6-5 junior from Overland Park, Kansas, scored tallied 13 points, grabbed a dozen boards and came up with six steals for the victorious Dukes.

Duquesne will play in the Junkanoo Jam in the Bahamas next week with games against Indiana State, Air Force and Loyola Marymount.


In late night action, the defensive-minded UCLA Bruins (3-0) under new head coach Mike Cronin, also displayed tremendous defense in winning their third straight game to open the season by throttling UNLV 71-54.  Cronin, the former Cincinnati mentor who guided that program to nine straight NCAA appearances, hopes to do the same thing at UCLA.

In the most one-sided contest of the evening, Northern Arizona (1-1) jumped out to an embarrassing 64-9 halftime lead in massacring outmanned SAU American Indian College 105-32 at the Rolle Activity Center in Flagstaff.  Luke Avdalpvic, a 6-5 redshirt sophomore, led the Lumberjacks with 24 points on 8 of 13 from beyond the arc in eighteen minutes of action.