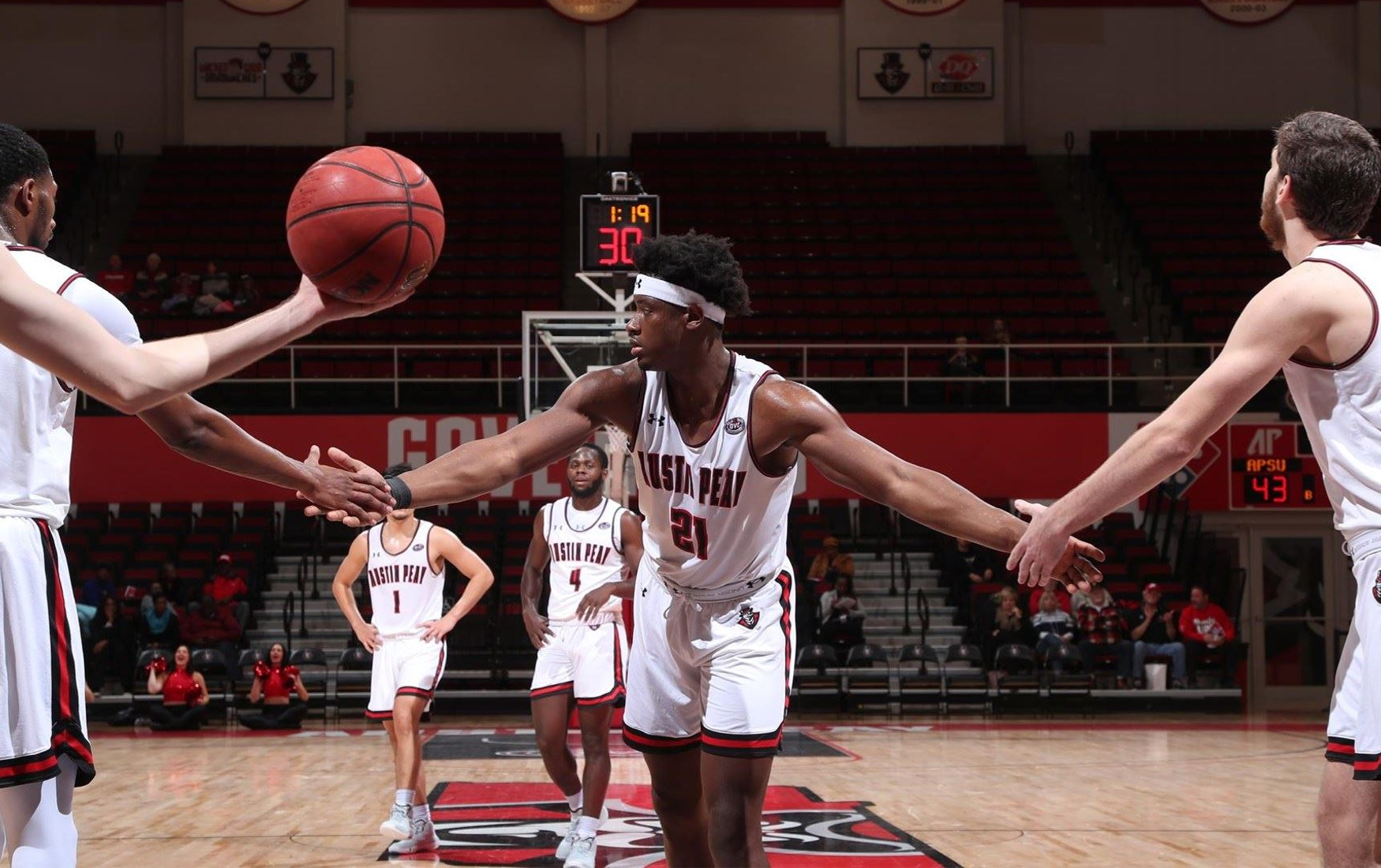 In a tune-up for Saturday’s showdown against No. 7 Kentucky, fifth-ranked Ohio State (10-1), coming off a stunning 84-71 loss to Minnesota on Sunday, routed Southeast Missouri State 80-48 on Tuesday night.  Posting a double-double, Kaleb Wesson led the Buckeyes with 18 points and 10 rebounds.  With the loss — the fourth straight for the slumping Redhawks — SEMO fell to 3-8.

From top to bottom the Atlantic 10 might be the third or fourth strongest conference in the country this year, but it might not have appeared that way last night despite picking up two more out-of-conference wins.

Terrence Hargrove scored a game-high 27 points and Javonte Perkins chipped in 22 for the Billikens.  The Div. II Saints, whose game against Principia was snowed out on Monday, hung around for most of the night and — hoping to play the role of improbable giant slayers — pulled within five points of the heavily-favored Billikens at 72-67 on a pair of free throws by Jalen Gant with 2:37 remaining, before Saint Louis pulled away.

Omer Yurtseven scored a season-high 22 points and grabbed 13 boards in twenty minutes of action as Georgetown (8-3) rolled past Maryland-Baltimore County 81-55 at the Capital One Arena in Washington, D.C.  The seven-foot Yurtseven, a senior from Istanbul, connected on 11 of 14 shots and blocked three shots for the Hoyas, who have won four straight.

Marcus Zegarowski scored 20 points as four players scored in double figures to lift Creighton (9-2) past Oklahoma 83-73 in a Big East/Big 12 Battle in Omaha.  Lon Kruger’s road-weary Sooners, who haven’t played at home in nearly a month, dropped to 7-3.


Rebounding from a 31-point loss at Dayton on Saturday, sophomore Liam Robbins scored a career-high 25 points as Drake improved to 9-3 with a convincing 92-74 victory over Mount Marty at the Knapp Center in Des Moines.  Wright State (9-3) did likewise, trouncing hapless Mississippi Valley State 92-50 at the Ervin J. Nutter Center in Dayton, Ohio.

Princeton (3-8) looked like two different teams on Tuesday as the streaky Tigers went five minutes without scoring at the end of the first half and trailed by a dozen points at the intermission, but came out clicking on all cylinders in the final twenty minutes to defeat Iona 90-86 in overtime in the opening game of the inaugural Air Force Reserve Basketball Hall of Fame Invitational — a one-day tripleheader at the Barclays Center in Brooklyn.

Sophomore Drew Friberg scored 22 points for Princeton.  Iona’s Asante Gist tallied a game-high 23 points and Tajuan Agee and E.J. Crawford added 21 points apiece for the Gaels, who dropped to 2-4.  The 6-9 Agee also pulled down six rebounds and dished off five assists for Iona.

Six-foot-five sophomore Keyontae Johnson, who thrived in last year’s SEC tournament, scored 19 points and snagged 10 rebounds as Florida (7-3) easily defeated Providence 83-51 in the Hall of Fame’s second game.  The Friars, who were paced by 6-7 senior Alpha Diallo’s 20 points and 12 rebounds, dropped to 6-6 on the season.

Chris Lykes, who scored 17 points, hit a pair of clutch free throws as the Miami Hurricanes (7-3) narrowly defeated Temple 78-77 in the Hall of Fame’s nightcap.  The Owls, who missed a desperation three-pointer at the buzzer, fell to 7-3.

JaQuan Lyle scored 21 points and Carlton Bragg added 20 while pulling down 14 rebounds as New Mexico (11-2) pulled away from Grand Canyon University 91-71 in Albuquerque.  The Antelopes, who won twenty games last year while finishing third in the WAC, have lost four of their past five games while dropping to 4-9 on the season.

Despite a monster game by Stetson’s Rob Perry, a 6-3 freshman guard from Orlando who scored a game-high 29 points — five shy of tying his career record — and grabbed eight rebounds, UNC-Asheville (6-4) edged the Hatters (5-8) in a 78-76 thriller at the Kimmel Arena in Asheville.  It was Stetson’s third straight setback and the fourth in its last five games.  Tajion Jones scored 21 points for the victorious Bulldogs.

Winthrop (5-7) jumped out to an 11-0 lead in routing SIU-Edwardsville 93-73 on Tuesday afternoon.  The Eagles, who drained fifteen 3-pointers in the contest, were led by 6-9 forward D.J. Burns, who scored a team-high 19 points.  Chandler Vaudrin and 6-8 senior Josh Ferguson, one of the Big South’s leading frontcourt players who can hit from the outside, buried four treys apiece for Winthrop, which snapped a four-game losing streak.

Cam Williams and Zeke Moore tallied 15 points apiece for the Cougars (2-9), who lost for the seventh straight time.

Kent State (9-2) outscored North Carolina A&T 17-3 in overtime to defeat the Aggies 85-71 and claim its ninth win of the season in the consolation game of the Don Haskins Sun Bowl Invitational in El Paso, Texas.  UTEP (8-1) won the championship game, defeating UC Irvine 67-61.


Markus Howard scored a game-high 26 points as Marquette (8-2) rolled past Grambling 93-72 in Milwaukee.  The diminutive sharp-shooting Howard, who is tied with UT-San Antonio’s Jhivvan Jackson as the nation’s leading scorers at 25.2 points per game, drained 6 of 10 shots from beyond the arc as the Golden Eagles prevailed for the sixth time in their last seven games.

Javan White scored 14 points and pulled down 11 rebounds as UMKC (6-7) handed Toledo (8-3) its third loss of the season, defeating the Rockets 72-57 in Kansas City.

Clutch free-throw shooting by Josh Williams helped Robert Morris (4-8) upset Central Michigan 83-79 in Moon Township, Pa., on Tuesday night.  Williams, a 6-2 senior guard who scored 24 points, made four shots from the charity stripe in the final four seconds to preserve the victory for the Colonials.

The Chippewas, who were paced by David DiLeo’s team-high 23 points, fell to 7-5 with the loss — their third straight setback.

In other Tuesday night action, sophomore Jayden Gardner posted his fifth double-double of the season by scoring 22 points and grabbing 13 rebounds and freshman Brandon Suggs, recording his first career double-double, scored 10 points and grabbed 10 boards as East Carolina (4-7) cruised past Maryland-Eastern Shore 71-57.  Cedric Henderson, Jr., scored 15 points as Campbell improved to 7-3 with a 60-46 win over Elon (4-8), and Saint Francis, Pa., (6-4) won its fourth consecutive game with a 115-66 drubbing of Franciscan University.

Tyreek Scott-Grayson scored a career-high 20 points as UAB (6-4) bounced North Alabama 63-56 in Birmingham and Austin Peay’s Terry Taylor exploded for a season-high 39 points as the Governors, who forced a staggering 26 turnovers, routed McKendree 80-61 in Clarksville, Tennessee.


Austin Peay (5-5) and UAB will both play undefeated Duquesne in the St. Pete Shootout in St. Petersburg, Florida, this weekend.

In late night action out west, ubiquitous Jonah Radebaugh — the Big Sky’s Defensive Player of the Year the past two seasons — scored a season-high 26 points, dished off a half-dozen assists, grabbed five rebounds and came up with four steals as Northern Colorado (6-4) pummeled Denver 86-64, Eastern Washington (7-3) annihilated Neb.-Omaha 97-56, and Air Force improved to 6-6 with a 99-42 romp over Div. III Johnson & Wales of Colorado.  All fifteen Falcons scored in the blowout.

Daejon Davis and Oscar da Silva scored 18 points apiece as Stanford (10-1), which scored only 18 points in the first twenty minutes, rallied from an 11-point second half deficit to defeat San Francisco 64-56 at the Maples Pavilion in Stanford.  The Dons (9-3), who were averaging 84.6 points per game entering last night’s contest, were held to a season-low 56 points — eleven fewer than their previous low of 67 in a four-point loss to Arizona State on Dec. 3.