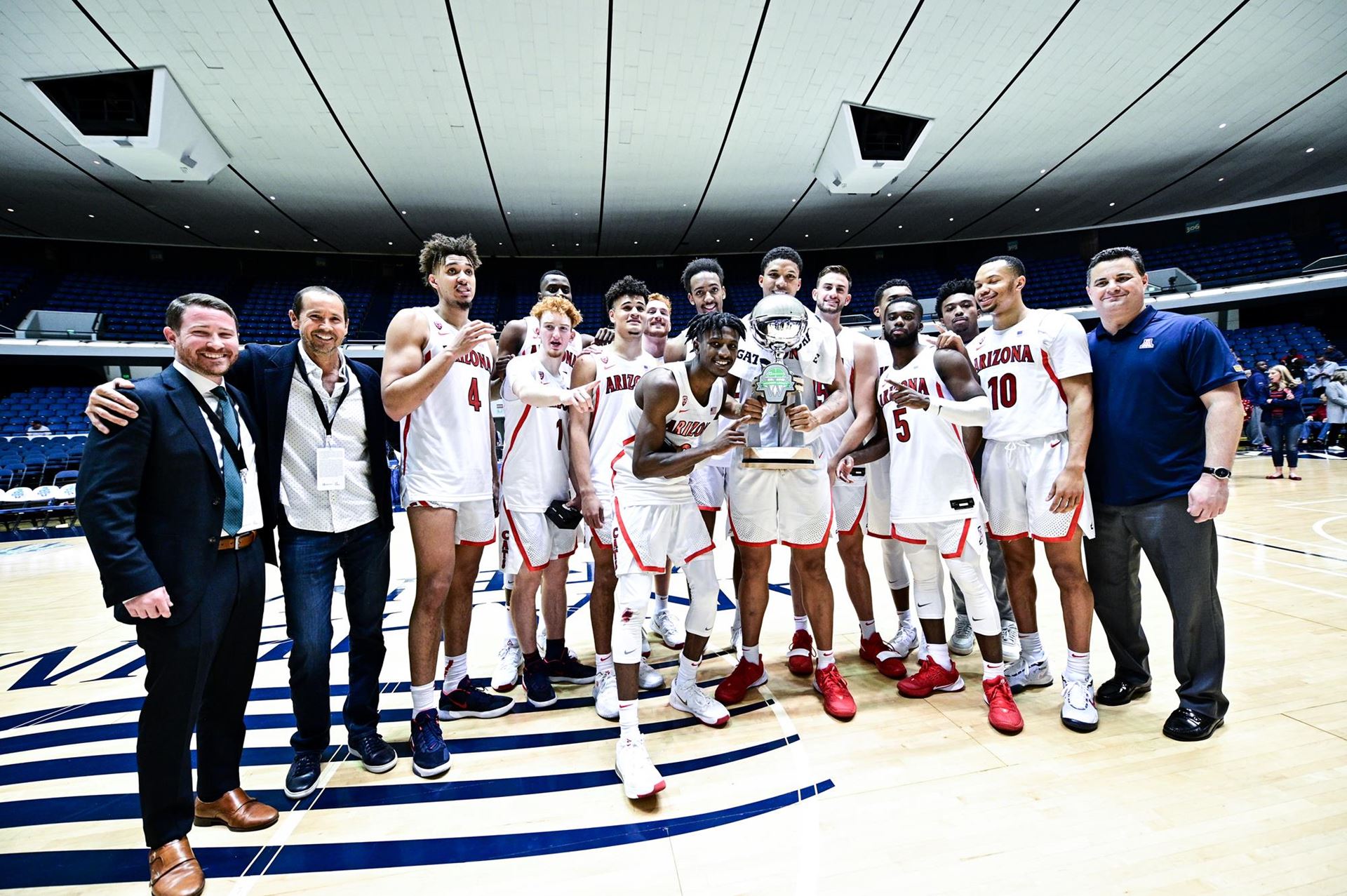 Senior guard Dylan Smith scored a game-high 20 points as fourteenth-ranked Arizona (9-0) defeated Wake Forest 73-66 to capture the Wooden Legacy championship at the Anaheim Convention Center on Sunday night.  It was Arizona’s first early season tournament title since defeating San Diego State 61-59 in the championship game of the Maui Invitational in 2014.

The young Wildcats return to action on Saturday with their first true road game of the season against once-beaten Baylor (5-1) in Waco, Texas.

Jordan Dingle, a 6-3 freshman from Valley Stream, N.Y., scored 19 of his 21 points in the second half as the Penn Quakers (5-3), who threw a mild scare into undefeated Arizona on Friday, outlasted Long Beach State 95-79 to win the tournament’s third-place game.  Chance Hunter tallied a game-high 24 points for Long Beach State, which dropped to 3-6 on the season.


An energetic Derek Culver came off the bench to score 25 points and grabbed eleven rebounds as unranked West Virginia (7-0) remained undefeated with an 86-81 win over Rhode Island (5-3) on Sunday afternoon in Morgantown.  Rhode Island’s Fatts Russell scored a season-high 32 points for the visiting Rams, who stormed back from an eleven-point halftime deficit to tie the game at 60-60 with just under ten minutes to play.

No. 5 Maryland (8-0) also remained unbeaten after downing cold-shooting Marquette 84-63 in the championship game of the Orlando Invitational in Lake Buena Vista, Florida.

The Terps completely shut down Marquette’s Markus Howard, the reigning Big East Player of the Year who had scored 40 and 51 points, respectively, in the first two rounds of the eight-team tournament.  Howard, who was a woeful 1-12 from the floor while missing all half-dozen of his attempts from beyond the arc, was limited to a season-low six points in the loss.

Onyeka Okongwu, a 6-9 freshman who tallied a brisk 53 points in the three-game tourney, scored 27 points and grabbed 14 boards as USC (7-2) defeated Harvard 77-62 in the tournament’s third-place game.  The Crimson, who were limited to nineteen points in the second half, fell to 5-4.

Nate Pierre-Louis and Quinton Rose combined for 29 points as Temple (6-1) downed Davidson 66-53 in another consolation matchup earlier on Sunday.  Davidson, which led 33-30 at the half, dropped to 3-5.


In other games, No. 22 Villanova (5-2) defeated LaSalle 83-72 in a Big Five rivalry on Sunday.  Justin Moore scored a game-high 25 points for the Wildcats, who were coming off an 87-78 lost to Baylor in their last outing.  Ed Crosswell, a 6-8, 250-pound sophomore from Philadelphia, posted a double-double — scoring 14 points and hauling down 14 rebounds — for the Explorers, who dropped to 4-3 on the season.

Rebounding from a disappointing trip to Maui, UCLA improved to 6-3 with an easy 93-64 lambasting of San Jose State (3-5) on Sunday at the Pauley Pavilion in Los Angeles.  Jalen Hill and freshman Jaime Jaquez, Jr., each scored 18 points for the Bruins, who shot 52 percent from the floor.

Tanner Krebs scored 18 points as Saint Mary’s (8-1), which knocked off previously undefeated Utah State on Friday night, defeated visiting Nebraska-Omaha 75-66 for its seventh straight victory.  Omaha (5-4), which led the Gaels 39-35 at half, was paced by J. T. Gibson’s sixteen points.

Malcolm Porter, a 6-4 junior guard, scored fifteen points as host Portland (6-1) defeated Incarnate Word 65-56.  Coming off a 7-25 season a year ago in which the Pilots finished winless in the West Coast Conference at 0-16, Portland has now won five straight since losing by eleven at Southern Cal on Nov. 8th.  Incarnate Word fell to 2-6.

Osun Osunniyi scored 15 points, grabbed 10 rebounds and blocked a half-dozen shots as St. Bonaventure (3-4) advanced to the finals of the Boca Raton Beach Classic on the campus of Florida Atlantic University with a 70-61 victory over San Diego (3-6).

The Bonnies will play Florida Atlantic (4-3) in Monday’s championship game.  FAU won a thriller on Sunday, narrowly beating Illinois-Chicago 71-70 when 6-11 sophomore center Karlis Silins made one of two free-throw attempts with a second remaining.  A minute earlier, the Owls had tied the game on a three-pointer by 6-7 senior Jailyn Ingram.