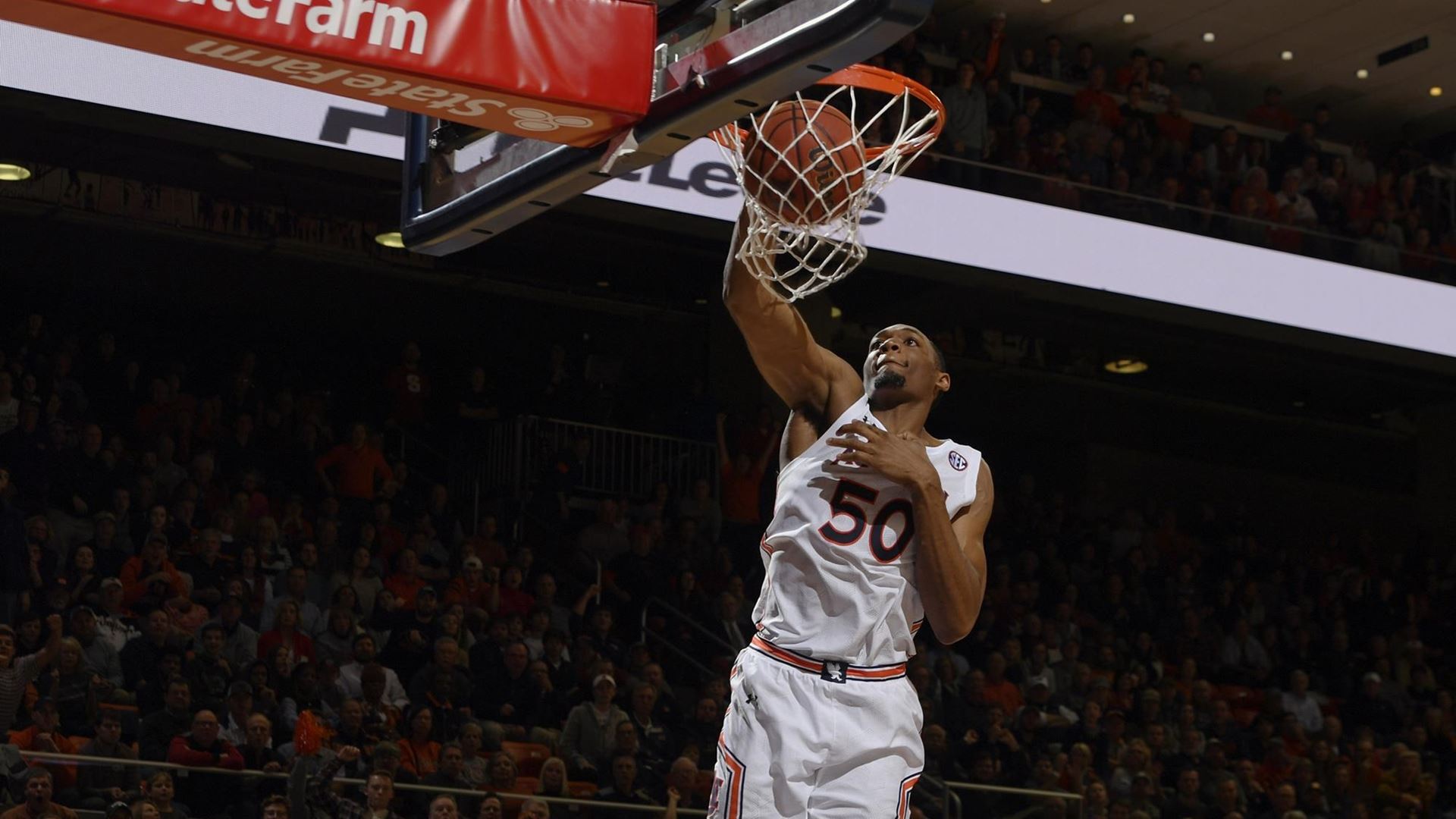 Senior Samir Doughty scored eleven of his game-high 24 points in the waning minutes as No. 12 Auburn (10-0) remained undefeated with a hard-fought 79-73 victory over North Carolina State (8-3) late Thursday night before a crowd of 9,121 at Auburn Arena.

Doughty, a pugnacious competitor who nailed 42.5 percent of his shots from beyond the arc last year, hit a critical 3-pointer with 25 seconds left to virtually put the game out of reach.

In a game that saw no fewer than twelve lead changes and was tied on nine occasions, the Wolfpack, who were whistled for 28 fouls in the contest, briefly surged ahead 64-62 on a layup by Braxton Beverly with 5:23 remaining, but went ice cold for the next four minutes and two seconds before Markell Johnson hit a short jumper inside the paint to trim Auburn’s lead to six at 72-66.


C.J. Bryce led NC State with 21 points, including making 3 of 4 from beyond the arc.  Markell Johnson added 17 for the Wolfpack.  Bryce, a 6-5 senior, also had a game-high eleven rebounds.

Bryce and Johnson were both charged with technical fouls in the emotionally-charged loss.

In notching its tenth consecutive victory, Auburn remained one of four unbeaten teams in the country, joining Duquesne, Liberty and San Diego State in that elite yet ever-dwindling group.

On the flip side, Florida A&M (0-9) remained one of only two Div. I teams without a victory as the Rattlers, putting up a spirited fight, fell at Washington State 87-73.  C.J. Elleby scored a game-high 25 points and grabbed eleven rebounds — his first double-double of the season — for the victorious Cougars, who improved to 7-4.

FAMU, which trailed by 17 at the intermission, pulled within eleven points with 3:19 remaining in the game, but couldn’t get any closer.  M.J. Randolph scored 21 points for the Rattlers in the losing effort.


Portland (8-4), which has already exceeded its total wins during the 2018-19 season, had its two-game winning streak snapped in a 73-63 loss at home to Jackson State (3-8).  Tristan Jarrett scored a game-high 31 points for the Tigers, who snapped their own eight-game losing streak.

Cameron Oluyitan scored a career-high 27 points, as Southern Utah (7-4) prevailed 84-63 at slumping Long Beach State (3-9), which lost for the fifth time in a row.  Oluyitan, a 6-7 redshirt senior from Sugarland, Texas, made 6 of 8 shots from beyond the arc for the Thunderbirds, who have won three straight and four of their last five.

In other late night action, Taze Moore sank a pair of clutch free throws to lift Cal State Bakersfield (5-8) past Montana State 74-72, Portland State improved to 6-6 on the year with a 76-66 win over Loyola Marymount (5-7) at the Gersten Pavilion in Los Angeles, and sophomore guard Cameron Shelton scored 15 points as Northern Arizona (6-2) eked out a 63-56 road win over UC Riverside (7-5).