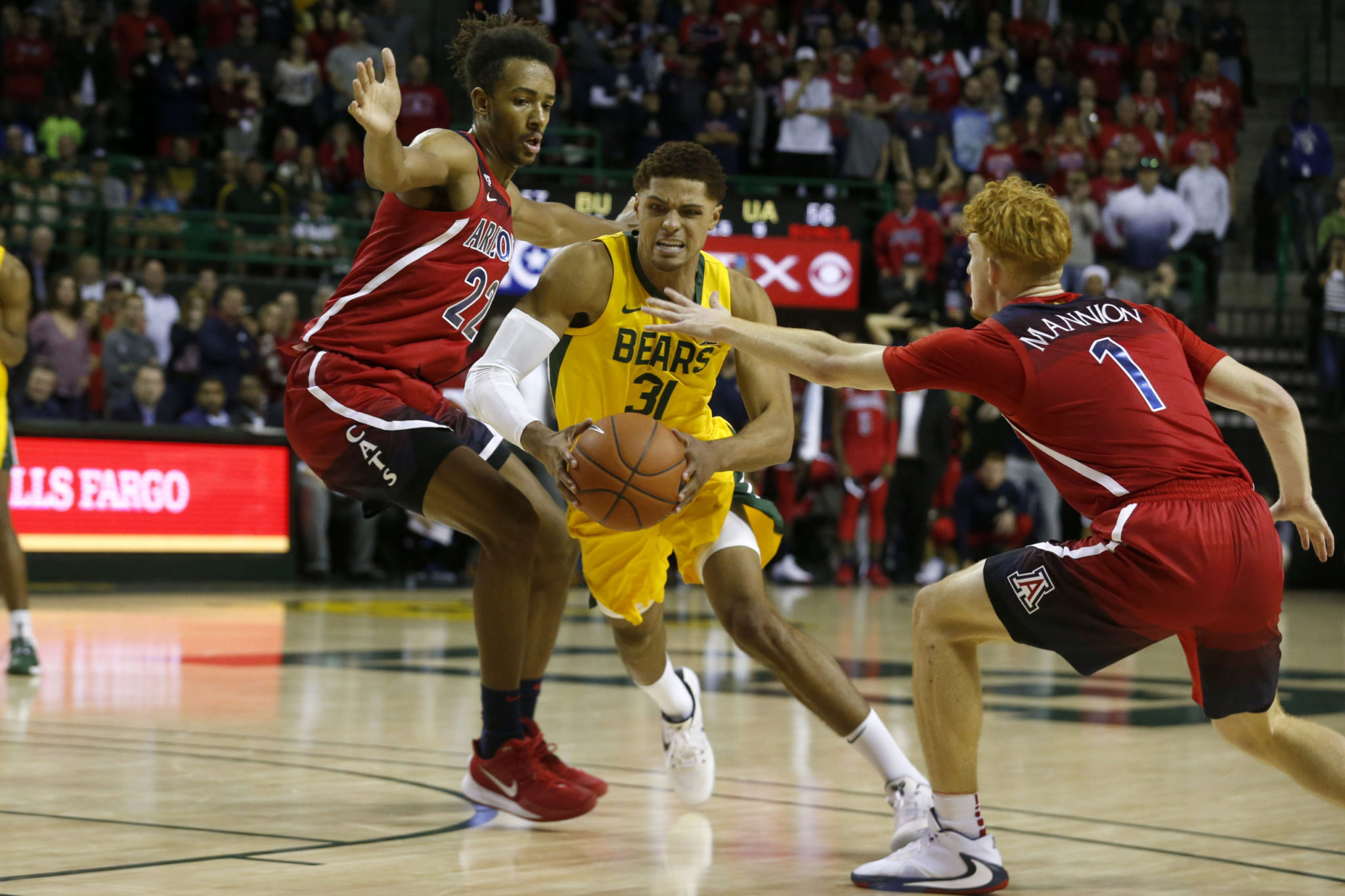 Baylor’s MaCio Teague scored a game-high 19 points as the eighteenth-ranked Bears (7-1), jumping out to an eleven-point halftime advantage, defeated No. 12 Arizona 63-58 in Waco yesterday.  It was the first loss of the season for Arizona, which dropped to 9-1.

Arizona was one of seven previously undefeated teams that saw their perfect records blemished on Saturday.

With a chance to win or tie in the closing seconds, WVU’s Miles McBride’s potential game-tying jumper careened off the left side of the rim as the buzzer sounded.

The Red Storm improved to 8-2 on the season while the Mountaineers, tasting defeat for the first time this year, fell to 7-1.

Indiana (8-1) also lost for the first time this season as the Hoosiers fell on the road to hot-shooting Wisconsin 84-64.  Sophomore guard Kobe King scored a career-high 24 points for the Badgers, who improved to 5-4 overall and 1-0 in the Big Ten.


Second-ranked Kansas handed Colorado (7-1) its first setback of 2019-20 with a convincing 72-58 win in Lawrence.  Ochai Agbaji scored 20 points and Devon Dotson, who could have been a second round NBA pick but opted to stay in school, chipped in 18 for the highly-ranked Jayhawks (7-1).

Arkansas (8-1) also lost for the first time this season, losing at Western Kentucky 86-79 in overtime.  Taveion Hollingsworth tallied a game-high 23 points for the Hilltoppers, who improved to 7-3.  The Razorbacks made only 2 of 7 shots in overtime.

Georgetown (6-3), which knocked off previously unbeaten Oklahoma State on Wednesday, played the role of giant slayer for the second straight time in crushing SMU 91-74 at the Moody Coliseum in Dallas.  Jahvon Blair, a 6-4 junior guard from Ontario, matched his career-high with 21 points for the Hoyas.

Suffering its first loss of the season, SMU fell to 8-1.

Delaware (9-1), which had quietly reeled off nine consecutive victories to open the season — a program record — also saw its perfect record tarnished in a 66-56 loss to George Washington (5-5) at the Charles E. Smith Center in the nation’s capital.

Armel Potter, a 6-1 senior guard, tossed in nineteen points and 6-8 forward Arnaldo Toro added a dozen points while pulling down a game-high 17 rebounds for the Colonials.  Collin Goss, a GWU transfer, paced the Blue Hens with 15 points.

Were it not for senior point guard Anthony Cowan Jr.’s last-second heroics, an eighth undefeated team might also have gone down to defeat for the first time yesterday, but Cowan’s game-tying trey and steal and ensuing foul shot in the final 21 seconds lifted Maryland (10-0) past Illinois 59-58.

Cowan’s game-ending dramatics capped an 11-1 run in the final four minutes and eleven seconds by the undefeated Terps.

With the seven losses yesterday, the number of undefeated teams in the country dwindled to nine.