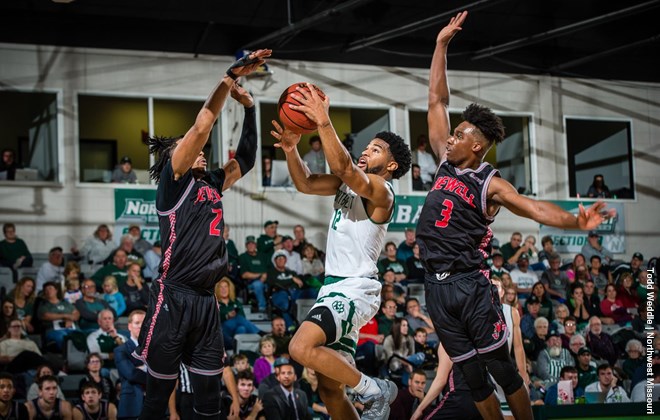 Central Missouri (4-5), which had dropped five of its first eight games, was clearly a huge underdog when it hosted top-ranked Northwest Missouri State this afternoon in Warrensburg, Mo., but the Mules surprised everyone by pulling off a stunning 72-60 win over the heavily-favored Bearcats.  UCM’s unexpected victory snapped defending Division II national champion Northwest Missouri’s 46-game winning streak.

It was Northwest Missouri’s first loss since a 60-50 setback to Minnesota State in the first round of the Div. II NCAA Tournament on March 10, 2018.

While limiting Northwest Missouri State to 36.5 percent from the floor, Central Missouri shot a brisk 53.7 percent, connecting on 23 of 49 field goal attempts.  The Mules, coming off a 67-63 home loss to Missouri Western on Thursday, shot a blistering 56 percent from the field in the second half, including burying 7 of 14 from beyond the arc.

It was Central Missouri’s first win against the Bearcats since March of 2015.  Northwest Missouri had won the last nine meetings between the two schools.

Both teams are now tied at 1-1 in the Mid-American Athletics Association (MIAA), a game behind Missouri Southern, Northeastern State, Rogers State and Emporia State.

Coach Ben McCollum’s young Bearcats, who posted a perfect 38-0 mark last year, will look to start a new winning streak when they host Central Methodist (3-8) in Maryville on Dec. 16th in the first of five straight home games.