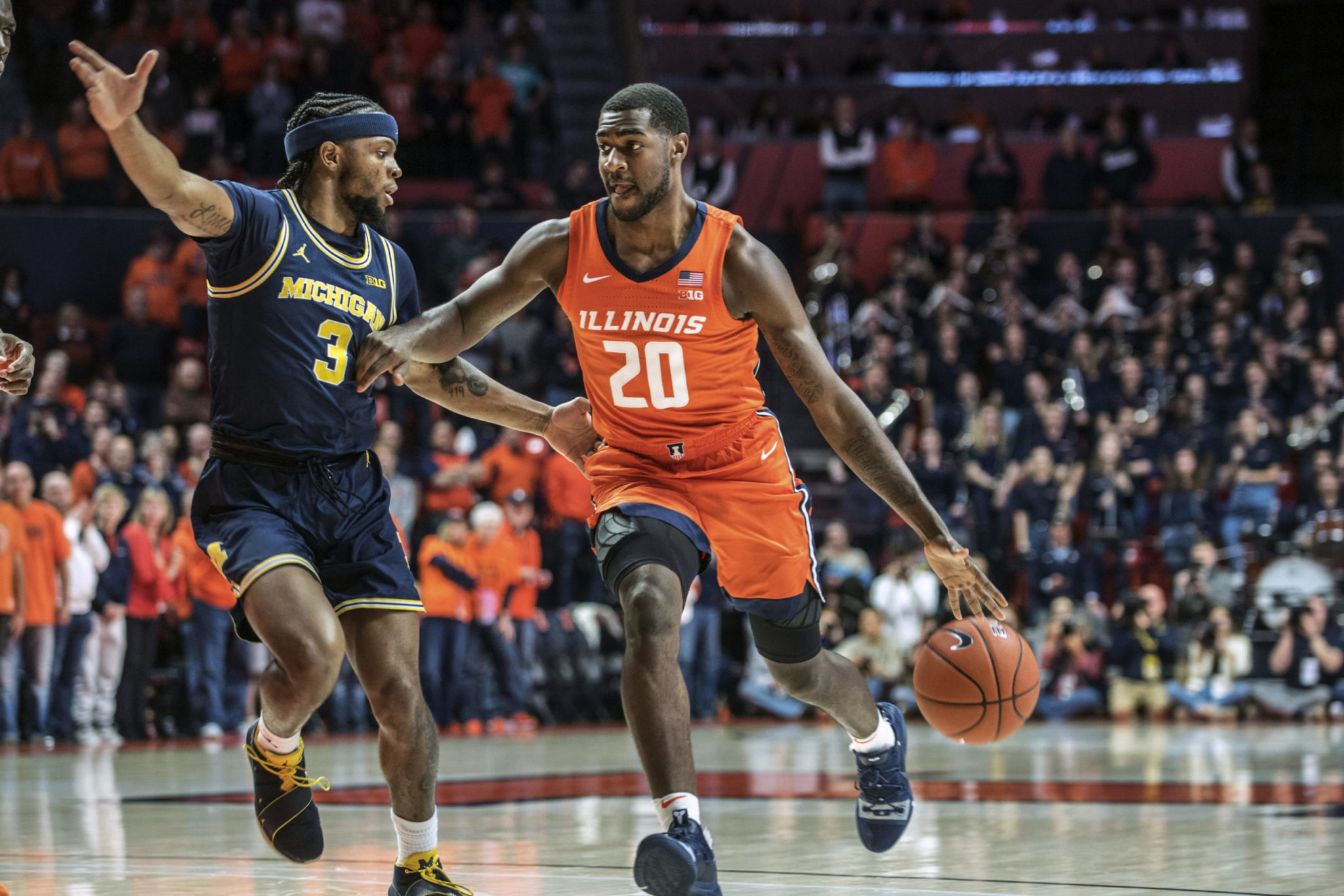 The Fighting Illini’s Kofi Cockburn, a 7-foot freshman from Jamaica, scored 19 points, grabbed 10 rebounds, blocked four shots and inadvertently knocked out a referee as Illinois (7-3) stunned fifth-ranked Michigan 71-62 before a crowd of 13,277 at the State Farm Center in Champaign, Ill., on Wednesday night.

Cockburn had accidentally hit referee Lewis Garrison when celebrating a basket with about four minutes remaining in the game.  The official’s condition wasn’t immediately known, although he did leave the court on his own power.  He was later taken to a local hospital as a precautionary measure.

It was the second loss in three games for Juwan Howard’s Wolverines, who dropped to 8-2.


Rebounding nicely from a 63-58 loss to Baylor this past weekend, fifteenth-ranked Arizona State (10-1) was clicking on all cylinders in easily dispensing of visiting Omaha 99-49 last night at the McKale Center in Tucson.  Josh Green and Chase Jeter scored 15 points apiece for the Wildcats, who host sixth-ranked Gonzaga on Saturday.

In a game featuring teams headed in opposite directions, Azar Swain scored 24 points as surging Yale (9-3) won its sixth straight game by beating UMass 83-80 in overtime at the Mullins Center in Amherst.  Swain, a 6-foot junior guard scored 20 of his 24 points in the second half as the Bulldogs rallied from a 45-40 halftime deficit.

It was the fourth overtime contest for Yale this season.  The most recent had been a 100-89 triple-overtime victory over Siena on Nov. 20.

Junior Carl Pierre, a four-year starter who is deadly from the outside, tallied a game-high 25 points, including a career-best eight 3-pointers for the Minutemen (5-6), who have lost six in a row after opening the season at 5-0.

Wisconsin is still looking for its first road win of the season and may have to wait a while before that happens as its next two road games are at No. 19 Tennessee on Dec. 28 and at third-ranked Ohio State on Jan. 3.


Sophomore Mike Bothwell scored a career-high 25 points, including making 6 of 8 from beyond the arc, as Furman (9-3) rolled past Div. II North Greenville 90-65.  Bothwell entered Wednesday night’s contest against the visiting Crusaders averaging 9.2 points per game.

North Greenville, which was limited to 39.1 percent from the floor, dropped to 4-5 on the season.

Highly-recruited 6-5 sophomore guard Nate Hinton, an AAC all-rookie selection a year ago, scored a career-high 25 points and hauled down 10 rebounds as host Houston (6-2) won its fourth straight by defeating UT-Arlington 71-63.  Brian Warren scored a season-high 27 points for the Mavericks, who fell to 4-7.

Reserve freshman guard Isaiah Hill scored 14 points as Tulsa improved to 8-2 on the season with a 69-56 win over Boise State (5-4) at the Donald Reynolds Center in Tulsa.  The Golden Hurricane play once-beaten Arkansas in Fayetteville on Saturday.

Xavier Sneed scored a season-high 20 points as Kansas State (6-3) enjoyed an 86-41 laugher over visiting Alabama State (1-8) in Manhattan, Kansas, on Wednesday night.  Cartier Diarra, KSU’s most experienced guard, dished off a career-high 10 assists for the Wildcats, who led 52-16 at the break.

Winthrop, which hung tough against Duke and knocked off then-18th ranked Saint Mary’s earlier in the year, was led by 6-8 senior Josh Ferguson, one of the Big South’s top frontcourt players who can also hit from long range, and Hunter Hale, who scored 14 and 11 points, respectively.