Liberty’s unbeaten streak on the line Sunday at LSU 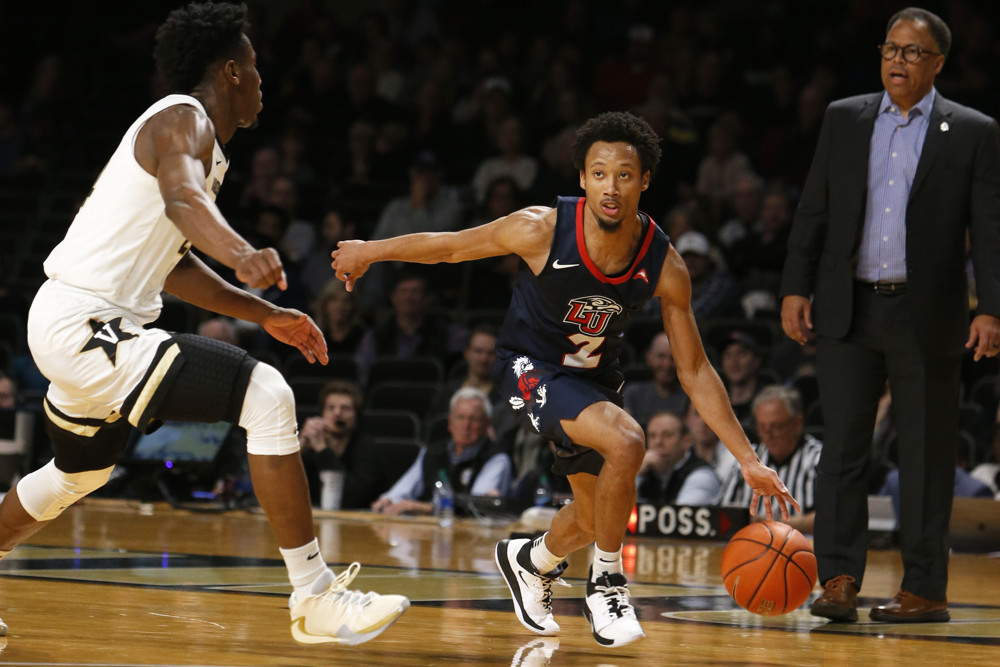 Off to the best start in program history, Liberty University (14-0) puts its season opening fourteen-game winning streak on the line Sunday afternoon when the Flames visit LSU in Baton Rouge in their non-conference finale.

In a way, Liberty’s early success is a double-edged sword, bringing tons of exposure to the A-Sun preseason favorite — a team that won a program-record 29 games last year and came within a game of reaching the Sweet 16 — yet simultaneously placing a huge target on its back.


As one of only three unbeaten teams in the country, there was no way to avoid such national media scrutiny.

“It’s next to impossible in this day and age of social media, we’ve got no chance of blocking it out,” said seventh-year head coach Ritchie McKay, who decided to embrace the national media attention.  “I think it’s great for our University to get some of the shine or the spotlight on Liberty because it’s such a special place.”

Led by senior guard Caleb Homesley and forwards Scottie James and Myo Baxter-Bell, unranked Liberty unselfishly shares the ball as well as any team in the country with six players averaging between 9 and 11.3 points per game.

Defensively, Liberty has been even more impressive, holding opponents to a mere 51.6 points per game — second best in the nation behind only defending national champion Virginia, which allows just 46.5 points per game.

Although the Flames have already defeated Vanderbilt, upsetting the Commodores 61-56 in Nashville two weeks ago, winning on the road against an SEC opponent is never easy.

That’s especially true in the case of LSU (7-4), a hungry team coming off a Sweet 16 appearance in last year’s NCAA Tournament and still looking for its first signature win of the 2019-20 campaign.


The Tigers, who are 6-2 at home with losses to Utah State (80-78) and East Tennessee State (74-63), are coming off a heartbreaking 70-68 setback to USC at the Staples Center in Los Angeles on Dec. 21.  Were it not for the fact that LSU experienced its poorest shooting night of season, connecting on just 36.8 percent of its shots from the field while making a mere 3 of 18 from beyond the arc, the Tigers probably would have come away with a victory over the Trojans.

The effort was certainly there, but the shots simply wouldn’t fall.

Moreover, third-year LSU head coach Will Wade, whose job looked in serious jeopardy when he was briefly suspended last March following an FBI investigation into college basketball corruption, is more than a little familiar with Liberty and its brand of basketball.  The 36-year-old Wade twice coached the Atlantic 10’s Virginia Commonwealth to wins over Liberty, easily defeating the Flames 85-57 in 2015 and narrowly squeaking out a 64-59 victory two years later.

Coming off back-to-back wins over Towson and Akron in the D.C. Holiday Hoops Fest last weekend while winning its second early season tournament, Liberty has won all three of its true road games this season.  In addition to the aforementioned 5-point win against Vandy in mid-December, the Flames also defeated East Carolina a month earlier by twenty points in Greenville, N.C., and downed Grand Canyon University in Phoenix 70-61 on Dec. 8th.

Auburn and San Diego State — the nation’s other two remaining undefeated squads — are also in action this weekend.  Both are heavily favored.

Like Liberty University, Lipscomb is a member of the Atlantic Sun Conference.  Coming off an 86-63 loss at Vermont last Friday, the badly-depleted Bisons, who lost four starters from a team that played for the NIT championship while finishing 29-8 in 2018-19, have won only two of seven road games this season and will be huge underdogs against Auburn on Sunday.

The same is true for Cal Poly, which competes in the Big West Conference.  Only a year removed from finishing 6-23 while looking destined to have a similar season this year, the Mustangs will be no match for San Diego State.