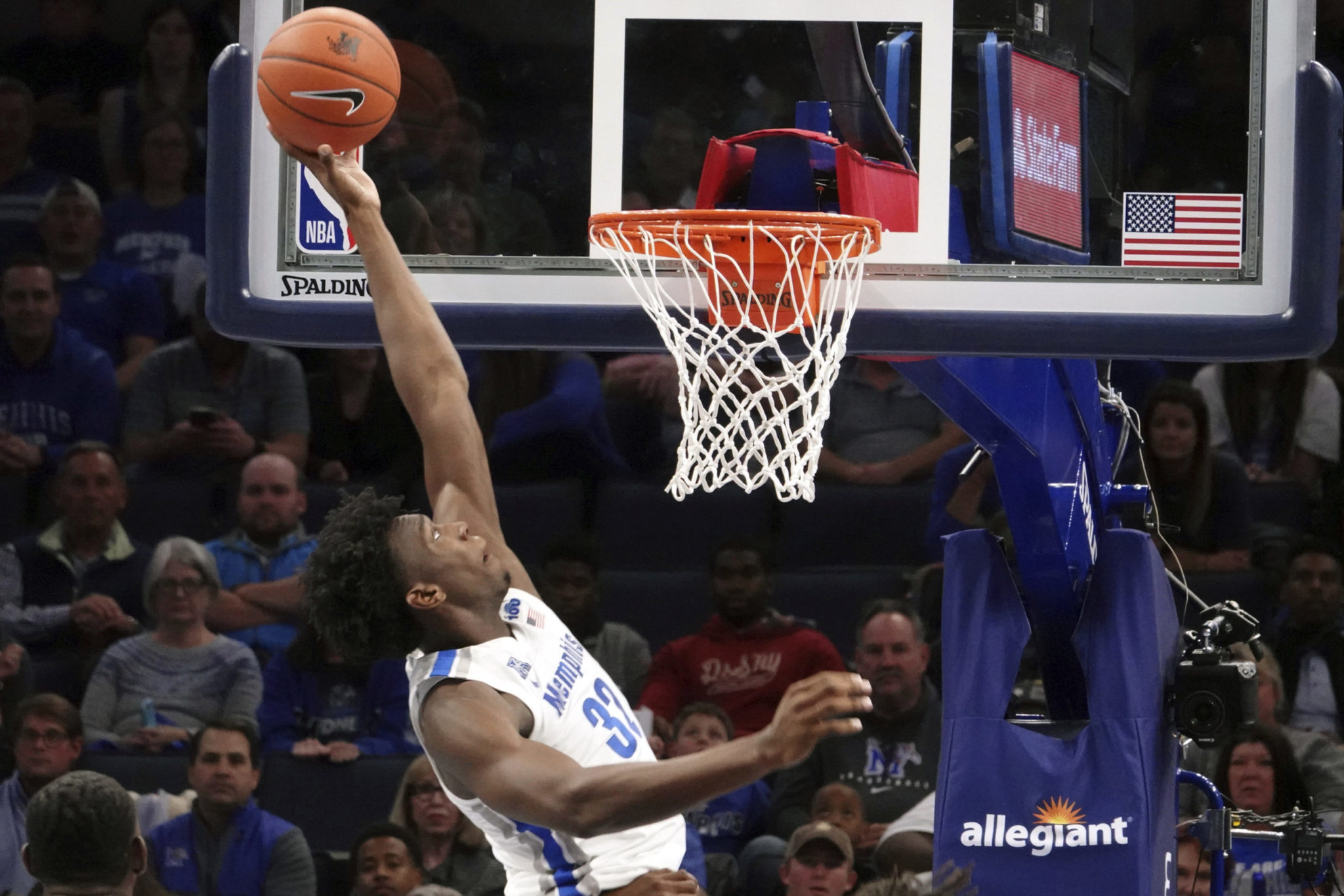 None-and-done will work just fine (we rounded down from the three actual games he played at Memphis).

After tussling with those tyrants at the NCAA, Wiseman told the guardians of an unjust system what they could do with their mandatory season of college basketball.

He’s not going to take this charade any longer.


In what should have been a surprise to no one, Wiseman announced that he’s withdrawn from classes he was forced to take at Memphis to spend the next few months building up his 7-foot-1, 240-pound body, honing his enormous potential in some empty gym, and waiting to hear his name called in late June.

He’ll be one of the first players picked in the 2020 NBA draft.

Maybe even No. 1, despite the lack of a significant college resume.

“I will be preparing for the next chapter of my life,” Wiseman wrote in an Instagram post Thursday. “Ever since I was a little kid, it’s been a dream of mine to play in the NBA.”

That dream should have come true this year, but the NBA’s silly requirement that forces a player to wait at least a year after high school to be eligible for the draft forced his hand — just as it’s forced so many other worthy players to give a year’s worth of free labor to some de facto pro sports franchise masquerading as a university.

Wiseman tried to play by the rules.

He signed with Memphis as the top prize in one of the nation’s best recruiting classes. He made it onto the court for those aforementioned three games, aided by a temporary restraining order, and provided a tantalizing glimpse of his enormous potential by averaging 19.7 points and 10.7 rebounds.

But the NCAA ruled he wasn’t eligible because his family received $11,500 from former NBA star Penny Hardaway to assist in a move from Nashville to Memphis a couple of years ago.


While Hardaway wasn’t the Tigers’ coach at the time, he is now, which indeed makes the whole transaction smell more than a little fishy.

The NCAA, which is always a stickler for doing the right thing as long as it doesn’t mean actually providing fair compensation to those who generate billions in revenue, ruled that Hardaway was a booster at the time because he had given his alma mater $1 million nearly a decade earlier to build a sports hall of fame.

Most ludicrously, the NCAA ordered the 18-year-old Wiseman to somehow pay back the $11,500 his family got with a donation to his favorite charity, apparently forgetting all the time and effort it spends to prevent players from being paid for their services.

Now, we’ll never know if Wiseman planned to take a job at McDonald’s to pay off his supposedly ill-gotten gain, depriving us all of the tantalizing possibility that a baby-faced, 7-foot-1 teenager might someday ask us if we wanted to supersize our order.

After seeing what happened to Zion Williamson, no one can blame Wiseman for taking this step.

Exactly 10 months ago, while serving his one-and-done sentence at Duke, Williamson tumbled to the court less than a minute into a huge game against rival North Carolina. The Nike sneaker on his left foot had somehow blown apart at the seams, leaving the 6-6, 284-pound phemon clutching his knee.

Williamson returned to the court for the Blue Devils in March, went on to the be No. 1 pick in the NBA draft and inked a reported $75 million deal with Nike (all is forgiven in love and sneakers).

But he banged up his left knee again during a Summer League game, and his career with the New Orleans Pelicans is now on hold while he recovers from surgery on his right knee.


Williamson has yet to play a real NBA game.

With that undoubtedly on his mind, Wiseman decided there was no reason to play another college game, even though he was eligible to rejoin the 11th-ranked Tigers on Jan. 12.

“This was not how I expected my freshman season to be, but I’m thankful for everyone who has supported my family and me throughout this process,” Wiseman wrote. “I feel blessed for the opportunity to be a Tiger and for having the honor to play with these special group of guys. I can’t wait to see what all they accomplish this season.”

The Tigers (9-1) appear to be doing just fine without him.

Meanwhile, NBA Commissioner Adam Silver has made it clear that one-and-done is on its last legs.

“We’re ready to make that change,” he said after an owners’ meeting a few months ago. “We should be taking a serious look at lowering our age to 18.”

The college game doesn’t seem to want the rule anymore, either — other than perhaps Kentucky coach John Calipari, who has turned his program into a one-and-down machine that keeps regenerating itself with the nation’s top high school prospects.

Silver has indicated that such a change won’t occur before the 2021 draft, and there’s always a chance it could take longer since the current collective bargaining agreement runs at least through the 2022-23 season.


Given Wiseman’s predicament and other top prospects who have been forced to play internationally for a year because they didn’t want to go the college route, not to mention the fact that nearly every NBA team now has a minor-league franchise in the developmental G League circuit, let’s speed up the timetable.

One and done should be all done.