Top-ranked Stanford gets defensive, pulls away from Tennessee 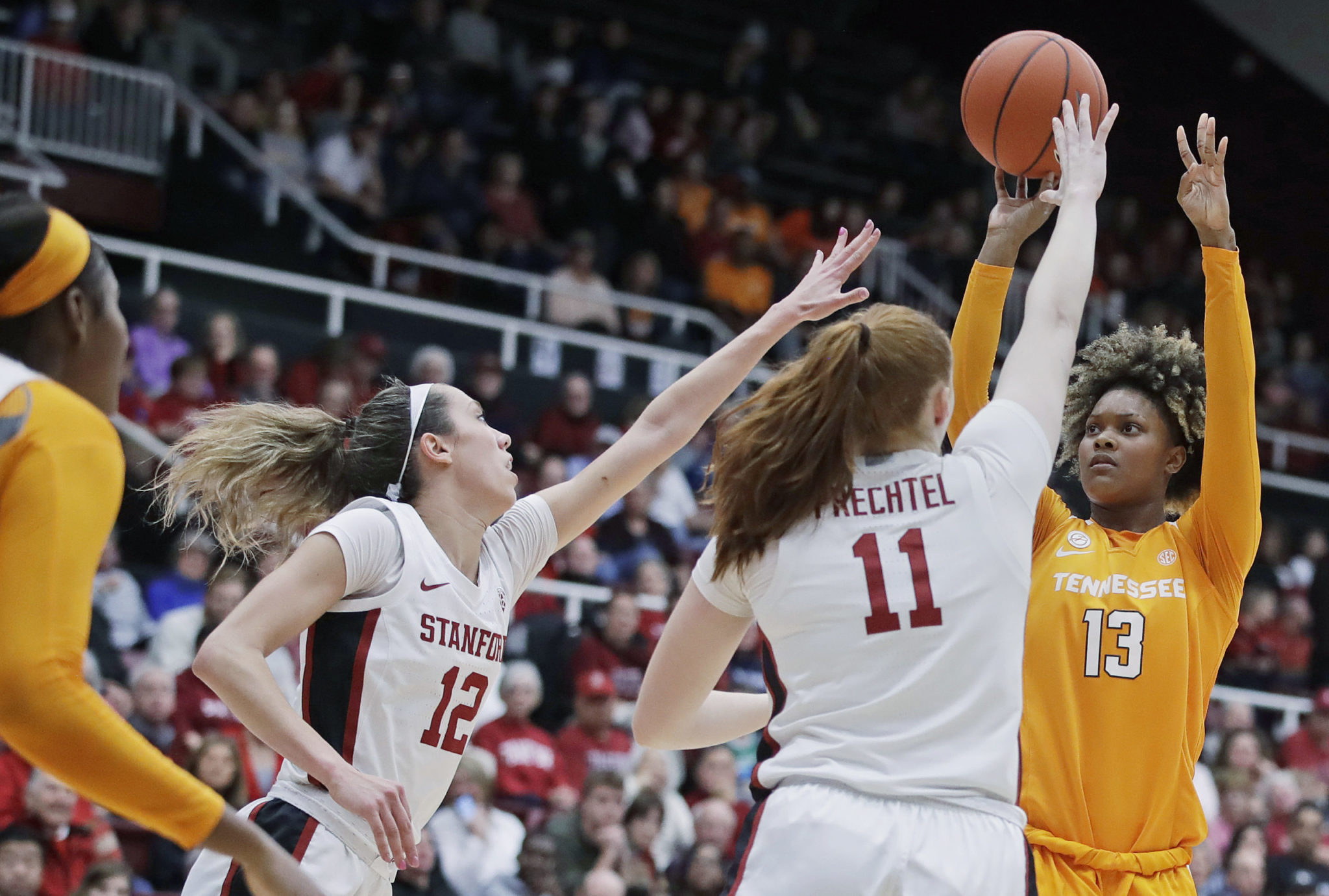 Lexie Hull added 11 points and nine rebounds to help the Cardinal move within a victory of the program’s best start since openig 11-0 in 2012-13. Freshman Francesca Belibi came off the bench to contribute seven points and three blocked shots before fouling out.

Rennia Davis scored 14 points to lead Tennessee (8-2),but shot just 5 for 20 and no other Lady Vols reached double figures.


Hall of Fame Stanford coach Tara VanDerveer’s team, one of four Pac-12 programs ranked in the Top 10, played in-your-face, swarming defense to stymie the Lady Vols in the latest edition of a storied series that began in 1988 at Knoxville, Tennessee. That’s where the Cardinal captured the first of their two national championships in 1990.

Belibi made things tough on Tennessee in the paint on both ends, driving for short jumpers and layups and plugging the middle on defense by getting her hands up to contest and alter shots.

Davis scored eight of Tennessee’s initial 12 points with a pair of early 3-pointers but picked up her second foul at the 4:49 mark of the first quarter. Davis sat down and Stanford responded with a 10-0 run to finish the quarter to lead 20-12.

Tennessee missed its final 10 shots of the opening period then another four in the second before Jordan Horston’s layup at the 7:17 mark.

Horston added nine points for the Lady Vols under first-year coach Kellie Harper, who had never coached against the top-ranked team. Harper picked up a technical late in the third as Stanford continued to pull away.

Tennessee couldn’t overcome shooting 25.6% in the first half and 28% overall.


The Cardinal have won six of the last nine meetings but are 12-25 overall against the Lady Vols — and nine of Stanford’s 12 victories in the series have been at home. Tennessee won 83-71 at Stanford in its last visit to Maples Pavilion on Dec. 21, 2017, to snap the Cardinal’s five-game home winning streak in the rivalry.

Guard Lacie Hull returned for Stanford after sitting out Sunday’s 71-52 win over Ohio State with a foot injury.

Tennessee: The Lady Vols are 14-34 facing the No. 1 team, 6-7 on the road. … Tennessee was leading the country in defensive rebounds per game at 35.8 and ranked second in field-goal percentage defense at at 28.5%. … Harper coached against VanDerveer for the third time and has never won. Harper is 1-5 for her career vs. top-five opponents. … Tennessee hasn’t beaten a No. 1 team since topping LSU 67-65 on March 6, 2005. … The Lady Vols dropped their first road game (2-1).

Stanford: The Cardinal got 32 points from their bench. … Stanford overcame 13 turnovers, seven in the first half. … The Cardinal faced Tennessee as the top-ranked team for the fourth time, also in 1992, ’96 and 2012. … The Cardinal are 6-0 at home. … Stanford came in ranked 11th in the country for scoring offense at 82.3 points per game.

Tennessee: At Portland State on Saturday before a four-day holiday break. The team is scheduled to reconvene practice Dec. 26 ahead of the the final non-conference game Dec. 29 at home vs. Howard.

Stanford: At Texas on Sunday in second-to-last non-conference game before beginning Pac-12 Conference play at home Jan. 3 against Washington State.