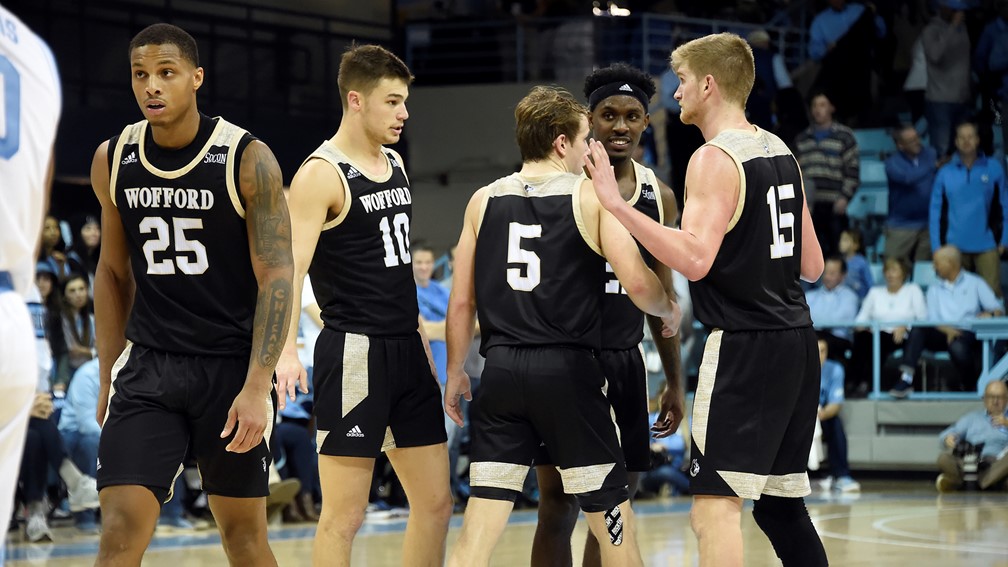 While Minnesota’s stunning 84-71 upset of Ohio State was certainly the headline story in college hoops yesterday — the unexpected loss by the Buckeyes reduced the remaining number of undefeated Div. I squads to a scant four (Auburn, Duquesne, Liberty and San Diego State) — there was plenty of other action taking place around the country on Sunday.

Playing without injured starters Cole Anthony and Leaky Black, it was UNC’s third consecutive loss as the once highly-touted Tar Heels dropped to a relatively dismal 6-4.

Sunday’s upset was the second time in three years that Terriers, who used a 16-0 second half surge to overtake the Tar Heels, have won in Chapel Hill.  Wofford beat the then fifth-ranked Tar Heels 79-75 on the road in December of 2017.


Senior Markell Johnson’s desperation heave from beyond half-court lifted North Carolina State (8-2) past UNC Greensboro 80-77 at the Greensboro Coliseum on Sunday in one of the wildest finishes in college basketball thus far in the 2019-20 season.  Johnson’s game-winning shot came only 2.1 seconds after UNC Greensboro’s Isaiah Miller had tied the game at 77-77 with a bank shot over Johnson.

Miller finished with a game-high 26 points in the heartbreaking loss while Johnson led the Wolfpack with 19 points.

As unlikely as it sounds, it was the second time this season that the Spartans (8-3) had lost on a last-second shot from beyond half-court.  Last month, Montana State’s Harald Frey launched a shot from beyond mid-court to defeat UNC Greensboro 67-66 at the buzzer in the Spartan Invitational.

Aside from its two heartbreaking buzzer-beaters, UNC Greensboro’s only other loss this season came at the hands of second-ranked Kansas — a hard-fought 74-62 setback in Lawrence in early November.

Six-foot-ten sophomore Yor Anei scored 18 points as Oklahoma State snapped a two-game losing streak and improved to 8-2 with an impressive 61-55 road win over Houston on Sunday.  Anei, who tied a program record for blocks with 65 last year, scored a critical layup in the final minute and drained a pair of clutch free throws to secure the victory for the Cowboys.


Oklahoma State scored the final fourteen points of the first half to take a 35-19 lead into the locker room before the Cougars, who had won four straight, chipped away at the lead and eventually tied the game at 50-50 with 3:40 remaining.

Sophomore Cam Mack posted his first career triple-double as Nebraska (5-6) evened its Big Ten record at 1-1 with a 70-56 win over Purdue (6-4) at the Pinnacle Bank Arena in Lincoln.  Mack scored 11 points, pulled down 10 rebounds and had a dozen assists for the Cornhuskers, who have fourteen newcomers on their roster this season.

Atlantic 10 preseason favorite Virginia Commonwealth (8-2) extended its home winning streak to eight games with a 61-51 win over Missouri State (6-6) in Richmond.  VCU, which has advanced to the NCAA Tournament eight times in the previous nine years, was led by senior Mike’L Simms, who scored eleven points.

Onyeka Okongwu scored 24 of his 28 points in the second half as USC (9-2) got past Long Beach State 87-76 at the Galen Center in Los Angeles on Sunday.  The 6-9 freshman, who led Chino Hills High School to two state championships, also grabbed a dozen rebounds for the Trojans.  Ethan Anderson, a 6-1 freshman guard, had a career-high twelve assists for USC, which has won three straight.

Chance Hunter, a 6-6 sophomore from Inglewood who had three steals in the game, scored eighteen points for Long Beach (3-8), which has lost four in a row while dropping its seventh straight game to USC in Los Angeles.


Forcing more than twenty turnovers for the fourth time this season, scrappy Washington State (6-4) blew past UC-Riverside 70-56 in Pullman, Washington.  Hitting 7 of 11 shots from the floor, C.J. Elleby scored a game-high 20 points for the Cougars, who have won three straight.  Angus McWilliams tallied a team-high 13 points for turnover-plagued UC-Riverside, which fell to 7-4.

It was Loyola’s fourth straight victory.

Devante Carter, a 6-3 junior guard from Newport News, scored a dozen points and had eight rebounds and four assists for Norfolk State (3-9).  The Spartans, last year’s MEAC regular season champions, have lost eight in a row after opening the season at 3-1.

Darrell Brown scored 17 points and dished off seven assists as Bradley (8-3) blasted Georgia Southern 81-51 in Peoria on Sunday.  Elijah McCadden had 12 points for Georgia Southern, which fell to 6-4.

Aamir Simms, a 6-6 junior who fouled out with two minutes remaining, scored a game-high 21 points for the host Tigers, who dropped to 5-5.

Landers Nolley scored 18 points as Virginia Tech (8-3) rolled past Gardner-Webb 73-46 at the Cassell Coliseum in Blacksburg.  It was the 31st consecutive nonconference victory for the Hokies on their home court.


Point guard Jaheam Cornwall, a 6-foot junior from Brooklyn, scored a team-high 14 points for the Runnin’ Bulldogs, who were held to a season-low 29.1 percent shooting from the floor.  It was the third straight setback for Gardner-Webb, which advanced to the NCAA Tournament last season for the first time in program history.

UCF (8-2) won for the fifth straight time by defeating visiting Sacred Heart 76-65 in Orlando.  The Knights, who host Bethune-Cookman on Wednesday before traveling to Norman, Okla., on Saturday to take on the Oklahoma Sooners, were paced by four players in double figures.

Boston College (7-5) had little trouble with winless Central Connecticut State (0-10), cruising past the Blue Devils 74-55 at the Silvio O. Conte Forum in Chestnut Hill on Sunday.

Senior guard Jared Hamilton, who was 3-of-3 from beyond the arc, scored a game-high 18 points for the Eagles, who have won three straight, including a 73-72 thriller over Notre Dame in South Bend on Dec. 7th.  BC’s Steffon Mitchell added 13 points and grabbed 12 rebounds for his second straight double-double.  Mitchell, a 6-8 junior, scored 15 points and had 13 rebounds in a 21-point victory over Albany on Tuesday.

One of only three remaining Division I teams without a win this season, CCSU was paced by Greg Outlaw’s 18 points.

Junior Daeqwon Plowden scored a game-high 23 points, tying his career best, as host Bowling Green (8-2) defeated Cleveland State 72-58.  The 6-6 Plowden made 11 of 13 shots from the field.

Bowling Green, which last season came within 8 minutes and sixteen seconds of earning its first trip to the NCAA Tournament since 1968, has won three in a row and seven of its last eight games while Cleveland State dropped to 4-7.

Led by Channel Banks’ 19-point effort, Akron (8-2) had five players in double figures as the Zips routed Div. II Concord 100-50 on Sunday.  It was the fourth consecutive win for Akron, which takes on Tulane this Friday.

Senior guard Tyler Sharpe scored a career-high 30 points as Northern Kentucky improved to 8-3 with a 79-64 victory over Illinois State (4-6) in Highland Heights, Ky.  The Norse, who have won three straight, visit UNC-Greensboro — another 8-3 squad — on Saturday.


Reserve Tray Boyd III scored 20 points as East Tennessee State (9-2) barely broke a sweat in demolishing Milligan, an NAIA member, 97-41 in Johnson City on Sunday.  It was the fiftieth meeting between the two schools.

Senior guard Eddie Stansberry scored 23 points as Hawaii (7-3) pounded Samford 94-73 in Honolulu on Sunday evening.  Josh Sharkey had 21 points and a half-dozen steals for the visiting Bulldogs, who fell to 6-6 on the season.

Nathan Knight scored 15 points and hauled down 11 rebounds as William & Mary (8-3) won for the eighth time this season in a 90-30 laugher over Division III Goucher.  The Tribe blocked ten shots against the undersized and outclassed Gophers, who fell to 1-7.  It was Goucher’s second game against a Div. I opponent this season, having lost an earlier bout to VMI 98-32 in late November.