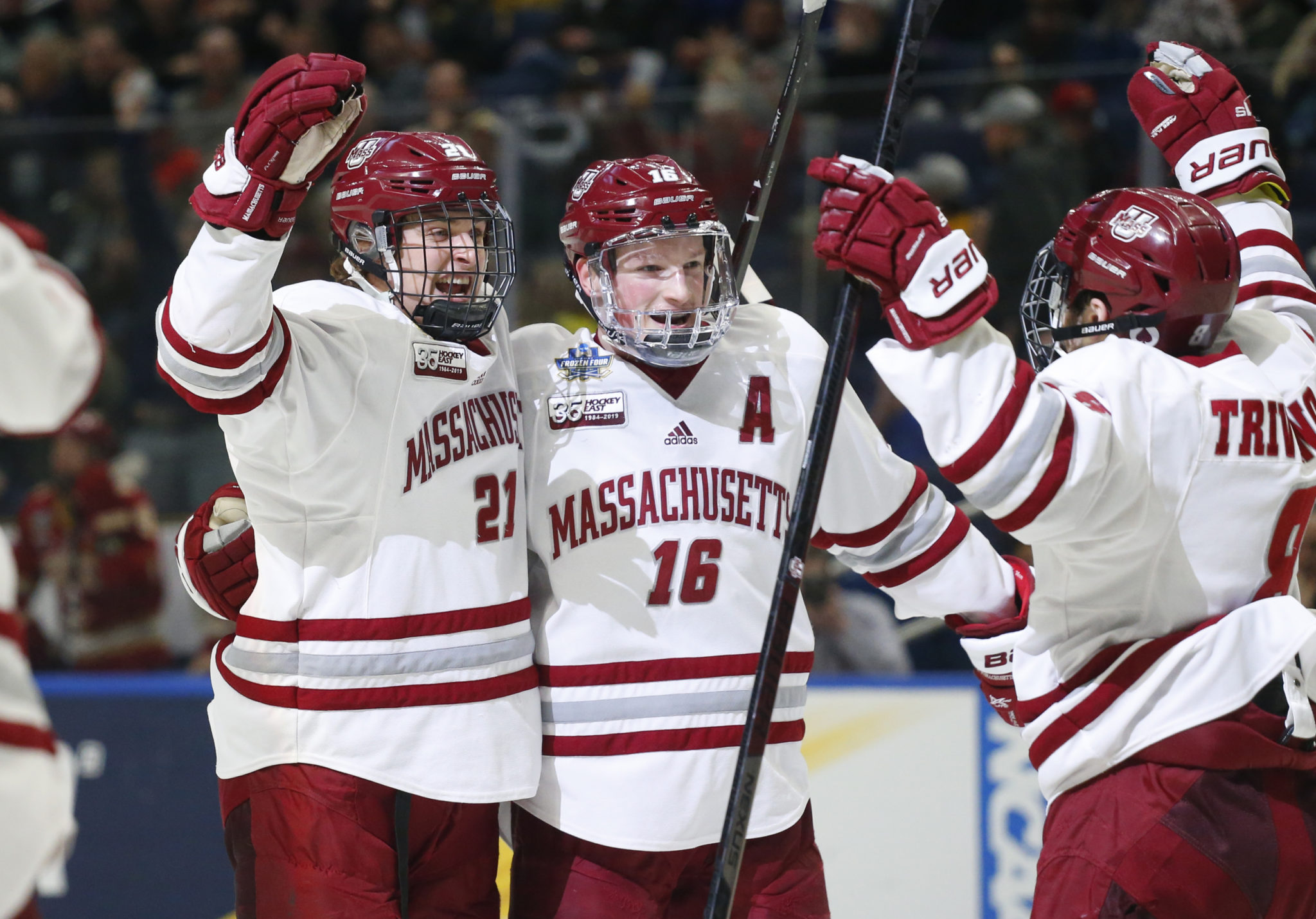 There was no other way the freshman defenseman could put into perspective the role he played in helping Massachusetts advance to college hockey’s Frozen Four championship game for the first time in school history.

“It’s probably the coolest moment of my life,” Del Gaizo said. “Right now it seems like I’m dreaming, but we’re off to the national championship and that’s all that matters.”

Del Gaizo scored 15:18 into overtime to seal a 4-3 victory over Denver in a semifinal game that ended just after midnight Friday.

The Minutemen (31-9), making just their second NCAA Tournament appearance, rebounded after squandering a 3-1, third-period lead and overcame having two forwards — including captain Niko Hildenbrand — ejected for illegal hits to the head.

The victory continued turning around a Hockey East program that hadn’t previously won more than 21 games and was two years removed from a 5-29-2 finish in its first year under coach Greg Carvel.

“That five-win season is still pretty fresh,” Carvel said. “The pain from that season has sunk in. The glory of this season hasn’t sunk in yet.”

That’s, in part, because the Minutemen’s ride from obscurity to the national spotlight isn’t over.

UMass now prepares for its most daunting test in facing defending champion Minnesota Duluth on Saturday. The Bulldogs (28-11-2) advanced to their third consecutive championship game with a 4-1 win over Providence.

Star defenseman and Hobey Baker award finalist Cale Makar can appreciate how big this moment is for the Minutemen.

“It’s definitely special for this school,” Makar said. “And I think the thing we’re going to be stressing tomorrow especially is we’re not done yet.”

Filip Lindberg, coming off consecutive shutouts in the first two rounds, stopped 37 shots. His best save of overtime came a little over eight minutes in when he got across to his left to stop Tyson McLellan, who got off a backhander from in close.

The Pioneers (24-12-5) were denied an opportunity to make their 11th championship game appearance and a shot to win their ninth title, and second since 2017.

RELATED: Denver looking for a share of history in Frozen Four

“We thought we were winning the game,” Staub said. “We though we battled back, we were resilient, and there was no doubt in our minds going into that overtime.”

Del Gaizo scored when Oliver Chau dug out a loose puck behind Denver’s net and fed a pass into the left circle. Del Gaizo one-timed the shot that beat Larsson inside the far post.

“I’m not a guy known for my one-timer, but ‘Chausy’ just put it on a tee with me there,” he said. “It was a perfect pass, right in my wheelhouse, perfect speed, so I just got a hold of it and it went in.”

The game was marred by questionable checks, which resulted in Chaffee, Hildenbrand, and Denver’s Ryan Barrow being ejected for illegal hits.

The Minutemen were running out of gas in missing two top forwards as the game progressed. They were outshot 15-4 in the third period and 35-21 before overtime.

Guttman scored goals less than six minutes apart, and tied the game with 3:46 left, when he was alone in front to tap in McLellan’s pass from the right corner.

Carvel could see the Minutemen’s momentum sag entering the locker room after the third period.

“The body language and the hanging and that mopiness, I said, ‘Fellas, done. Change. One goal. Next goal wins,” Carvel said.

“And I give them credit,” he added. “They’ve done things all year long that have impressed people, impressed me. I guess at some point, I think tonight in overtime, I felt they were going to find a way. And they did.”

Staub opened the scoring a little over two minutes after Hildenbrand was ejected 6:24 into the game, when he went high in checking McLellan.

The Minutemen responded by scoring three power-play goals in a span of 2:31.

After Trivigno tied it, Chaffee and Leonard scored 18 seconds apart during a 5-minute power-play after Barrow was ejected for hitting Del Gaizo in the head during a mid-ice collision.

NOTES: Chaffee was ejected with 3:48 left in the second period. Denver’s Ian Mitchell was cutting through the neutral zone when he was struck in the side of the head by Chaffee’s right shoulder. … Makar’s assist upped his season total to 49 points, one short of the nation’s leaders, Penn State’s Alex Limoges and Michigan State’s Taro Hirose. No defenseman has ever led the NCAA in points. … The Pioneers had six players left from their 2017 championship team.