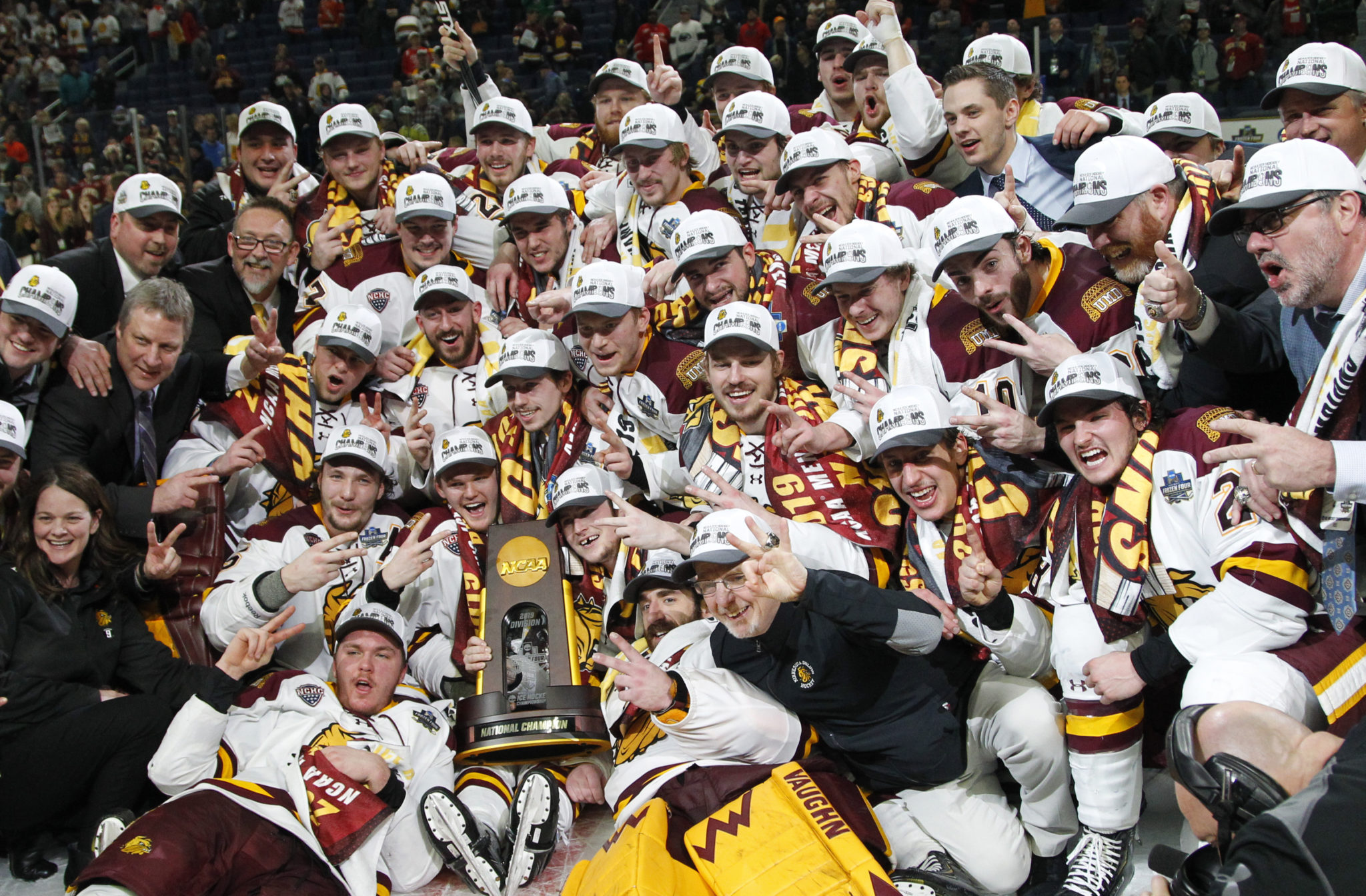 BUFFALO, N.Y. — Scott Sandelin acknowledged having his doubts through several low points of the season as to whether his Minnesota Duluth players were motivated enough to repeat as college hockey champions.

On Saturday, the Bulldogs coach could finally breathe easy after getting his answer.

Leaning on the leadership of senior and captain Parker Mackay and the stingy goaltending of junior Hunter Shepard, Minnesota Duluth became the ninth school to successfully defend its title following a 3-0 win over upstart Massachusetts.

“You never know how they’re going to come back. Are they really super motivated to get back there?” Sandelin said.

“I think that was probably the biggest challenge, trying to read them. And I think deep down they were,” he added. “They had a funny way of showing it because they’re really quiet, which quite frankly (ticked) me off sometimes, I’m not going to lie. But it was fun.”

Mackay was named the Frozen Four MVP after he opened the scoring and added an assist. Shepard stopped 18 shots for his seventh shutout of the season and nation-leading 29th victory, while improving his NCAA Tournament record to 8-0.

The Bulldogs (29-11-2) became the first school to win consecutive titles since Denver in 2004 and ’05. It’s the third championship for Minnesota Duluth, which beat Notre Dame in the Frozen Four final a year ago and also won in 2011.

Leave it to Mackay to lead the way in closing his career with a five-game point streak in which he combined for four goals and three assists. And that included opening the NCAA Tournament by scoring the tying goal with 3:01 left and then scoring the winner in a 2-1 overtime victory over Bowling Green.

“It’s incredible. Obviously, you can’t write it any better than that,” said Mackay, who appeared in 14 tournament games in which the Bulldogs reached three consecutive finals starting with losing to Denver in 2017.

“Shepy’s been our brick wall all season long. He was our most consistent player,” Mackay said. “I don’t think we are even close to where we are without him.”

Mikey Anderson had a goal and two assists and Noah Cates sealed the win by scoring with 2:42 remaining.

The Bulldogs’ experience on the big stage proved to be an edge over a young UMass opponent. The Minutemen (31-10) were making their first appearance in the championship game and in just the second tournament berth in school history.

UMass eclipsed its previous single-season-best win total of 21 in 2007, while also being two years removed from a five-win finish in coach Greg Carvel’s first season.

The game could potentially be the final one at UMass for Bulldogs sophomore defenseman Cale Makar. The Hobey Baker award-winning player has been weighing a decision on whether to turn pro and join the Colorado Avalanche, who are in the midst of a first-round NHL playoff series with Calgary.

The Avalanche selected Makar with the fourth pick in the 2017 draft.

Makar said he wanted to first have a discussion with his family and added: “Everything’s up in the air right now.”

Makar made a point to wear his No. 16 UMass jersey to the podium.

“I just want to keep it on as long as I can,” he said. “It’s a jersey I’m very proud to wear. Our team has brought so much respect to this program. It’s going to be a couple of years that I’ll never forget in my entire life.”

Coach Carvel initially joked that he hoped Makar would return for a third season before acknowledging the defenseman has likely played his last game at UMass.

“He’s unbelievable. I feel very fortunate that I got to coach him,” Carvel said. “I don’t expect him back. Just very grateful, very grateful.”

Freshman Filip Lindberg stopped 28 shots, and had little chance on either of the Bulldogs’ first two goals.

The Bulldogs dominated from the start and were outshooting the Minutemen 6-0 when Mackay opened the scoring 3:51 in with a power-play goal.

Riley Tufte began the play by controlling a bouncing puck at the right boards and feeding Anderson at the left point. Anderson immediately sent a pass into the slot, where a wide-open Mackay cut across and backhanded in a shot inside the left post.

The Minutemen didn’t manage their first shot on net until the 4:16 mark and were outshot 14-5 in the period.

Mackay then played a big role in setting up Anderson’s goal. Controlling the puck along the right boards, Mackay spun around in the corner and hit Anderson in stride while making his way to the high slot. Anderson took a few steps and snapped a shot inside the right post.

NOTES: UMass played minus forward Bobby Trivigno, who served a one-game NCAA suspension for an illegal hit to the head against Denver on Thursday. … With UMass advancing to the final, Hockey East has had an NCAA-leading 29 teams play for the title over the past 21 years. … Sandelin improved his tournament record to 21-6, and the Bulldogs’ 29 wins were the most since going 36-9-3 in 1984-85.