Finally at Miami, Martell now trying to win a job 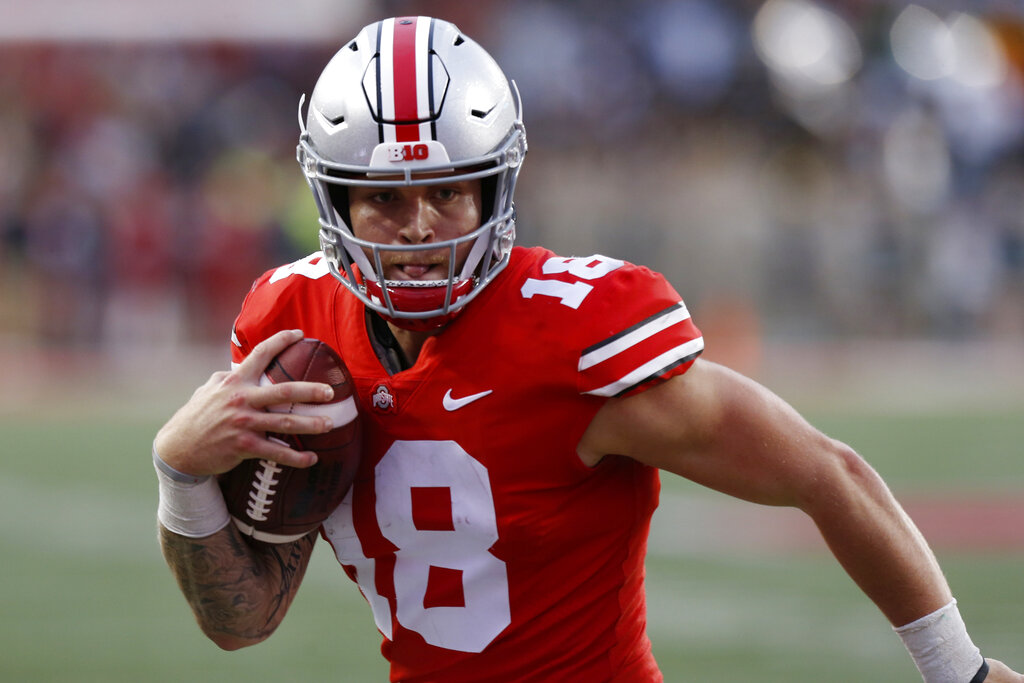 FILE - In this Sept. 22, 2018, file photo, Ohio State quarterback Tate Martell runs against Tulane during an NCAA college football game in Columbus, Ohio. Martell says he is transferring from Ohio State to Miami. Martell originally wanted Miami to notice him in 2016. The Hurricanes got around to it in 2019. Martell took a long, winding road to Coral Gables before transferring from Ohio State earlier this year, and the quarterback insists that he's finally ready to start succeeding. (AP Photo/Jay LaPrete, File)

Tate Martell originally wanted Miami to notice him in 2016.

The Hurricanes got around to it in 2019.

Martell took a long, winding road to Coral Gables before transferring from Ohio State earlier this year — and the quarterback insists that he’s finally ready to start succeeding. Speaking publicly for the first time since the Hurricanes started spring practice, Martell said the transition from Ohio State to Miami has been remarkably simple.

“I came in, did what I do, work hard, and it was easy because the guys in the locker room also took me in like they didn’t care I was a transfer,” Martell said. “They didn’t look at me like I was a transfer. They looked at me like this is my teammate, this is what we do, and I wouldn’t say it was really that difficult at all.”

Martell’s path to college has been like few others. He committed to Washington as an eighth-grader in 2012. By 2015, he was committed to Texas A&M. And the next year, after decommitting for a second time, he announced that he would be choosing from seven schools — Cal, Colorado, UCLA, USC, West Virginia, Ohio State and Miami.

“That was my way of trying to get them to talk to me,” Martell said of having the Hurricanes on that list.

Miami was quickly removed from his list of finalists and he ultimately went to Ohio State, sitting out 2017 as a redshirt and completing 23 of 28 passes in limited duty for the Buckeyes behind Dwayne Haskins last season. He decided to transfer, wound up picking Miami and was approved for a waiver from the NCAA earlier this month allowing him to play in 2019 without sitting out the customary year for non-graduates who change schools.

“Tate, he can make all the throws,” Miami coach Manny Diaz said. “He’s got good zip on his ball. And then from a physical standpoint, he gives you an element with his legs … that makes the defense have to defend two plays. There’s no doubt he’s got good skills. All of our quarterbacks are all being held to a ridiculously high standard by (new offensive coordinator Dan) Enos.”

But the Hurricanes are not ready to anoint Martell, or anyone else, the starter for 2019. N’Kosi Perry, who shared the job with now-graduated Malik Rosier last season, is back, as is redshirt freshman Jarren Williams. Perry was plagued by inconsistency on the field, and dealt with off-field issues that left coaches questioning his maturity as well.

“I definitely see myself as a starter and a big difference from me to last year is that I feel like I’m a lot more mature on and off the field,” Perry said.

Williams, meanwhile, said he’s eager to just have a real chance at the job.

“I’m just very confident in my abilities and with the competition my biggest thing is just not so much competing with Tate or N’Kosi, it’s really about competing with myself and being the best player I can be,” Williams said.

Diaz wants all three quarterbacks to carry themselves like the starter. Only one will be under center when the season starts Aug. 24 against Florida in a neutral-site game at Orlando, and Martell is obviously eager to be that guy.

The Hurricanes are clearly looking for upgraded quarterback play this season, after managing only 19 touchdown passes and 2,175 passing yards — their fewest in 11 years — last season.

Out of 130 FBS schools nationally, Miami ranked 108th in passing yards and 118th in completion percentage in 2018.

“The history and the swagger that people play with here, that’s kind of what intrigued me from the jump,” Martell said. “I’m not sitting here looking at myself that I have to come here and save the program. I feel like we just have to follow the plan coach Diaz has in place and then offensively we need to execute what coach Enos runs and we will be perfectly fine.”