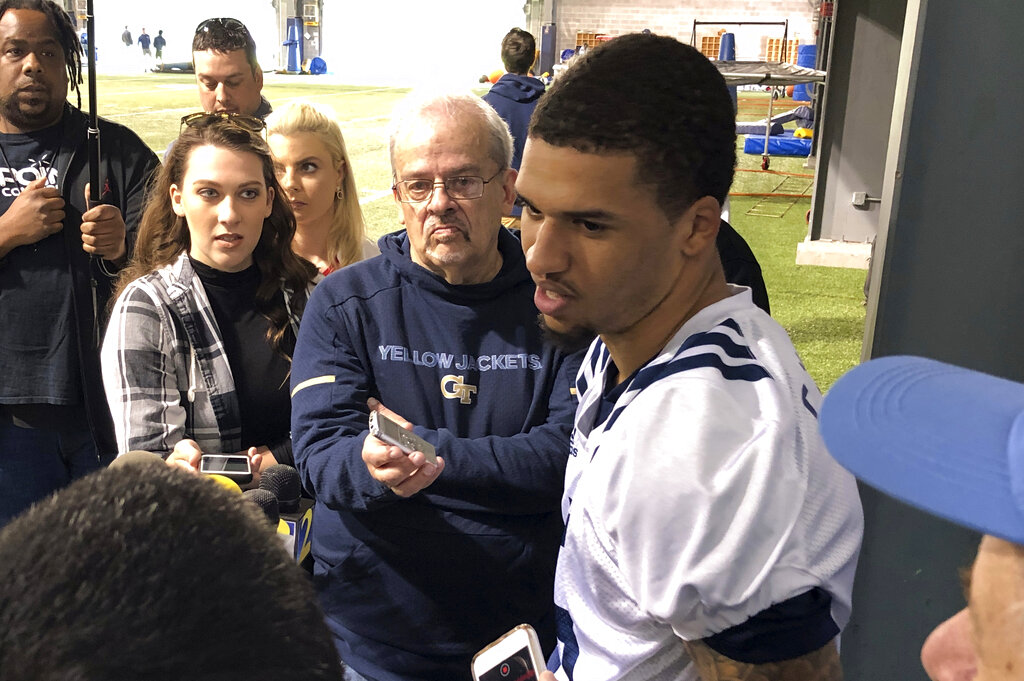 Georgia Tech quarterback Tobias Oliver talks with the media after NCAA college football practice Thursday, March 28, 2019, in Atlanta. The team is mourning the death of defensive lineman Brandon Adams, who was expected to be a key member of the team this season. (AP Photo/Paul Newberry)

ATLANTA (AP) — On a chilly spring morning, the sun shining brightly under a brilliant azure sky, the Georgia Tech players balled up a fist and thumped their chests a couple of times. Then they put up five fingers on one hand, four on the other, signifying a 90. After pounding their chests two more times, they all bellowed in unison, “Big B!”

Only days removed from the death of their friend and brother, the Yellow Jackets struggled to regain a sense of normalcy Thursday with the grind of spring practice.

For the most part, it seemed like just another two-hour-plus workout, the first of many they’ll go through before their first season under new coach Geoff Collins begins Aug. 29 with a daunting game at reigning national champion Clemson.

Everything from rap to country music blared from speakers, keeping the energy up and everyone on their toes. Coaches shouted instructions and chastised those who went the wrong way or missed an assignment. Those battling for playing time screamed in delight when they made a good play, or berated themselves when a pass slipped through their hands or a teammate got the best of them.

Of course, it was practically impossible to make anything about this day routine.

On Sunday, everyone was leveled by the jarring news that Adams, a massive defensive lineman who liked to dole out hugs and laughed from deep in his belly, had died the night before at age 21. On Monday, they attended an emotional memorial service right across the street at Georgia Tech’s basketball arena. On Tuesday, the players decided to go through with their first spring practice, as scheduled, but asked that the media be kept away so they could continue grieving with a bit of privacy. On Saturday, they’ll board several big buses and make the four-hour drive to Adams’ hometown on Nashville, Tennessee, for his funeral service.

Then they’ll return to Atlanta to get on with life as best they can.

No one is quite sure why Adams died heading into what should have been his senior year of college. An autopsy was performed, but the results were inconclusive. Investigators are now awaiting the results of toxicology tests, though there’s been no indication of foul play.

The football family that Adams left behind is still trying to make sense of it all.

“We all had to come together and pick everybody up,” said Lucas Johnson, a third-year sophomore who’s battling for the starting quarterback job. “We’ve been getting through it. I think we’ve been doing right by him.”

Adams, a 6-foot-2, 325-pound tackle who had struggled to keep his weight under control, was coming off his best season. He got his first three career starts and was looking forward to being a key figure on a revamped defensive line. If he kept up his improvement and kept himself in shape, some thought he had the potential to make it in the NFL.

“It’s been tough,” said Tobias Oliver, another of those involved in the quarterback battle. “I feel like some guys are dealing with it better than others. The guys that are dealing with it are picking other guys up. As a team, we’re pretty uplifting. We’re doing it all for Brandon.”

Practice helps with the healing.

“It gets your mind off things,” Oliver said. “When you’re playing football, the only thing that matters is football.”

Until this past weekend, there has been a surge of enthusiasm and good feelings within a football program that had grown a bit stale the last few seasons. After the retirement of longtime coach Paul Johnson, Collins arrived from Temple and quickly put his stamp on the Atlantic Coast Conference team.

He ditched Johnson’s triple-option in favor of a high-tempo, spread offense that is more in tune with today’s times. He bounced around the A-T-L, never turning down a chance to promote his program, vowing to transform the Yellow Jackets into a team that was hip to cheer for and fun to watch. He crowed about his love for Waffle House on social media, a surefire way to make a good impression with the locals.

It’s a challenge, to be sure, in a state where the Yellow Jackets have long played second fiddle to the mighty Georgia Bulldogs.

Turns out, it’s nothing compared to what Collins is going through now.