Four of the five strongest teams in the American Athletic Conference — the cream of the crop when it comes to the so-called Group of Five conferences — play in the league’s East Division. Only one of them will emerge as the division champion. 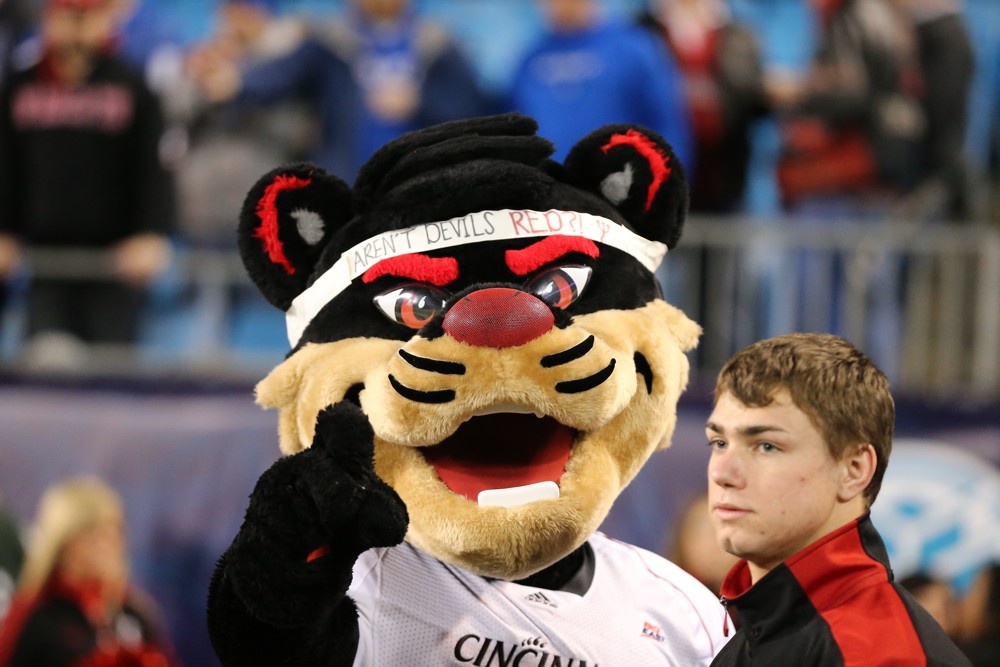 Coming off its best season since 2009 when Brian Kelly’s Sugar Bowl-bound Bearcats finished 12-1 and claimed the Big East title, Cincinnati (11-2) — the nation’s surprise team in 2018 — has to be given a slight edge over two-time defending AAC champion UCF, a tough Temple team looking for its second conference crown, and surging South Florida in what promises to be a thrilling and hotly-contested divisional race.

The Bearcats, whose running game flourished in 2018, return sensational running back Michael Warren II, a 5-11, 222-pound junior who rushed for 1,329 yards and scored 19 touchdowns a year ago. One of seven returning players who compiled a total of 5,000 yards last year, Warren will be joined in the backfield by 5-10, 170-pound junior Gerrid Doaks, the team’s leading rusher in 2017 who missed last season due to injury.

Sophomore quarterback Desmond Ritter, the AAC Newcomer of the Year who threw for 2,445 yards and 20 touchdowns and rushed for an additional 583 yards and five touchdowns in 2018, should have plenty of throwing options among a talented receiver corps expected to fill the void left by departing senior Kahlil Lewis, who led the team in receptions, yards and touchdown catches.


Defensively, Cincinnati will have to replace five starters from a starting unit that finished eighth nationally in scoring defense, allowing just 17.2 points per outing, and eleventh in total defense, but should have enough talent in a strong group of linebackers and defensive backs to stymie even the most productive of AAC offenses.

It’s not easy going against UCF (12-1) to repeat, but a new quarterback in the wake of McKenzie Milton’s gruesome knee injury that nearly cost him his right leg late last year, and some questions surrounding a somewhat depleted defense, which returns only five starters from last year’s squad, coupled with the fact that the Knights have to play divisional challengers Cincinnati and Temple on the road this year, suggests that another undefeated regular season is probably out of the question.

Despite these obstacles, UCF’s overall talent level, especially its multi-talented rushing attack which features one of the fastest running backs in the country in senior Adrian Killins, Jr., and its secondary led by defensive back Richie Grant, a redshirt junior who boasted a team-high 109 tackles and an AAC-leading six interceptions a year ago, should be enough to keep the Knights in the hunt for a third consecutive AAC title.


Don’t discount new head coach Rod Carey’s Temple Owls (8-5) during his inaugural season. Carey, who won 23 of his first 29 games and 52 games overall in seven seasons as head coach at Northern Illinois, inherits thirteen returning starters from a mentally-tough team that went a sizzling 7-1 in the conference last year after opening the season with somewhat embarrassing back-to-back losses to Villanova and Buffalo.

Temple, moreover, defeated Cincinnati 24-17 in overtime last year and gave league-leading and undefeated Central Florida everything it could handle in a 52-40 loss at Spectrum Stadium in Orlando. In a memorably wild game that featured a combined 1,300 yards and seventy first downs, the visiting Owls rallied from behind and had a chance to tie the game in the fourth quarter, but failed on a two-point conversion that would have tied the game at 42 apiece with 9:44 remaining. Returning quarterback Anthony Russo, who guided his team to seven victories in ten starts, completed 31 of 52 passes for 444 yards and four touchdowns for Temple in that game.

The two teams will face each other in Philadelphia on October 26th.

Carey, who was more than a little pleased by how his team performed this past spring, likes to run the ball and reportedly will rely heavily on senior Jager Gardner to lead the rushing attack. Russo is expected to be the starting quarterback, but sophomore Todd Centeio of Palm Beach Gardens, Florida, who saw action in eleven games in 2018, will probably also see some playing time because of his genuine dual-threat abilities.

Defensively, Temple’s linebacker unit is one of the best in the country and the secondary is expected to be stronger. Moreover, new defensive coordinator Jeff Knowles, who served in the same role under Carey at Northern Illinois the past two seasons, brings some serious defensive accomplishments to Philadelphia. Surpassed only by Clemson, which had 54 sacks, his Huskies were second in the nation in sacks last season with fifty.

Led by classic drop-back passer Blake Barnett, who led the Bulls to three dramatic fourth quarter come-from-behind victories last year, South Florida (7-6), which lost six straight to finish the season after winning its first seven games — one of the most monumental collapses in memory — could be a sleeper in the American Athletic Conference, but will need to shore up its defense, which surrendered a staggering 446.6 yards per game if it hopes to seriously challenge Cincinnati, UCF and Temple in the East.

There are far fewer worries on offense as former Valdosta State head coach Kerwin Bell, whose Div. II Blazers averaged a head-turning 52 points per game last season, is expected to revitalize an offense that only managed to put 17 points per game on the board during the final five games of the season after averaging an impressive 35.6 points per outing through USF’s first eight contests.


Hoping to spread the field from sideline to sideline and attack vertically by air, East Carolina (3-9) should show some modest improvement under new head coach Mike Houston, who guided James Madison University to the 2016 FCS national championship, but in all reality conference victories will probably be few and far between in his maiden season.

That said, the energetic Houston has the ability to turn things around fairly quickly, so look out for his pesky Pirates in 2020 and beyond.

New offensive and defensive coordinators at UConn (1-11) should help a team that struggled to put points on the board while giving up 617.4 yards — or more than 8.8 yards per play — and 50.4 points per game last season, but it’s hard to imagine the lowly Huskies beating anyone in their division this year.


With an offense that averaged 42.9 points per game in what was supposed to be a rebuilding year, imagine how potent Memphis (8-6) might be this season, especially with seven of eleven starters returning on offense.

Despite the loss of two of its most productive running backs, the Tigers will remain explosive with Brady White, who threw for nearly 3,300 yards and 26 touchdowns last season, at quarterback, Damonte Coxie — one of only three 1,000-yard receivers in program history — at wide receiver, and Patrick Taylor, Jr., who rushed for 1,122 yards and sixteen touchdowns on the ground, leading the running attack. A rebuilt offensive line will presumably only make the dynamic trio better.

If Memphis can figure out how to maintain leads in the second half, it should find itself playing in the AAC championship game for a third straight year.

After an impressive 7-1 start last season, Houston (8-5) stumbled down the stretch, allowing a staggering 243 points while losing four of its last five games, including an almost inexplicable 70-14 shellacking at the hands of nationally-ranked Army in the Armed Forces Bowl.

Offensive-minded new head coach Dana Holgorsen, who signed a five-year contract worth $20 million — the most expensive deal ever inked by a non-P5 conference school — will have to figure out how to

plug his team’s leaky defense if the Cougars are going to contend with Memphis in the AAC West Division.


Coming off its first bowl victory in sixteen years — a 41-24 pasting of Louisiana in the AutoNation-sponsored Cure Bowl in Orlando — Tulane (7-6), possessing a championship-caliber defense and employing an up-tempo approach under new offensive coordinator Will Hall, could potentially overtake Houston in the West with a victory at home against the Cougars on Sept. 19, thereby setting the stage for a showdown with division leader Memphis a month later.

With 1,000-yard rusher Darius Bradwell, who had a breakout season as a junior, graduate transfer quarterback Justin McMillan of LSU, a bona-fide dual threat, and wide receiver Darnell Mooney returning, coupled with the addition of Oklahoma State grad transfer Jalen McCleskey, who boasts 167 career catches for 1,865 yards, the Green Wave could be the wild card in the AAC West.

Tulsa (3-9) should be vastly improved, especially with the addition of Baylor transfer Zach Smith at quarterback. Smith, a redshirt junior, threw for 463 yards and four touchdowns against third-ranked Oklahoma in a 49-41 loss to the Sooners in 2017.

Defensively, the Golden Hurricane experienced a remarkable turnaround in 2018, giving up 121.2 fewer yards per game than the previous season while finishing eighth in the nation against the pass.

With one of the most attractive home schedules in program history, Tulsa hosts Oklahoma State, Wyoming, Memphis, Navy, UCF and Houston this season.


Inconsistency at quarterback, an inadequate receiving corps and a multitude of injuries on the offensive line foiled Sonny Dykes’ first full season at SMU (5-7), but things should look brighter this season with the addition of Texas graduate transfer Shane Buechele as signal caller. Buechele, a one-time starter for the Longhorns, completed 62 percent of his passes while throwing for 4,636 yards and thirty touchdowns in his three seasons at Texas.

Travel-weary Navy (3-10), which logged 26,496 miles in 2018 — the most of any FBS team in the country except for Hawaii — has a more reasonable travel schedule this year and won’t have to play AAC powers UCF, Cincinnati and Temple, but with only three starters on offense and a similar number on defense returning, anything approaching a .500 season seems like a stretch for the Midshipmen.