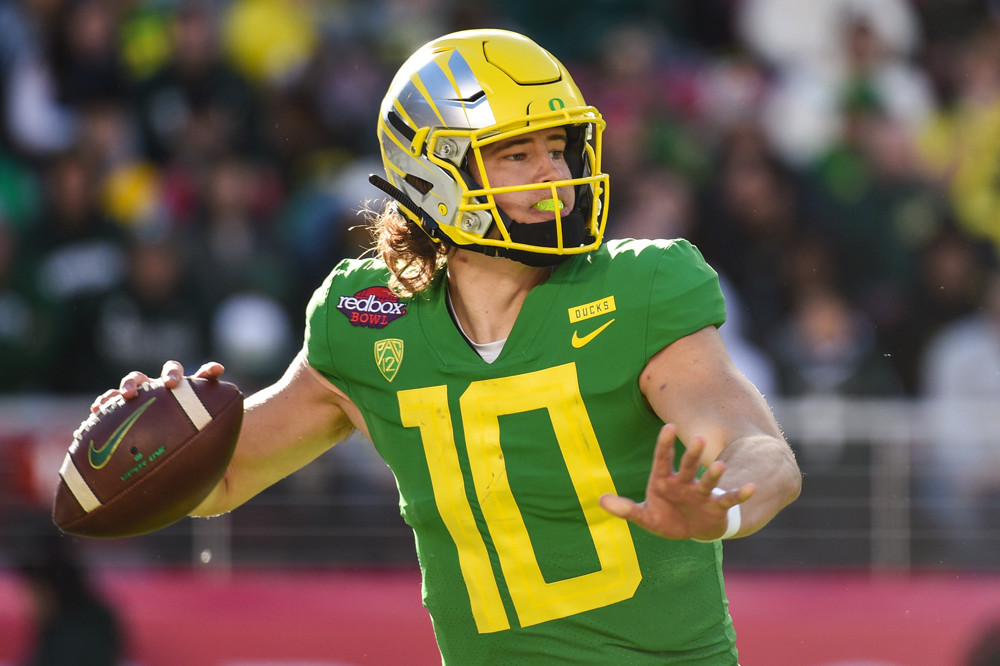 After a two-year drought, the Pac-12’s hopes for returning to the College Football Playoff (CFP) for the first time since the Washington Huskies were thumped 24-7 by top-ranked Alabama in 2017 realistically hinge on the ability of Oregon quarterback Justin Herbert, who opted out of the 2019 NFL Draft, to lead the Ducks to their first league title since 2014.

The soft-spoken Heisman hopeful, who threw for 3,151 yards and 29 touchdowns last season, is one of sixteen returning starters for Oregon (9-4), which opens the season against Auburn in Arlington, Texas, on August 31 in what could be a make-or-break game in terms of having a realistic shot at this year’s coveted four-team CFP. A loss there could doom Oregon’s — and the Pac-12’s — chances of earning a playoff spot.

While the Ducks are the preseason favorite to capture the Pac-12 championship, they’ll likely receive a strong challenge from Washington State (11-2) in the North Division.


Head coach Mike Leach’s explosive air assault is expected to continue with the addition of FCS Eastern Washington grad transfer Gage Gubrud, a two-time finalist for the Walter Payton Award who threw for a whopping 9,984 passing yards and 87 touchdowns in three seasons with the Eagles.

Gubrud, who sustained an injury in spring practice, is expected to receive competition from returners Trey Tinsley, a fifth-year senior, and 6-3 Anthony Gordon for the starting quarterback position, but has long been on WSU’s radar after throwing for 474 yards against the Cougars in a stunning 45-42 upset victory in his starting debut in 2016. Gubrud, who completed a jaw-dropping 34 of 40 passes while personally accounting for 551 of EWU’s 606 yards, threw five touchdown passes and rushed for 77 yards in that contest, including a game-clinching 30-yard touchdown run.

Gubrud will have plenty of throwing options since WSU returns its four top receivers, led by versatile wide receiver Tay Martin, a 6-3, 185-pound junior who caught 69 passes for 685 yards and scored eight touchdowns in 2018.

Defensively, the Cougars lost five starters, but should be helped by 295-pound West Virginia transfer Lamonte McDougle, a nose tackle capable of clogging the middle — and much more.

Leach’s air-it-out offense should be able to light it up with early-season home games against New Mexico State and Northern Colorado and a road trip to Houston before beginning Pac-12 play with a home encounter against UCLA on September 21.

Though favored by several college football preseason publications, Washington (10-4) could have difficulty defending its crown.

The Huskies, who are facing something of a rebuilding year after losing thirteen starters, including nine on defense, nevertheless have plenty of reason for optimism heading into the 2019 campaign with the addition of quarterback Jacob Eason, a Georgia transfer whose pro-style arm will receive plenty of protection from Washington’s huge and experienced offensive line.


The big question mark will be the defense, which returns only two starters from 2018.

A relatively easy non-conference schedule against FCS opponent Eastern Washington, Hawaii and BYU should give the Huskies time to develop suitable replacements on defense, especially at inside linebacker and in the secondary, where only one last year’s five starters returns.

Conventional wisdom suggests that Stanford will be battling for the fourth spot in the Pac-12 North, but we think California (7-6) will be contending for that spot.

The Golden Bears, under youthful third-year head coach Justin Wilcox, return thirteen starters and, led by inside linebacker Evan Weaver, a 220-pound one-man tackling machine, and a vastly improved secondary, boast one of the most improved defensive units in the conference, if not the country.

Impressively, California ranked second in the nation last season in interceptions with 21 and the players who accounted for 20 of those picks are back. Moreover, Cal’s defense was fifteenth in the country in total defense and led the Pac-12 in interceptions, forced turnovers, defensive touchdowns and passing defense, allowing a relatively meager 175 yards in the air per game — excellent traits in a conference where stingy defense is expected to play a huge role in 2019.

If cash-strapped Cal, which stunned conference champion Washington 12-10 last season without scoring an offensive touchdown courtesy of a theatrical 37-yard pick-six by Evan Weaver, can make some significant strides offensively, particularly in the red zone, it could be a surprise factor in the division.

Unfortunately, the Bears will have to play division powers Oregon and Washington on the road this season, as well as making trips to Pac-12 rivals Utah, Stanford and UCLA — a brutally tough conference schedule by any measure.


Stanford (9-4), too, shouldn’t be taken lightly. The Cardinal are capable of beating almost anyone in the Pac-12 on any given Saturday, but can they do it consistently, especially after losing quarterback K. J. Costello’s favorite targets in wide receivers J. J. Arcega-Whiteside and Trenton Irwin, who combined for 1,744 yards on 123 catches and sixteen touchdowns in 2018? Also gone is tight end Kaden Smith, who had 47 receptions for 635 yards and two scores last season.

Defensively, Stanford lost five starters, including much of its line-backing corps and its secondary, but should be helped by 6-1, 190-pound cornerback Paulson Adebo, who picked off four passes last season while leading the nation by breaking up 24 passes while also making 64 tackles.

The North basement, alas, belongs to hapless Oregon State (2-10), whose defensive line was pushed around and was utterly unable to stop the run last year, yielding nearly 282 rushing yards per game. Overall, the Beavers gave up a deeply shocking 536.8 yards per outing while allowing opponents to put up an average of 45.7 points per game last season — the second-worse total defense in Division I. Only UConn was worse.

Without vast improvements from a defensive unit that yielded a staggering 77 points in a pulverizing 46-point loss to Ohio State, 56 to Pac-12 rival Washington State, 55 to Oregon and 52 to Arizona State — even Cal’s sputtering, anemic offense scored a season-high 49 points against the porous Beavers — it’s hard to see how Oregon State can dig its way out of the cellar anytime soon.


Thanks to a somewhat prolific running attack led by running back Jermar Jefferson, a 5-10, 214-pound dynamo who rushed for 1,380 yards and a dozen touchdowns last year as a freshman, things look a little brighter offensively for second-year coach Jonathan Smith, but it looks like another long season is in store for a program that hasn’t claimed a Pac-10 championship since 2000 when it shared the title with Oregon and Washington, each finishing that memorable season with a 7-1 mark.


Playing with an underdog mentality — a trademark of Kyle Whittingham’s coaching philosophy — Utah (9-5) should have little trouble successfully defending its Pac-12 South title this year and could be a genuine Rose Bowl possibility.

Except for some losses on the offensive line, the Utes return almost everyone who handled the ball in 2018, including dual-threat quarterback Tyler Huntley, a “football fanatic” who missed the final five games last year after suffering a broken collarbone in a 38-20 loss to Arizona State in Tempe in early November.

Defensively, Utah appears to be in pretty good shape, too, with its returning front four anchoring a defensive unit that led the Pac-12 against the run while finishing second in overall defense last season.


Arizona State (7-6) surprised everybody last season by making a serious run at the South title after being forecast to finish last in the division.

If there’s any team in the division that could throw a scare — even a mild one — into preseason South favorite Utah, it’s second-year head coach and former ESPN pro football analyst Herm Edwards’ Sun Devils, who return star running back Eno Benjamin, a potential breakout player who looks to beat his own single-season rushing record of 1,642 yards on 300 carries.

ASU might also have a “secret weapon” in versatile quarterback Ethan Long, a true freshman and finalist for the Oregon’s Prep Football Player-of-the-year after throwing for 3,247 yards and 31 touchdowns and running for eight more during his senior year at West Linn High School last season. Long is expected to play a major role in ASU’s offensive scheme.

Defensively, Arizona State lost only three starters from the youngest defensive unit in major college football and, with a year of experience under their belts, the Sun Devils should be vastly improved on that side of the ball.

With so many offensive and defensive starters returning, UCLA (3-9), coming off its worst season since 1971, could experience one of the most remarkable turnarounds in the country this year under second-year coach Chip Kelly, a former NFL head coach, but the Bruins will need to improve dramatically on defense after yielding 444.9 yards per game — 245.5 in the air — last season while giving up 30 or more points in nine of their twelve games.

Kelly is building something special in Los Angeles and six or seven wins overall and a bowl appearance is a real possibility this year.


Despite boasting one of the nation’s top receiving corps, a brutal schedule, which includes nonconference tilts at BYU and nationally-ranked Notre Dame and early-season Pac-12 games against Stanford, Utah and Washington — the latter game on the road — could hamper once-proud USC (5-7) right out of the starting gate, but if the Trojans can somehow defeat Stanford and spring an upset against Utah in Los Angeles in September before heading to Washington later in the month they could definitely emerge as a serious contender in the South.

A lack of depth at several key positions, however, makes that prospect highly unlikely. In fact, their second losing season since 2000 — and their first back-to-back losing seasons since the John McKay era in 1960-61 — could be in store for the diehard Southern Cal faithful. If that happens, 47-year-old coach Clay Helton’s job could be in serious jeopardy, perhaps even before the season concludes.

Since it really can’t depend on its defensive unit, which ranked 92nd of 129 teams nationally in total defense last year, Arizona (6-6) will have to rely heavily on its offensive weapons if it hopes to make any progress in 2019.

Those weapons include quarterback Khalil Tate and diminutive running back J. J. Taylor, who rushed for 1,434 yards last season, but the Wildcats lack an offensive line with any depth or experience to provide the once scrambling-turned-pocket passer Tate with the kind of protection he’ll need, not to mention creating the kinds of openings that the 5-6, 184-pound blurry-quick Taylor will need to improve upon his outstanding 2018 performance.

Unfortunately, it could be a long season for the Wildcats.


After identical back-to-back 5-7 seasons, the second occurring after a promising 5-0 start last year, Colorado (5-7) fans — longing for a consistent winner — are hoping for big things under new head coach Mel Tucker, a former Alabama and Georgia defensive coordinator who briefly served as interim head coach of the Jacksonville Jaguars in 2011.

With some solid playmakers to build around on both sides of the ball, including intimidating inside linebacker Nate Landman, sophomore tackle William Sherman, quarterback Steven Montez and all-league

wide receiver LaViska Shenault, Jr., don’t be surprised if Tucker’s winning pedigree and hard-nosed style produces a surprise or two during his inaugural season, maybe even enough for the Buffs to finish out of the basement and in the middle of the Pac-12 South. Although universally picked in preseason polls to finish last, it could happen.