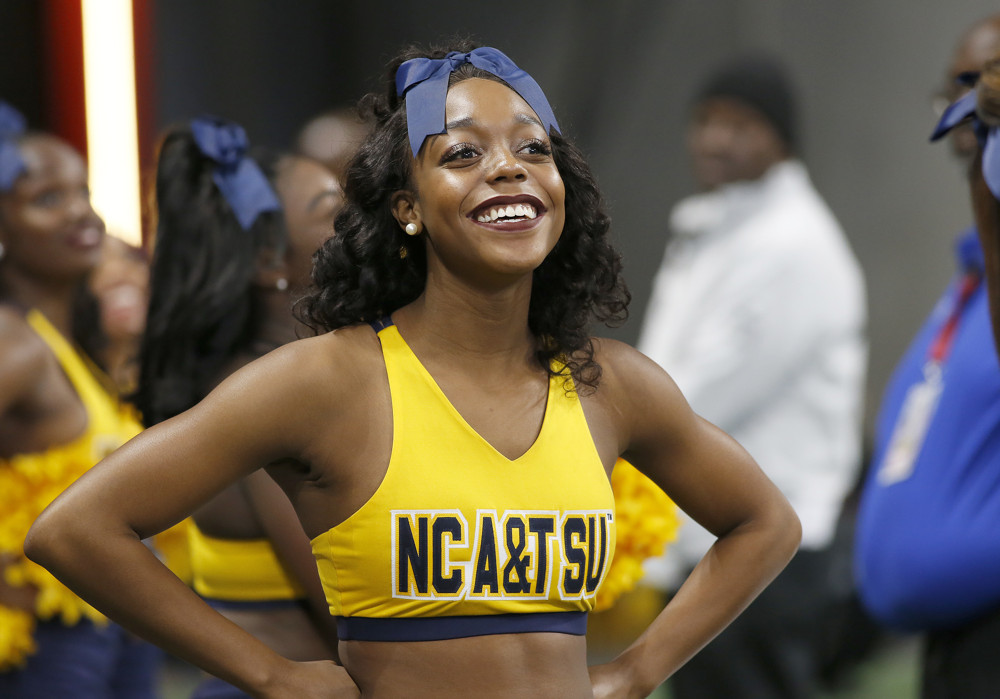 Despite returning only eight starters, two-time reigning Celebration Bowl champion North Carolina A&T (10-2) should be given the edge in the Mid-Eastern Athletic Conference (MEAC), a conference down to nine members following Hampton University’s departure to the Big South and struggling Savannah State’s transition back to Division II.

Sam Washington’s Aggies, who have won the Celebration Bowl three times in the bowl’s four-year existence, will be led by fifth-year quarterback Kylil Carter, who saw action in eleven of the team’s twelve games last year, with wide receivers Elijah Bell and Zachary Leslie, who combined for 1,217 receiving yards and fifteen touchdowns last season, as his primary targets.

This year the Aggies take on the ACC’s Duke Blue Devils in Durham on Sept. 7th.

“We have a bunch of guys who have a will to win,” said Washington after his team beat East Carolina for its third straight victory against FBS teams.  “You can see that will to win every time these guys step on the field,” he continued.  “When you have a bunch of guys who are willing to fight until the final whistle you can’t help but be successful.  I’m proud of the way these guys hung in there.  These men truly believe they can line up and be successful against any team in the country.”

Duke should be worried.

One of only two other MEAC teams to post a winning record in 2018, second-year head coach Willie Simmons could potentially lead Florida A&M (6-5) into contention if the Rattlers can avoid a late-season collapse this year.  Following a pretty solid midseason stretch, FAMU was in the thick of the MEAC hunt last season before losing their final three games.

Bethune-Cookman (7-5) could be a factor, too, but lost a number of key playmakers on offense making a championship run unlikely in 2019.  The Wildcats will have to rely heavily on their defense, especially linebacker Marquis Hendrix, who had 83 tackles last season, and 6-4, 235-pound lineman Marques Ford, who had 8.5 sacks.


With junior Caylin Newton as signal caller, look for Howard (4-6) to make some noise this season.

Newton, the younger brother of the NFL’s Cam Newton, produced 3,133 yards of total offense last season, including tossing 22 touchdown passes.  Incoming head coach Ron Prince, best known for his earlier stint at Kansas State and who worked as an offensive analyst at Michigan last season, will also have plenty of other offensive weapons at his disposal as the Bison look to move into MEAC’s top tier.

Despite APR sanctions preventing it from holding spring practice, look for Morgan State (4-7) — a squad picked to finish last in most preseason magazines — to make some serious strides this season under new head coach Tyrone Wheatley, a former Michigan and NFL running back and most recently an assistant with the Jacksonville Jaguars.  Impressively, the Bears upset North Carolina A&T 16-13 in Greensboro last year and lost three games by three points or less.

After posting its first losing season in five years, look for North Carolina Central (5-6) to improve defensively under new head coach Trei Oliver, a former defensive coordinator at Southern, and return to the winning side of the ledger.  The Eagles finished at or near the bottom of the MEAC in virtually every defensive category last season.

If Norfolk State (4-7) can cut down on turnovers the Spartans could finish above .500.  The errant green and gold coughed the ball up eleven times and threw seventeen interceptions in 2018.

Despite winning five of its final seven games last year, South Carolina State (5-6) will need an improved passing game if it hopes to finish with another winning conference record in the rough-and-tumble MEAC.


Delaware State (3-8) showed signs of life late in the season by winning three of its final four games after an 0-7 start in 2018, but wins are likely to be few and far between for former NFL lineman and second-year coach Rod Milstead again this year.

There will be nine games between MEAC schools and FBS teams this season, including a matchup between Bethune-Cookman and Miami on September 14th and the previously noted North Carolina A&T-Duke contest a week earlier.

Surprisingly, Mid-Eastern Athletic Conference teams have defeated FBS opponents in five of the past six seasons and — much to the league’s credit — have historically accounted for a disproportionate number of the FCS upsets against FBS squads.