The Longhorns and hometown quarterback Sam Ehlinger are coming off their first 10-win season since 2009. 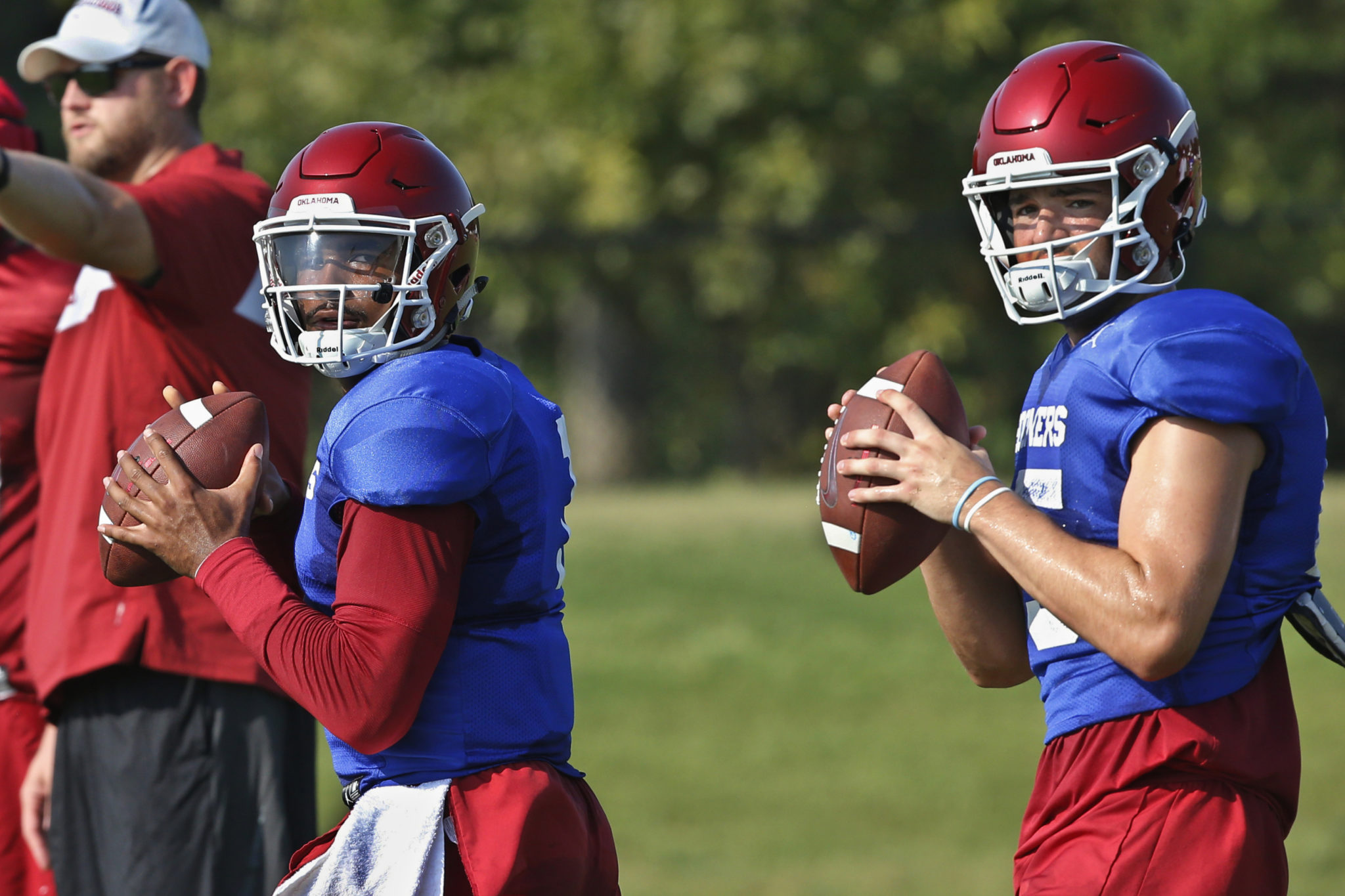 Red River rivals Oklahoma and Texas met twice last season for the first time in 115 years, when the Sooners won their fourth consecutive Big 12 championship by avenging their only regular-season loss.

Oklahoma now has another transfer quarterback — former national championship winner Jalen Hurts — after their transfer QBs the past two seasons both were Heisman Trophy winners and No. 1 overall NFL draft picks, all since Lincoln Riley became head coach. The Longhorns and hometown quarterback Sam Ehlinger are coming off their first 10-win season since 2009, a quick turnaround under third-year coach Tom Herman.

So it really wouldn’t be that much of a surprise if they again get to play a second game in the same season outside their traditional October game at the State Fair of Texas.


Especially in a season following the biggest coaching turnover ever in the Big 12 with four new coaches, including two who have won national championships. Les Miles takes over at Kansas a dozen seasons removed from his title at LSU and nearly three years after his last game, while new Kansas State coach Chris Klieman won at the FCS level with four championships in five seasons as North Dakota State’s head coach after three as a defensive coordinator there.

Suddenly only Oklahoma State’s Mike Gundy (15th season) and TCU’s Gary Patterson (19th season) have been head coaches in the Big 12 longer than Matt Campbell, whose Iowa State team with sophomore quarterback Brock Purdy may be ready to make a push for a spot in the Big 12 title game in his fourth season.

“Phenomenal job, and I’m glad he stayed,” Riley said of Campbell. “Not glad from a competitive standpoint, but he’s a heck of a coach. He’s done a great job. His players play their tails off, made a big improvement obviously in that program in a short time.”

The Cyclones have had consecutive 8-5 seasons under their 39-year-old coach who has already drawn interest from NFL teams. They had nine losing seasons in the 10 years before Campbell arrived in Ames, Iowa, after his four seasons as head coach at Toledo.


“When I first got to Iowa State, all of the questions were what color uniforms are you wearing, what’s your entrance song. People cared about stuff that really doesn’t matter,” Campbell said. “Now we’re talking about a football team. We’re asking football questions, and we’re concerned about what’s really important.”

The Big 12 hasn’t had a national champion since the 2005 Texas team led by Vince Young.

While Miles and Klieman get started in the Sunflower State, the league’s other new coaches are Neal Brown at West Virginia and Matt Wells at Texas Tech. Wells left his alma mater after six seasons at Utah State. His only previous coaching stop at a Power Five school was as an assistant at Louisville 10 years ago. While Brown comes to the Big 12 after 35 wins and three bowl wins the last four seasons at Troy, he is no stranger to the Big 12. He was Texas Tech’s offensive coordinator from 2010-12 before going to Kentucky in the SEC for the same role.

Oklahoma is the only Big 12 team to make it to the College Football Playoff, but has lost in the semifinal game three of the last four years.

“We haven’t played a complete game in those semifinal games. Not necessarily one side of the ball or the other,” Riley said.

The Sooners, whose last national title was 2000, have like defending national champion Clemson won four consecutive outright conference titles. Baker Mayfield led them to three in a row after beginning his college career as a walk-on quarterback at Texas Tech, and was succeeded last season by former Texas A&M quarterback and top-10 MLB draft pick Kyler Murray. Hurts transferred from Alabama.

“It’s just hard every year. It’s not really staying on top to me,” Riley said. “And winning it again this year would be just as hard.”

While Marquise Brown, Lil’Jordan Humphrey, Antoine Wesley and Hakeem Butler are all in NFL camps after bypassing their senior seasons in the Big 12, the league returns three junior receivers who also had more than 1,000 yards receiving last season.

Oklahoma State’s Tylan Wallace led the Big 12 and was second nationally last season as a sophomore with 1,491 yards receiving, on 86 catches with 12 touchdowns. CeeDee Lamb, who will likely get even more opportunities at Oklahoma with Brown gone, had 65 catches for 1,158 yards and 11 TDs. Speedy TCU playmaker Jalen Reagor caught 72 passes for 1,061 yards and nine touchdowns.

Dana Holgorsen spent the past eight seasons at West Virginia, including the Mountaineers’ first seven years in the Big 12, before leaving to take over at Houston. Holgorsen’s Houston debut Sept. 1 will be in the Big 12, at Oklahoma.

Oklahoma State will be the first Big 12 team to play this season, Aug. 30 at Pac-12 team Oregon State.

Texas will get an early test in the second weekend of the season when the Longhorns host LSU.