Warner: UCF will never make it to the College Football Playoff

But another Group of 5 team will, and they’ll have UCF to thank. 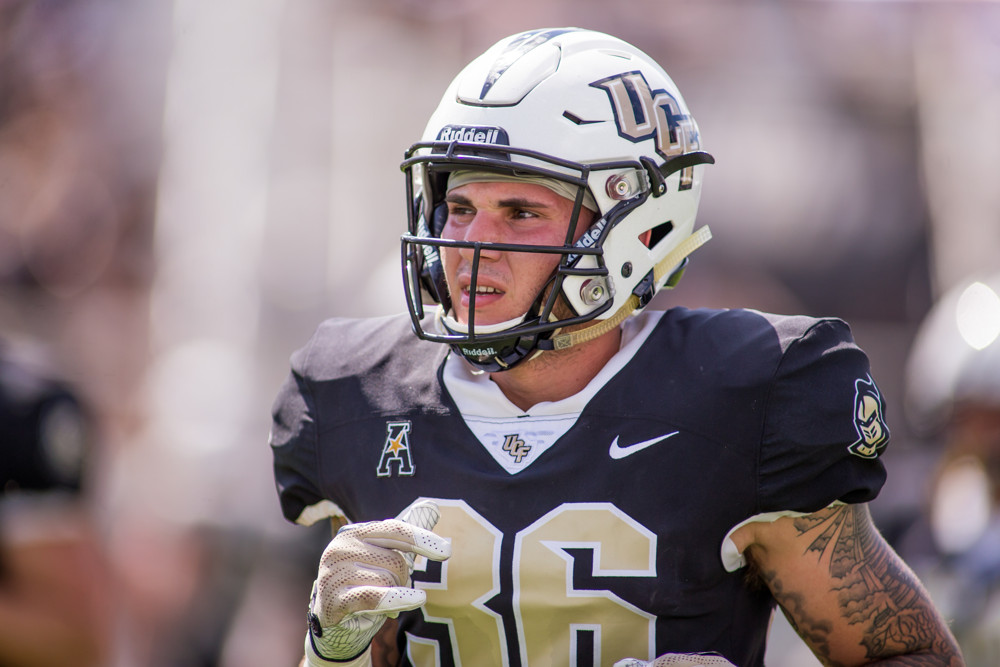 We are inside of a month before the kickoff of the 2019 college football season and teams all over the country have begun their fall practices with high hopes.

Optimism abounds this time of year, as coaches, players and fans envision their team hoisting the National Championship trophy in January. It is the ultimate reward.

UCF Will Never Make the CFP

The University of Central Florida, however, is not one of those teams playing for the National Championship.

Don’t get me wrong, there’s an excess of optimism for the 2019 season in Orlando. Even without star quarterback McKenzie Milton, who will miss (at least) the entire season recovering from that devastating knee injury suffered against South Florida last year. The Knights fully expect to continue their run of excellence from the previous two seasons.

It’s not unreasonable to think they’ll go undefeated in the regular season for a third consecutive year.

Notre Dame transfer Brandon Wimbush is an incomplete but talented quarterback who has seen his share of big games, the offensive line returns 3 out of 5 starters from a year ago, and they have a ridiculous amount of talent at the wide receiver and running back positions.


On the defensive side of the ball the Knights have a veteran and capable secondary, and while they will have to replace a lot of bodies in the front seven, most of the youngsters stepping up are a higher class of recruit than the departed veterans whom they will replace.

No, the reason that UCF isn’t one of those teams has nothing to do with the talent on their roster. It’s because the CFP Selection Committee will never, under any circumstances, put UCF into a four-team playoff – or, as UCF Athletics Director Danny White has taken to calling it, the College Football Invitational.

UCF Has Upset the CFB Powers That Be

UCF has taken a very brash approach to gaining recognition and relevance in the college football landscape. From an aggressive social media campaign to the infamous proclamation of a national championship in 2017 (note: such a proclamation does have a long history in college football, and it is recognized in the NCAA record book) the Knights have raised their profile dramatically in the past few years.

They’ve also made more than a few enemies along the way.

Let’s start with members of the national media. While it’s tempting to write them off as insignificant “talking heads,” the reality is that while they may not have a vote on the committee, their opinions shape the conversations that are had amongst those that can vote. Highly visible media members are highly influential. So, it matters that Kirk Herbstreit derided UCF as “damaging your own brand” after the National Championship declaration and Paul Finebaum called UCF fans “delusional” and described Danny White as “grandstanding” during the 2018 season, just for a couple of examples.

Even if Herbstreit’s view softened somewhat after College Gameday’s visit to UCF’s campus, it’s become clear that many national media members are committed to the view that G5 teams have no business being considered for the CFP.


More importantly than the national media members, however, are the real power brokers of college sports – Power 5 conference commissioners and athletic directors. Let’s just say many of them are not exactly rooting for UCF these days.

Take SEC commissioner Greg Sankey, who said that UCF needs to “look inward” if they want to change their circumstances, comparing UCF’s situation in football to the SEC’s in men’s basketball – a sport where all 365 Division I teams have an on the court path to playing for a national championship. Or consider the nice bit of shade Alabama Athletic Director Greg Byrne threw UCF’s way after Alabama defeated UCF in the 2018 NCAA Women’s Basketball Tournament when he said on Twitter, “Great win today over UCF for @AlabamaWBB!  We’re not ready to make it more than it was and schedule a Disney Parade…but we’ll definitely take it.”

Again, this is merely two examples showing the general attitude those in power have towards UCF.

It’s hard to argue that this attitude has developed for any reason except that UCF hasn’t settled for being a nice but insignificant story The Knights have elected to tirelessly poke and prod at the current system and its beneficiaries.

Good News for Other G5 Contenders

While the committee may never genuinely consider UCF now, that doesn’t mean they wouldn’t consider any Group of 5 team.

The noise made by UCF over the past two years has opened the door for future G5 teams not named UCF to potentially be invited to the CFP. Provided, of course, they put together a perfect season against a strong schedule in a down year for the P5 elite teams.

In fact, the committee might just be more willing to invite a deserving G5 team because UCF has raised the profile, and value, of top G5 teams.


Furthermore, a non-UCF G5 contender is far more likely to be viewed sympathetically simply by virtue of not being UCF. This isn’t to say that the committee would invite a different team just to spite UCF, for there’s far too much money at stake to make a selection simply out of spite. Rather, much in the same way as Boise State raised the value of all G5 programs during the BCS era with their sustained run of excellence, UCF has now done the same for the rest of the G5 here in the CFP era.

Looking at future schedules, there are some teams primed to take advantage of the public pressure UCF has mounted against the CFP selection committee.

In 2019, Houston has non-conference games against Oklahoma and Washington State, along with playing in the strongest G5 conference, The American. Utah State plays at Wake Forest and at LSU, and if Boise State and Fresno State wage strong campaigns, running the table as the Mountain West champ would be a strong resume for the CFP. Speaking of Fresno State, in 2020 they play at Colorado and at Texas A&M.


Similar to Utah State’s situation this year, a strong MWC could set up the Bulldogs to be a part of the CFP conversation next season if they were to run the table.

There are other contenders of course and playing the future schedules game is a bit of a fool’s errand anyway, given how circumstances change year-to-year in college football. The point is that because of UCF’s brash approach, they may have created a situation where another G5 team will be in a sympathetic position should they manage to do what UCF has done, namely, be *really* good at football.

With how good UCF has proven themselves to be, the value of an undefeated season in the G5 has been raised, and the attitude that has cost UCF with the power players in the national landscape has made it possible, however difficult, for a G5 team to be genuinely considered for a playoff spot, sooner rather than later.

As the 2019 college football season gets underway, the UCF Athletics Department should receive a letter that looks something like this:

Dear UCF,
Thanks!
Signed,
The Rest of the G5

Ryan Warner has a passion for college football, and a particular interest in the Group of 5 conferences. He graduated from the University of Central Florida in 2006 and currently lives in Wethersfield, CT.