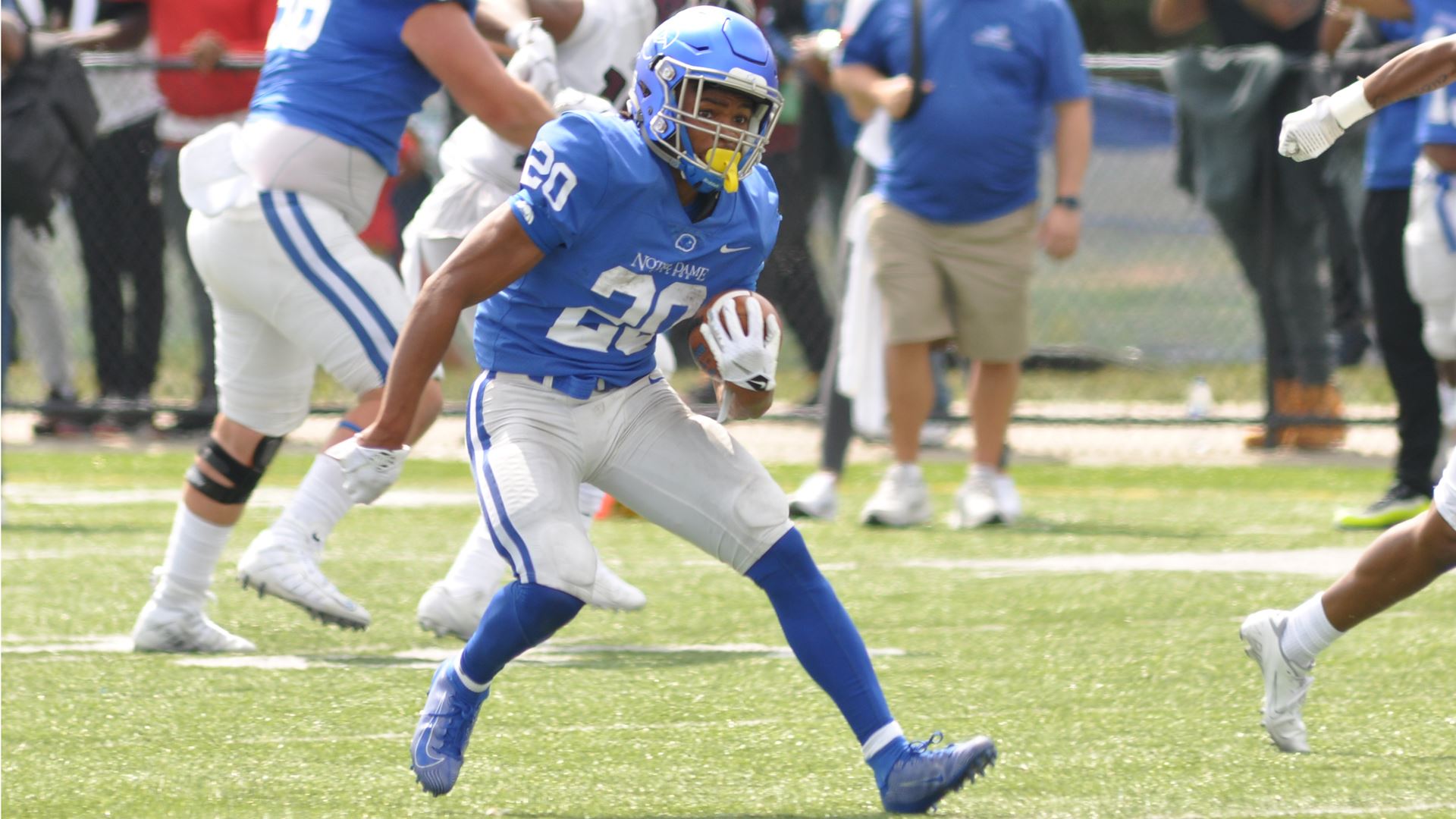 McLaughlin, a 5-9, 175-pound sophomore from Marshville, N.C., rushed for 246 yards on 27 carries and scored five touchdowns as fifth-ranked Notre Dame, exploding for 34 points in the fourth quarter, outscored Fairmont State 61-49.

The diminutive dynamo, whose five touchdowns included a 42-yard dash to the end zone and a 75-yard run in which he wasn’t even touched by a defender, currently leads the NCAA Division II in rushing statistics, averaging 223.3 yards per game, or 8.6 yards per carry, and is on course to break the all-time Div. II rushing record for a single season held by Chadron State’s Danny Woodhead, who rushed for 2,756 yards in 13 games in 2006.  Woodhead, who played nine seasons in the NFL, averaged 212 yards per game in his record-breaking year at Chadron State.


McLaughlin credits Notre Dame’s pugnacious offensive line for his early season success.  “My offensive line is great and I want to thank those guys,” he said modestly after Saturday’s monstrous performance.  “The hole was so big, all I had to do was run forward.  The boys up front work so hard.  That’s why I run as hard as I can because they deserve it.  They deserve everything.”

Slippery Rock’s sensational Roland Rivers III had another outstanding performance on Saturday, throwing for 339 yards and six touchdowns as The Rock (3-0) pounded Millersville 49-0.  The dual-threat quarterback, whose powerful arm and running skills continue to confound defenses, completed 21 of 26 passes and also ran for a team-high 37 yards on six carries in the lopsided victory.

Through three games, the talented Valdosta State transfer has completed a blistering 69 of 90 passes for 1,113 yards and sixteen touchdowns while also rushing for 122 yards and another score.

Central Missouri’s Brook Bolles, a 6-3, 205-pound redshirt senior from Lincoln, Nebraska, also had a huge day on Saturday, throwing for 506 yards and five touchdowns as the No. 21 Mules remained undefeated with a thrilling 48-45 overtime victory at Missouri Western (1-2).

In a game that featured more than 1,200 yards of total offense, Central Missouri led by a staggering 31-0 with 6:39 remaining in the third quarter before the upset-minded Griffons fought back to send the game into overtime.


In other Div. II action this past weekend, reigning national champion Valdosta State (3-0), forcing five turnovers, won its eighteenth game in a row with an impressive 44-27 victory over West Alabama and Truman State (3-0) defeated an FCS opponent for the second time in three weeks with a 38-7 thrashing of Valparaiso on Saturday.

Truman, which upended Drake 10-7 on the road in its season opener, has now won three games against teams from the Div. I Football Championship Subdivision dating back to last season.

In addition to Truman’s two victories, the other Div. II wins over FCS schools — all of which occurred during opening week of Div. II action — include Kentucky State’s 13-7 upset of Robert Morris, Midwestern State’s 33-7 thumping of Northwestern State, East Stroudsburg’s 24-14 win against Wagner in a game the Warriors only trailed for about four minutes, Virginia Union’s 36-17 drubbing of Hampton, and Tarleton State’s stunning 37-26 upset of Stephen F. Austin.