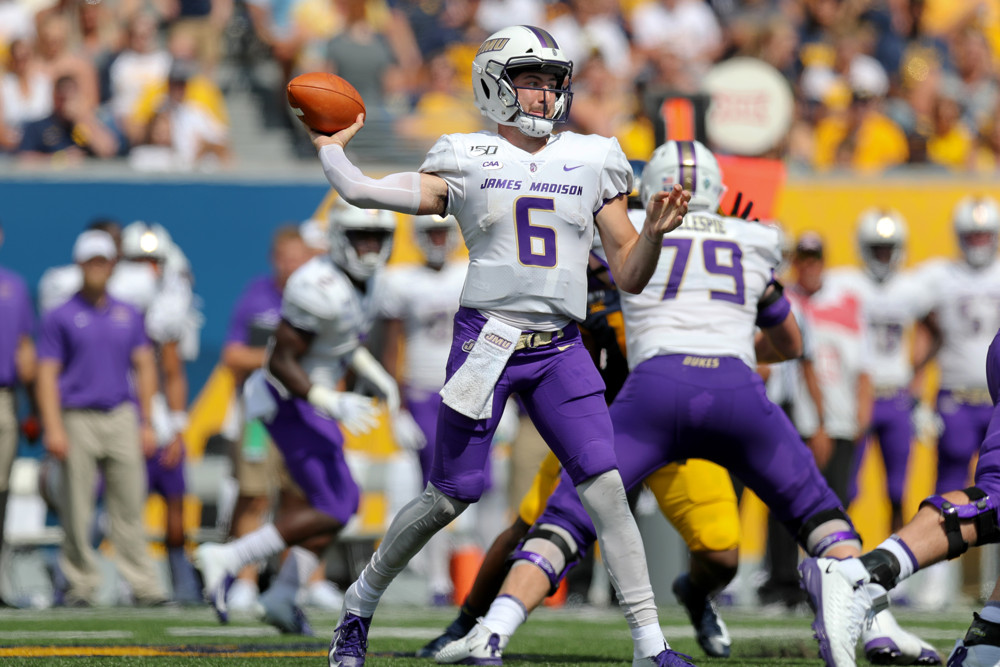 South Dakota State, The Fanatic’s preseason favorite, and defending national champion North Dakota State are still No. 1 and No. 2, respectively, in our weekly FCS Top 25, but James Madison (4-1) might have looked like the most impressive team in the entire Football Championship Subdivision this past weekend in a completely dominating 45-10 rout of Elon.

Here’s a look at our Week 5 FCS national rankings:

John Stiegelmeier’s squad had a bye week before beginning conference play at home against Southern Illinois (2-2) this weekend. The Salukis, who have won only three of the nine contests between the two schools dating back to 2008, including winning twice in Brookings, S.D., are coming off a 41-28 loss at Arkansas State on Sept. 21. South Dakota State, which has reached the FCS playoffs for seven consecutive years — advancing to the semifinals in each of the last two seasons — prevailed 57-38 in last year’s high-scoring encounter in Carbondale.

This Bison also had a week off to prepare for their Missouri Valley Football Conference (MVFC) opener at Illinois State (3-1). Saturday’s game is the first of three potentially difficult conference road games for the defending national champions, who also have to play at South Dakota State and Youngstown State on back-to-back weekends in late October and early November. Following a season opening loss to FBS opponent Northern Illinois, the scrappy Redbirds have won three straight games heading into Saturday’s contest. NDSU won last year’s meeting, defeating Illinois State 28-14 in Fargo.

The Dukes, who gained 336 yards on the ground while scoring six rushing touchdowns — and made it look easy — appeared nearly invincible in Saturday’s 45-10 drubbing of Colonial Athletic Association (CAA) rival Elon. JMU completes its three-game road trip at Stony Brook (4-1) on Saturday. The Seawolves, whose only loss this season came at the hands of Utah State, defeated Rhode Island 31-27 this past weekend when quarterback Tyquell Fields, a redshirt junior from Yonkers, scrambled fifty yards for a touchdown with eleven seconds remaining in the game, capping a dramatic 74-yard game-winning drive. Impressively, it was the sixth time in seven years that Stony Brook began CAA play with a victory.

Jumping out to an early 17-0 lead on a cold and rainy night in Ogden this past weekend before holding off nationally-ranked Northern Iowa 29-17, the Wildcats play at Idaho (2-3) on Saturday in their Big Sky opener. The Vandals, who gave Wyoming everything it could handle two weeks ago in a 21-16 loss in Laramie, fell to Northern Colorado 27-24 this past weekend.

The Grizzlies moved up seven spots with an impressive and resounding 45-20 win at highly-ranked UC Davis on Saturday evening. Montana, whose only loss this season same at FBS powerhouse Oregon, used a balanced offensive attack led by dual-threat quarterback Dalton Sneed, a redshirt senior from Scottsdale, Arizona, to pile up 529 yards in cruising to the road victory. Bobby Hauck’s vastly-improved team hosts Idaho State (2-2) this weekend in its homecoming game.

The Owls had little trouble with Div. II Reinhardt on Saturday, defeating the visiting Eagles 31-7 in a weather-shortened game. KSU has a bye week before hosting Charleston Southern in its Big South opener on Oct. 12.

Pouncing early, Villanova jumped out to a 30-0 lead in downing Maine 33-17 this past weekend. The Wildcats, who have already won three road games this season, travel to Williamsburg, Va., to play William & Mary (2-3) on Saturday. The Tribe have won the last two games in this series, including last year’s 24-17 meeting in Villanova.

Coming off a tough 29-17 loss at Weber State, the Panthers hope to rebound against red-hot Youngstown State on Saturday.

Forcing a pair of fourth quarter turnovers, the pesky Paladins improved to 3-2 with a hard-fought 17-10 win over East Tennessee State on Saturday. Furman plays at Samford (3-2) in an important conference showdown this weekend. Samford, which is 2-0 in the Southern Conference, defeated The Citadel 61-55 in four overtimes this past weekend. It was the second multiple overtime game played by the Bulldogs this season.

Look for the Redbirds to hang tough against reigning national champion North Dakota State on Saturday.

The Fightin’ Blue Hens, who nearly knocked off Pitt this past weekend — taking the Panthers to the wire in a 17-14 setback — remain on the road with a conference game against CAA rival Elon (2-3) on Saturday.

The Aggies, who are better than their record might indicate, look to regroup against North Dakota on Saturday. North Dakota, which put up a decent fight against Eastern Washington this past weekend before succumbing 35-20, defeated Sam Houston State in its last home game on Sept. 21.

The Big Green, who were impressive in a 33-8 stomping of Colgate over the weekend, play Penn (1-1) in Philadelphia on Friday night in their Ivy League opener. The Quakers, who lost a heartbreaker to Delaware in their season opener, defeated Lafayette 28-24 this past weekend.

Despite their 38-0 loss at Florida on Saturday, the Tigers remain in the sixteenth spot. The Tigers have a week off before hosting Albany on Oct. 12.

The Lions struggled a bit on the road against winless Northwestern State, but came away with a 44-27 victory. SE Louisiana plays at McNeese on Saturday.

Having enjoyed a week off after playing at Hawaii, Nathan Brown’s road-weary Bears play at Nicholls (2-2) in a huge Southland Conference game this weekend.

After a disappointing 1-3 start, one gets the feeling that EWU is going be hard to beat the rest of the way. The Eagles play at Sacramento State (2-2) this weekend. Sacramento State, which played Arizona State tough a few weeks ago, fell to FBS Fresno State 34-20 on Saturday.

The Colonels look to rebound against conference rival Central Arkansas after losing to FBS foe Texas State 24-3 this past weekend.

The defending Ivy League champions, who went undefeated last year at 10-0, easily defeated Bucknell 56-23 in a non-conference game last weekend. Princeton quarterback Kevin Davidson has now completed 47 of 58 passes for 722 yards and nine touchdowns on the season. The Tigers host Columbia in their Ivy League opener on Saturday. Princeton’s last loss occurred on Nov. 17, 2017, in a high-scoring 54-44 setback at Dartmouth.

The Aggies walloped Delaware State 37-0 last Thursday and should continue their winning ways when they visit Norfolk State this weekend.

The Blue Devils hope to shake off a heartbreaking 34-29 loss at Eastern Michigan last week when they open Northeast Conference play at Sacred Heart (3-1) on Saturday. Look for a genuine three-way battle between CCSU, Duquesne and Sacred Heart to take shape in the NEC.

Following a 23-6 win over Duquesne in its nonconference finale, look for New Hampshire to be a contender in the highly-competitive CAA.

Don’t count the Seawolves out in the battle for the Colonial Athletic Association title.