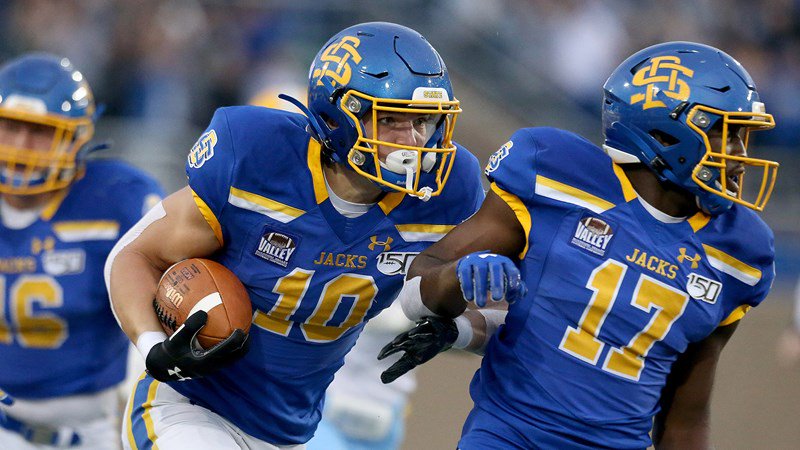 With this season’s second week of action in the books, let’s take a look at where the best teams stand in our weekly FCS Top 25.

South Dakota State, The Fanatic’s preseason favorite in the Football Championship Subdivision (FCS), completely dominated Division I newcomer Long Island, limiting the Sharks to just 52 yards on the ground on 32 carries and 123 yards of total offense in a 38-3 rout in Brookings, S. D., on Saturday.  The Jackrabbits take on winless Drake (0-2) this weekend. Drake came up on the short end of a 10-7 defensive struggle on Saturday against visiting Truman State — a Div. II team that always plays the Bulldogs tough.

With two impressive early season wins under its belt, defending national champion North Dakota State, which pounded archrival North Dakota 38-7 in Fargo on Saturday, faces its first serious test of the season when the Bison play Delaware (2-0) on the road this weekend.  North Dakota State won its only previous meeting against Delaware, defeating the Blue Hens 38-10 in Fargo last September.

James Madison, which nearly upset West Virginia in Morgantown in its season opener, improved to 1-1 with a 44-7 spanking of St. Francis (Pa.) in Harrisonburg, Va., on Saturday.  JMU’s balanced offensive attack, led by redshirt senior quarterback Ben DiNucci, and its solid defensive unit, anchored by redshirt senior defensive lineman Ron’Dell Carter, a Rutgers transfer, should be too much for visiting Morgan State (0-1) of the MEAC this weekend.  Yielding a breathtaking 620 yards while gaining only 70 yards themselves, the outmanned Bears were pounded 46-3 at FBS Bowling Green in late August in their only previous game this season and — despite a week’s rest — are likely to suffer the same fate again this weekend against one of the best teams in the FCS.

UC Davis (1-1) snapped the University of San Diego’s twenty-one game home winning streak — the longest active streak in the FCS — with a thrilling 38-35 road win on Saturday.  Playing at home for the first time this season, the Aggies should have little trouble this weekend against the Patriot League’s winless Lehigh Mountain Hawks, a team licking its wounds after being routed by Villanova on Saturday, in a tune up for their huge game at undefeated North Dakota State on Sept. 21.

A week after being shutout while going toe-to-toe with San Diego State in a 6-0 defensive struggle, Weber State’s Josh Davis, a 2018 Jerry Rice Award recipient as a freshman, rushed for 129 yards and two touchdowns as the Wildcats, clicking on all cylinders, routed Cal Poly 41-24 on Saturday.  Look for sixth-year coach Jay Hill’s squad to give Nevada — its second FBS foe in three weeks — all it can handle this weekend.

A week after nearly knocking off 25th-ranked Iowa State in overtime, quarterback Will McElvain, who tossed three touchdown passes, looked impressive as Northern Iowa routed Southern Utah 34-14 in Cedar Falls on Saturday.  The Panthers have a bye week before hosting Idaho State on Sept. 21.

Two late field goals, including a dramatic 43-yarder in overtime, denied Kennesaw State its first win ever against an FBS opponent on Saturday when the Owls dropped a heartbreaking 26-23 overtime contest to Kent State.  Look for Kennesaw State, which has won four of its last five road games, to return to its winning ways against a potentially dangerous Alabama State team that took UAB to the wire in a 6 p.m. game in Montgomery on Saturday.

The explosive Eagles piled up a program record 769 yards in crushing Div. II Lindenwood 59-31 over the weekend and can be expected to continue their offensive fireworks when they travel to Alabama to play nationally-ranked Jacksonville State — a 41-20 winner against Chattanooga — on Saturday in what promises to be a high-scoring affair.

Mark Ferrante’s Wildcats continued to impress this past weekend in a 38-10 rout of Lehigh and should win their third consecutive game on Saturday when they play at Bucknell.

Florida Atlantic transfer Daniel Parr threw for two touchdowns and Walter Payton Award contender A. J. Hines ran for two more as Duquesne routed Div. II Walsh University 44-3 in its season opener on Saturday, but the Dukes will face their first real test this weekend when they travel to neighboring Ohio to take on previously unranked Youngstown State (2-0), arguably one of the most improved teams in the country.

Tom Flacco, the younger brother of the NFL’s Joe Flacco, threw three touchdown passes and ran for another as Towson (2-0) clobbered North Carolina Central 42-3 on Saturday for its second straight victory.  Despite a promising start, the Tigers have three tough games in a row, beginning with a very difficult CAA road game against Maine on Saturday, followed by a home contest against vastly-improved Villanova on Sept. 21 and a trip to the “Swamp” to take on the nationally-ranked Florida Gators on Sept. 28.

JSU rebounded from its surprising season opening loss to Southeastern Louisiana with a convincing 41-20 win over Chattanooga on Saturday.  The Gamecocks can make a huge statement when they host explosive Eastern Washington this weekend.

The Grizzlies have looked impressive in a 31-17 win at South Dakota and a 61-17 shellacking of North Alabama, but will almost certainly suffer their first loss of the season when they travel to Eugene, Oregon, to take on Heisman hopeful Justin Herbert and the Oregon Ducks at Autzen Stadium on Saturday night.  Unfortunately for the Griz, as Nevada found out in a 77-6 pummeling this past weekend, the Ducks appear to be in no mood to take prisoners after a costly season opening loss to Auburn.

Look for the defensive-minded Black Bears to give Towson all kinds of fits on Saturday after a tough 26-18 loss at Georgia Southern.

Doggedly determined Furman, a legitimate Southern Conference contender, built a 17-point lead against sky-high Georgia State, a team that had knocked off the SEC’s Tennessee Vols a week earlier, before falling to the FBS Panthers 48-42 in overtime on Saturday.  The road doesn’t get any easier for the Paladins this week as they face Virginia Tech of the ACC, but look for them to get back on the winning side against conference rival Mercer the following week.

UCA remained perfect with a 24-16 victory at Austin Peay and should make it three in a row when they host Abilene Christian (1-1) — a 66-14 winner this past weekend against NAIA Arizona Christian — in their home opener on Saturday.

Coming off a triple overtime win at Rhode Island — the 700th win in program history — the undefeated Blue Hens have a chance to make some serious noise nationally when they host defending national champion North Dakota State on Saturday.

After a season opening loss at Texas Tech, the Bobcats had little trouble disposing of a fairly solid Southeast Missouri State team in Bozeman over the weekend.  Look for Montana State to win easily at Western Illinois (0-2) — a team they struggled with a year ago — on Saturday.

ISU had no trouble in a 42-14 trouncing of Morehead State this past weekend and should stay on the winning path at Eastern Illinois (0-2) on Saturday.  The Redbirds defeated the Panthers by 38 points in 2018.

After a bye week, Southland Conference favorite Nicholls hosts Prairie View A&M.  Look for the Colonels to win big in that one.

After a disappointing 4-7 season in 2018, Bo Pelini’s Penguins — the FCS national runner-up in 2016 — may be the most improved team in the entire Football Championship Subdivision at this early stage with impressive wins against Samford and Howard University, games in which YSU scored a combined 99 points.  This weekend’s matchup with Jerry Schmitt’s Duquesne Dukes will tell us a lot about both teams.

With two relatively easy road wins — a 49-27 victory at Western Carolina and a 45-7 pounding of Presbyterian — the Bears can make it three in a row when they host Austin Peay this weekend.

SE Louisiana’s game against Bethune-Cookman on Saturday was cancelled due to Hurricane Dorian, so it might be another couple of weeks before the Lions win their second game of the season since they have to play at Ole Miss on Saturday and then host a pretty good Lamar team the following week.

Lamar’s unblemished record will be in serious danger this weekend when the Cardinals travel to College Station to take on powerful Texas A&M, a team smarting from a two-touchdown loss at top-ranked Clemson.

Opening their season on the road, the Flyers stunned previously ranked Indiana State 42-35 in Terre Haute.  The unexpected loss knocked the winless Sycamores (0-2) out of The Fanatic’s Top 25.  Dayton should have little trouble against Robert Morris in Pittsburgh this weekend.