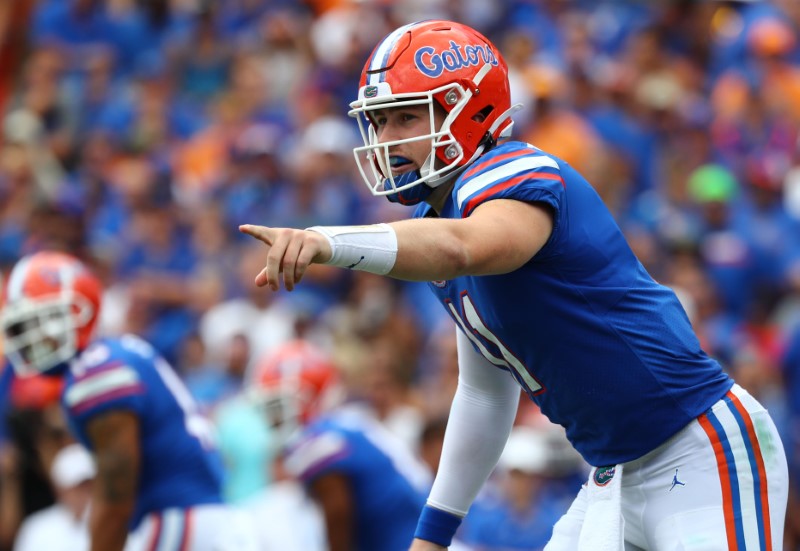 Florida quarterback Kyle Trask made the most of his first start in seven years, passing for 293 yards and two touchdowns as the No. 9 Gators rolled to a 34-3 win over the Tennessee Volunteers in Gainesville, Fla., on Saturday.

Trask, a redshirt junior whose last start was as a freshman at Texas’ Manvel High School in 2012, finished 20-of-28 passing and threw scores to tight end Kyle Pitts and wide receiver Freddie Swain.

Lamical Perine rushed for a game-high 62 yards on 14 carries while Swain notched 67 yards on three catches.

The Gators (4-0, 2-0 SEC) forced four turnovers against their SEC East foe – three interceptions and a fumble.

Florida has won three straight over Tennessee and 14 of the past 15 meetings.


Vols junior quarterback Jarrett Guarantano completed 10 of 17 pass attempts for 107 yards but tossed a pair of first-half interceptions and was replaced by freshman Brian Maurer for much of the second half.

Trask and the Gators’ offense started fast, moving 75 yards in five plays and scoring when he found Pitts for a 19-yard TD and a 7-0 lead just over two minutes into the game.

The Vols wasted a chance to score after recovering a fumble at the Florida 19. Jennings had a pass go through his hands in the end zone, and Florida’s Trey Dean III made a diving interception off the bounce.

Marco Wilson’s interception of Guarantano early in the second quarter led to a 41-yard drive that ended with Evan McPherson booting a 22-yard field with 10:02 left in the first half for a 10-0 lead.

After being replaced by Emory Jones for a series, Trask returned and guided the Gators on a 9-play, 61-yard drive that culminated with Perine’s fourth-down plunge from the 1 on the half’s last play, and the Gators ran off Florida Field with a 17-0 advantage.

Maurer opened the second half by efficiently moving the Vols into Florida territory on the first drive, and Brent Cimaglia’s 40-yard field goal at 11:24 put the visitors on the board.

Trask went over the top for a 29-yard scoring strike to Swain just over two minutes later for a 24-3 lead.

Dameon Pierce rushed for a 10-yard score with 11:31 left in the fourth quarter and McPherson later added a 37-yard field goal.