Georgia State on top of the world, at least for one week 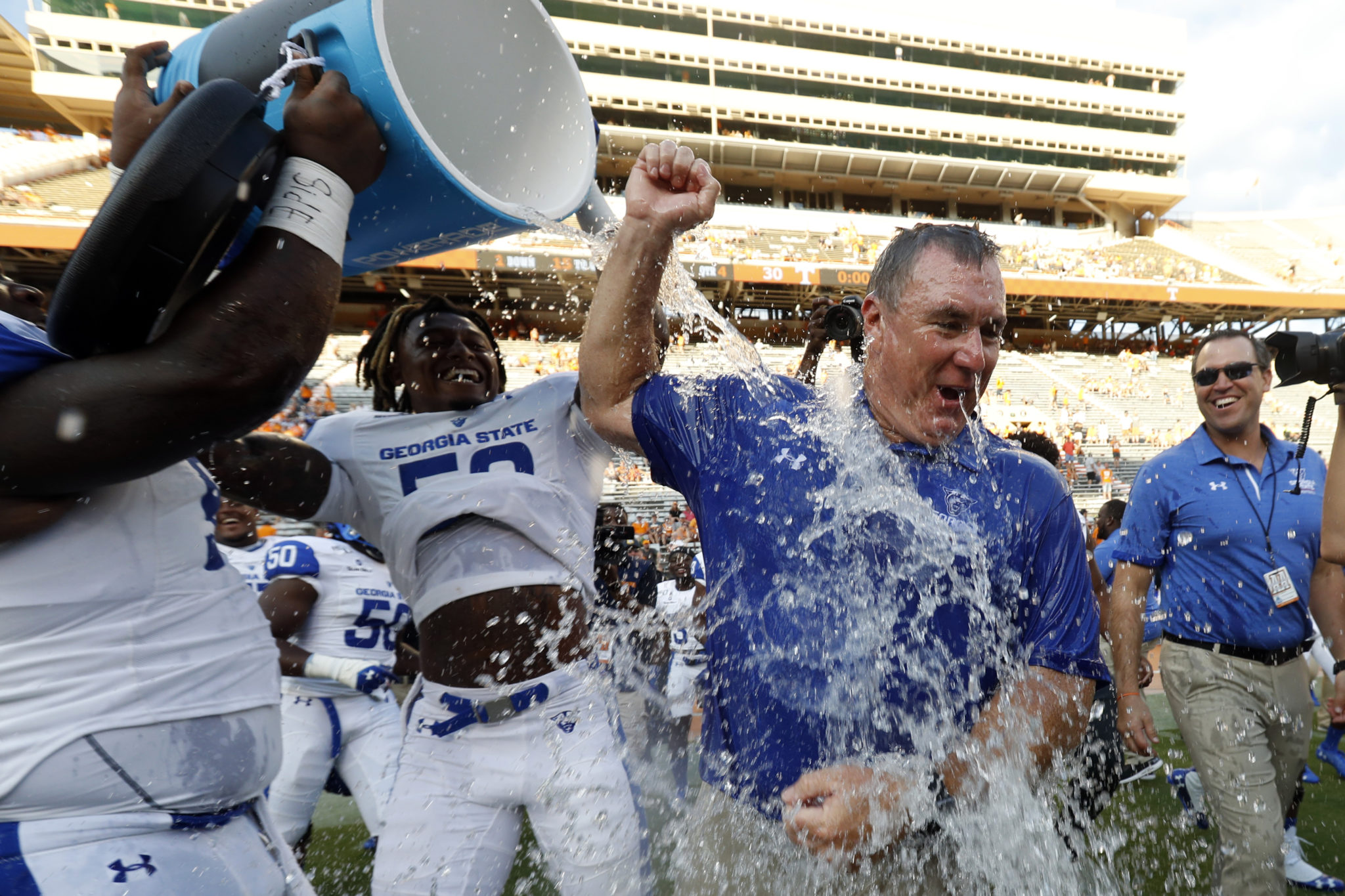 ATLANTA — Let’s face it: When the school on your diploma is Georgia State, you don’t get a lot of chances to brag about your alma mater’s athletic prowess.

When others are talking football, you’re pointing to enrollment figures (yeah, your team is pretty good, but we’ve got more students!).

So, this past week has been a bit of a culture shock after the Panthers’ stunning upset of Tennessee.

The emails. The tweets. The Facebook posts. All of them, congratulating me (Class of 1985).

Maybe you can relate if you’re one of the many who did not graduate from the Alabamas, Oklahomas or Ohio States of the world.

Last weekend, you may have heard, the Panthers pulled off one of the biggest triumphs in school history (admittedly, a very short list) when they knocked off mighty Tennessee (OK, that description is a bit dated) on the hallowed, checkered turf of Neyland Stadium.

Suddenly, everyone was gushing over this university that takes up a large swath of downtown Atlanta but goes largely unnoticed in a city that is focused on the Braves and the Falcons, the Hawks and Atlanta United, the University of Georgia and Georgia Tech.

“We’ve got people curious about what we’re doing,” Cobb said. “Now, we’ve got to sustain that.”

To be fair, there have been other storied moments in Georgia State’s athletic history.

Two, to be exact.

Back in 2001, the men’s basketball team coached by Lefty Driesell knocked off third-seeded Wisconsin by a single point in the opening round of the NCAA Tournament.

Then, in 2015, the Panthers pulled off a similar upset against Baylor when R.J. Hunter hit a 3-pointer that capped a remarkable comeback and sent his father, then-coach Ron Hunter, tumbling off his stool along the sideline.

Now, we have a third.


The football program, entering the 10th season of its largely forgettable existence, beat a Power Five school for the first time.

Never mind that Tennessee has largely fallen off the map the last dozen years, going through seven coaches while winning just 28 of its last 88 games in the Southeastern Conference.

We prefer to focus on the Vols capturing two Associated Press national titles (most recently in 1998) and winning more than 800 games since starting their football team in 1902 (more than decade before Georgia State was even founded as a night school going by this catchy moniker: Georgia School of Technology’s Evening School of Commerce).

Compare Tennessee with the Panthers’ football resume: a 30-77 record since the program was founded in 2010, with only two winning seasons. A year ago, they went 2-10 and finished dead last in the Sun Belt Conference.

Yet, when the horn sounded, Georgia State was celebrating a 38-30 victory it thoroughly deserved.

And it’s been a party ever since.

Coach Shawn Elliott has gotten interview requests from around the country. The Panthers were named Reveal Suits National Team of the Week (whatever that is) by the Football Writers Association of America. A university truck with a video board on the side panels has been riding around downtown Atlanta showing highlights of the Tennessee game.


Cobb was quick to point out that Georgia State wasn’t trolling the Vols. The truck has actually been making the rounds for several weeks, all part of a marketing effort to drum up support for the program.

Of course, now it’s getting noticed.

“We have a story to tell,” Cobb said. “We’ve got to capture every opportunity we can to tell that story.”

Georgia State, which has one of the nation’s largest enrollments with more than 50,000 students, has worked hard to change its image as primarily a commuter school that doesn’t give a hoot about athletics. New dorms keep going up. When the Braves moved to a new stadium in the suburbs a few years ago, Georgia State purchased Turner Field and converted it to their new football home. There are plans for a new basketball arena, as well.

But it’s tough to get people interested, with so little sporting success and so many other options in the A-T-L.

The basketball team has struggled to draw fans, even while making the NCAAs three of three of the last five years.

Not many people even know — or care — who Georgia State plays next on the gridiron (for the record, it’s FCS school Furman in the home opener Saturday night).

A single victory won’t change that.

“We can’t be one-hit wonders,” Cobb said. “People gravitate to success and teams that win. If we can put a program in place that plays a fun, exciting style of game — and wins — we’re going to have people jumping on the bandwagon.”

Believe me, there’s plenty of room.