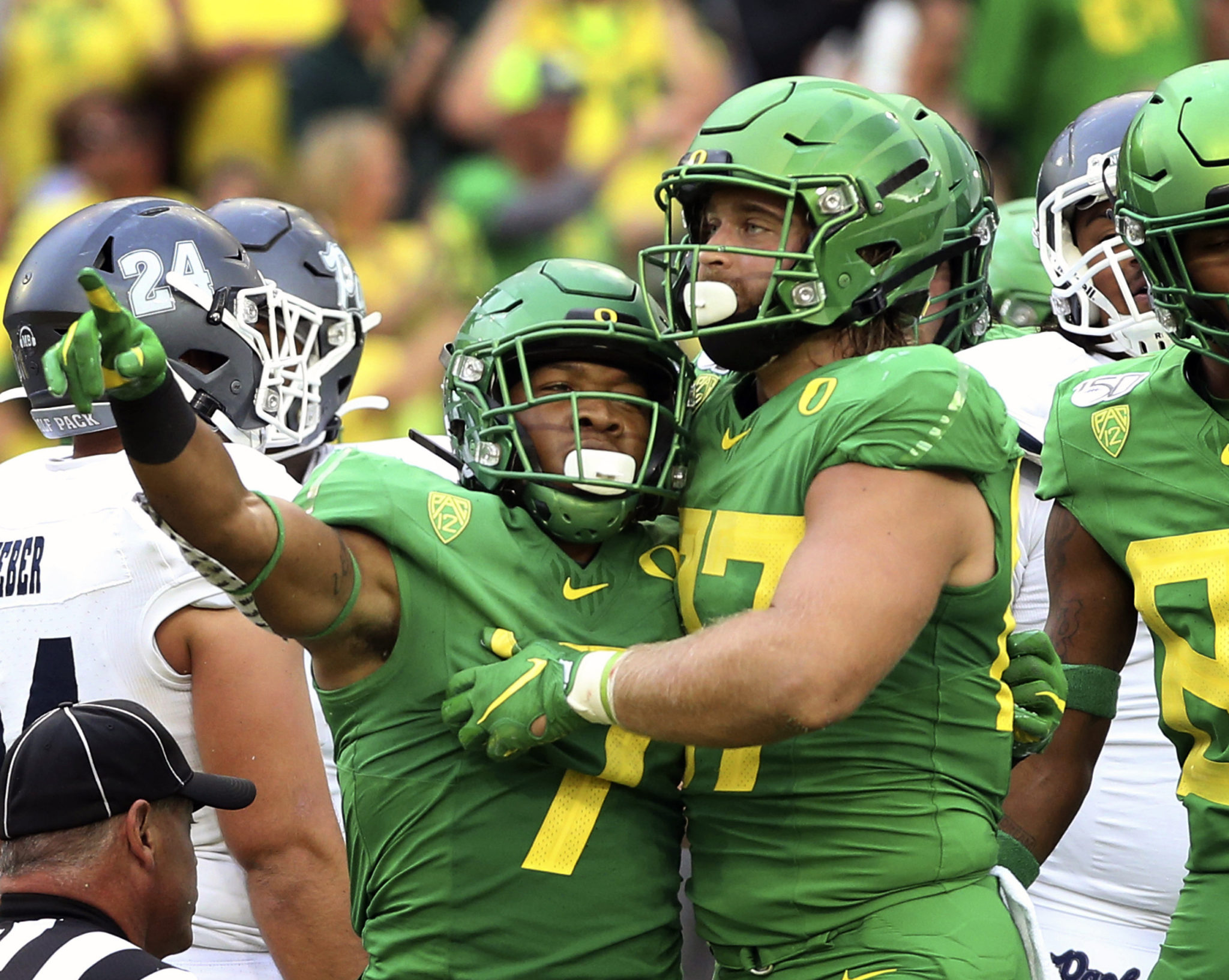 EUGENE, Ore. — Justin Herbert threw for 310 yards and five touchdowns before heading to the sideline in the third quarter, and No. 16 Oregon rebounded from its season-opening loss to Auburn with a 77-6 rout of Nevada on Saturday night.

The Ducks (1-1) have won 15 straight home openers and 24 straight over nonconference foes at Autzen Stadium. Oregon tied a school record with seven touchdown passes — caught by seven receivers. The Ducks also tied their record for points at Autzen.

True freshman Brandon Talton kicked a pair of first-half field goals for Nevada (1-1). The Wolf Pack were coming off a 34-31 victory over Purdue last week, just the team’s second ever win over a Big Ten program.


Redshirt freshman Carson Strong, who threw for 295 yards and three touchdowns in his debut, threw for 89 against the Ducks and was intercepted twice.

The Ducks were coming off a 27-21 loss to Auburn in the team’s high-profile season opener in Texas. Bo Nix threw a 26-yard touchdown pass to Seth Williams with 9 seconds remaining to give the Tigers the victory. Herbert finished with 242 yards passing a touchdown.

Talton’s 24-yard field goal gave Nevada the early lead midway through the opening quarter. Talton, a walk-on, kicked a 56-yard field goal as time ran out for the victory over Purdue, earning the game ball and a scholarship.

Herbert hit Breeland with a 66-yard scoring pass on the ensuing drive to put the Ducks in front. Herbert has thrown a touchdown pass in 30 straight games, the longest active streak in the nation.

But the senior quarterback has had to deal with a depleted receiver corps because of injuries heading into the season. Graduate transfer Juwan Johnson, a projected starter, was on the sidelines for the second straight game with an unspecified injury.


Talton added a 45-yard field goal for the Wolf Pack before CJ Verdell muscled his way into the end zone from 2 yards out to give the Oregon a 14-6 lead. After Sampson Niu intercepted Strong, Oregon scored two plays later on Herbert’s 16-yard pass to Ryan Bay

The game further slipped away from Nevada when Oregon took over on the Wolf Pack 7 after a muffed punt, and Herbert found Brady Aiello with a 1-yard scoring pass to make it 28-6.

Herbert threw his fourth touchdown of the game before the end of the first half, a 24-yard pass to a wide-open Bryan Addison in the end zone. He added another in the third quarter to Daewood Davis, recently moved to receiver from cornerback because of the injuries, and Cyrus Habibi-Likio ran for an 11-yard TD to extend the lead to 49-6.

Redshirt freshman Tyler Shough replaced Herbert with about eight minutes left in the third quarter and threw a 7-yard touchdown pass to Jaylon Redd. Shough added a 21-yard TD pass to Hunter Kampmoyer and Darrian Felix added a 62-yard in the final quarter.

The Ducks lead the series 7-1. The Wolf Pack’s only victory came in the first meeting between the two teams in 1947.

Oregon: Herbert threw six touchdowns in a game against Cal when he was a freshman. Freshman outside linebacker Mace Funa had his first career sack in the second quarter. He added another sack in the fourth. … Minnesota Timberwolves forward Jordan Bell, a former Duck, was at the game, as was former receiver Keanon Lowe, who tackled an armed student earlier this year at the Portland high school where he now coaches. … Oregon scored on eight straight drives. … Oregon also scored 77 points at home in 2017 against Southern Utah.