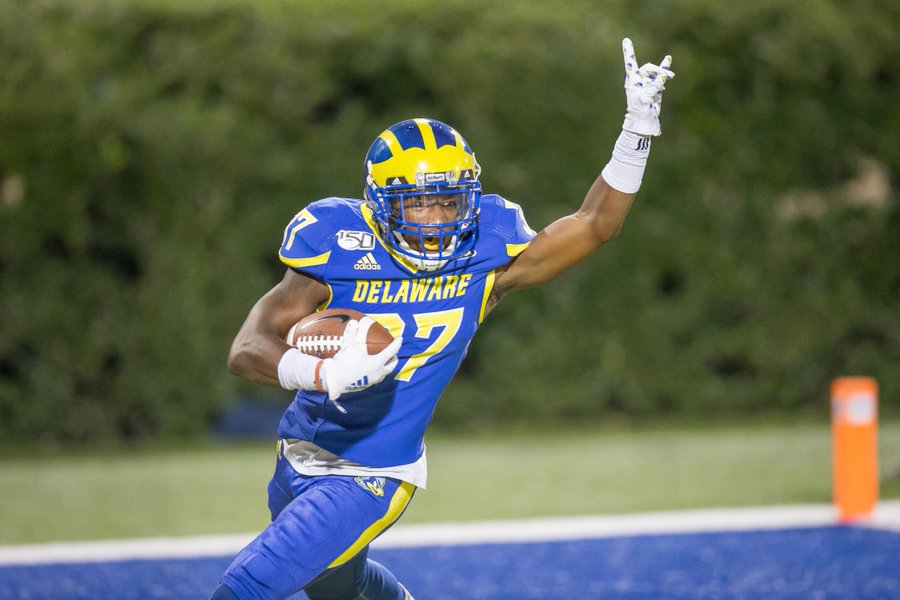 Returning the Fightin’ Blue Hens to their former glory as a national collegiate power was on everybody’s mind as ex-Richmond mentor Danny Rocco was named the 23rd head coach at the University of Delaware in December 2016.

“I have always had an appreciation for the history and tradition of Delaware football and I am highly motivated to return Delaware to its winning ways and to a position of national prominence,” Rocco told a jam-packed audience at the Bob Carpenter Center Auditorium moments after being introduced at a welcoming ceremony by university president Dennis Assanis and Chrissi Rawak, the school’s Director of Athletics and Recreation Services.

Rocco was a perfect match for a school noted for its winning tradition on the gridiron and where the fans and alumni take football seriously.

A longtime national power in earlier years at the Div. II level, the Blue Hens also won a national title in 1979 and played in three other championship games under legendary head coach Tubby Raymond, who won 300 games while losing only 119 and playing to a tie twice between 1966 and his retirement following the 2001 season.

It’s a storied history, unmatched by most schools at the FCS level.

Prior to being named head coach at Delaware, the 59-year-old Rocco had been named the Big South Conference Coach of the Year on four occasions while at Liberty University where he took over a struggling 1-10 team in 2005 and won 47 of 67 contests while capturing four conference championships over the next six seasons before moving on to Richmond, where, inheriting a 3-8 squad, he quickly returned the Spiders to national prominence in his five years at the helm.


Like Delaware, Richmond is also a member of the Colonial Athletic Association (CAA).

While at Richmond, Rocco’s teams defeated nationally ranked FCS opponents on no fewer than fourteen occasions and made three consecutive FCS Playoff appearances.

Moreover, Rocco has never had a losing season in thirteen years as a head coach.

Inheriting a team that finished with back-to-back 4-7 marks in 2015 and 2016 and which had only one winning season since 2011, Rocco immediately set Delaware on a winning course, leading the Blue Hens to a 7-4 record in his inaugural season and a 7-5 mark last year, including an FCS Playoff appearance for the first time in eight seasons.

This year — the first season where a majority of his players are ones that he personally recruited — Rocco’s team is off to a quick 2-0 start with a 31-13 opening season win against Delaware State in the “Route 1 Rivalry” — a series dominated by the Blue Hens — and last weekend’s thrilling 44-38 triple-overtime victory at Rhode Island.


Delaware is currently tied with Montana at No. 18 in this week’s FCS Coaches Poll and slightly higher — at seventeen — in The Fanatic’s weekly Top 25.

Saturday’s game against two-time defending national champion North Dakota State, which has won the FCS title in seven of the previous eight years, could be a defining one for Coach Rocco and Delaware’s return to national prominence.

The two teams clashed last year at the Fargodome in North Dakota with the Bison winning 38-10.  It was the first meeting ever between the two schools.

In that game, NDSU dominated both offensively and defensively, piling up 527 total yards to Delaware’s 152.  The game, moreover, was never in doubt as NDSU jumped out to a commanding 28-0 first-quarter lead.  Trailing 38-3, the Blue Hens didn’t score a touchdown until there was only 1:52 remaining in the game — and that came on a 92-yard fumble recovery.

Rocco was deeply disappointed by his team’s performance last year, saying after the game that the one-sided outcome was “what happens when you play poorly and don’t execute the game-plan against a really good opponent.  They jumped on us early and we never were able to really execute in any of the three facets of the football game.”

Rocco realizes that he’ll need a much better effort from his players this time if the Blue Hens hope to end North Dakota State’s twenty-three game winning streak, the fifth-longest winning streak in FCS history.


Playing in the East for the first time since 2006 and for only the sixth time in program history, North Dakota State isn’t taking Saturday’s game lightly.  They never take anybody lightly.

“You can go up and down the teams in their league and they’ve all had their run of success,” said first-year coach Matt Entz. “It’s going to be a huge challenge for us to go out there and win at their place.”

Like Delaware, North Dakota State is also 2-0, posting relatively easy 57-10 and 38-7 wins over Butler and North Dakota, respectively.  Saturday’s game is the first of four consecutive contests the Bison will be playing against nationally-ranked teams.

Delaware fans have been eagerly awaiting this contest all summer and the place is likely to be packed.

Delaware, in fact, always draws a large crowd at Tubby Raymond Stadium in Newark, which has a seating capacity of 16,730.  It’s often near capacity, regardless of the opponent, as was the case in this year’s season opener against Delaware State when the Blue Hens drew a crowd of 15,894 — impressive attendance numbers for any school in the Football Championship Subdivision.

Under Rocco’s stewardship, Delaware is indeed returning to national prominence.  An upset victory on Saturday will only make the inevitable happen sooner than most longtime fans and alumni expected.