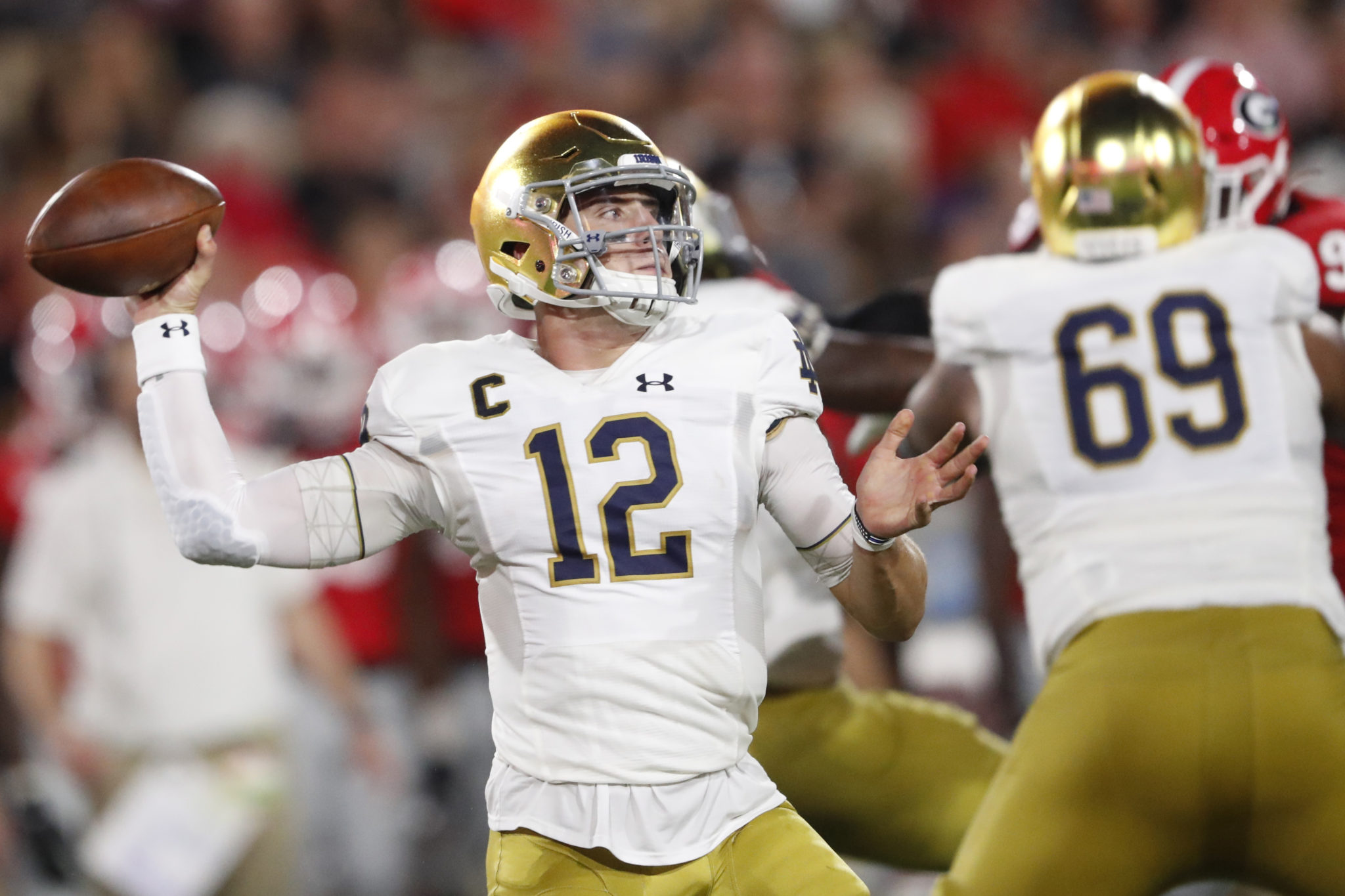 There is no margin for error now for Notre Dame.

Coming off a 23-17 loss at Georgia that silenced many doubters, the Fighting Irish (2-1) find themselves in must-win mode every week going forward if they want to climb back into the discussion for the College Football Playoff. The task begins Saturday at home against Virginia (4-0).

“This is an opportunity to kind of define who you are,” Notre Dame coach Brian Kelly said of his players. “Clearly, they know what’s at stake for them, they’re playing a really good football team that’s nationally ranked. Virginia has their attention.”

It should. Already atop the ACC’s Coastal Division at 2-0 thanks to comeback victories over Pitt and Florida State, Virginia is coming off another game where it fell behind. Old Dominion scored the first 17 points of the game before Virginia answered with 28 consecutive points.

The Cavaliers’ 3-4 defense is the national co-leader with Florida with 20 quarterback sacks and ranked No. 14 with 263.8 yards allowed, including just 75 yards on the ground, certainly no relief for a Notre Dame team that had only 46 rushing yards against Georgia a week ago. Virginia’s linebackers are an active bunch: 6-foot 7, 235-pounder Charles Snowden had 15 tackles and two sacks last week while Zane Zandler returned an interception for a touchdown and Matt Gahm and Jordan Mack added another 19 tackles.

“(Perkins) is explosive . extremely dangerous with the ball in his hands,” Kelly said. “It’s a really good defense . schematically sound . a great challenge for our football team.”

Bronco Mendenhall, whose BYU teams lost three times and twice to Kelly at Notre Dame Stadium, knows what to expect even though this Irish team, led by junior quarterback Ian Book, is averaging 300.7 passing yards and 39.3 points despite the results against the Bulldogs.

“Numbers are misleading sometimes,” Mendenhall said. “I think they’re strong offensively . and I’ve seen the ball consistently being moved when they want to run it against whomever they play.”

Because of Notre Dame’s scheduling agreement with the ACC, the two teams are scheduled to meet seven times between 2021 and 2035. The Irish lead the young series 2-0: 36-13 in the 1989 Kickoff Classic at the Meadowlands in New Jersey and 34-27 at Virginia in 2015 on DeShone Kizer’s 39-yard TD pass to Will Fuller with 12 seconds remaining.

With Jafar Armstrong out following abdominal surgery, senior Tony Jones Jr. (148 yards) and Book (145) have handled the running load for Notre Dame. They should get some help from the return of sophomore Jahmir Smith, who had two TDs against Louisville but then suffered a turf toe injury. Junior Avery Davis, sophomore C’Bo Flemister and freshman Kyren Williams could get more touches as well.

Perkins (193 yards) and sophomore Wayne Taulapapa (152 yards, five TDs) are the only Cavaliers over the century mark on the ground through four games.

(NOT SO) WARM FEELINGS

The forecast for Saturday is rain, thunderstorms and a high temperature of 71 degrees, a lot different than the last time Mendenhall coached in South Bend. On Nov. 23, 2013, the wind chill was 11 degrees when his BYU Cougars suffered a 23-13 loss to Kelly’s Irish.

“You know I don’t remember much about being there . other than it was the coldest I’ve ever been,” said Mendenhall, a native of Alpine, Utah. “I looked over one time . and (Kelly) was seated on the bench on one of those heaters. I was like, ‘Wait, is that legal for the head coach? Can you?'”

The Cavaliers will be trying to post the ACC’s first win against a ranked Irish team in Notre Dame Stadium. Notre Dame is 20-0 at home against ACC foes.

“Going out there we have an opportunity to put our mark on college football, do all the things that we said we came here to do and just come out there from the start and just play aggressive,” Perkins said.

Maybe the most emotional of Notre Dame’s seven captains, safety Jalen Elliott is one of three players who played their high school football in Virginia. As a quarterback, Elliott helped Lloyd C. Bird High School in Richmond to state championships in 2013 and 2014. Prior to practice this week, the captains held a players-only meeting.

“We can’t dwell on the past or look into the future,” said Elliott, who has an interception and two passes broken up this season. “We have to be ready for a very good Virginia team.”