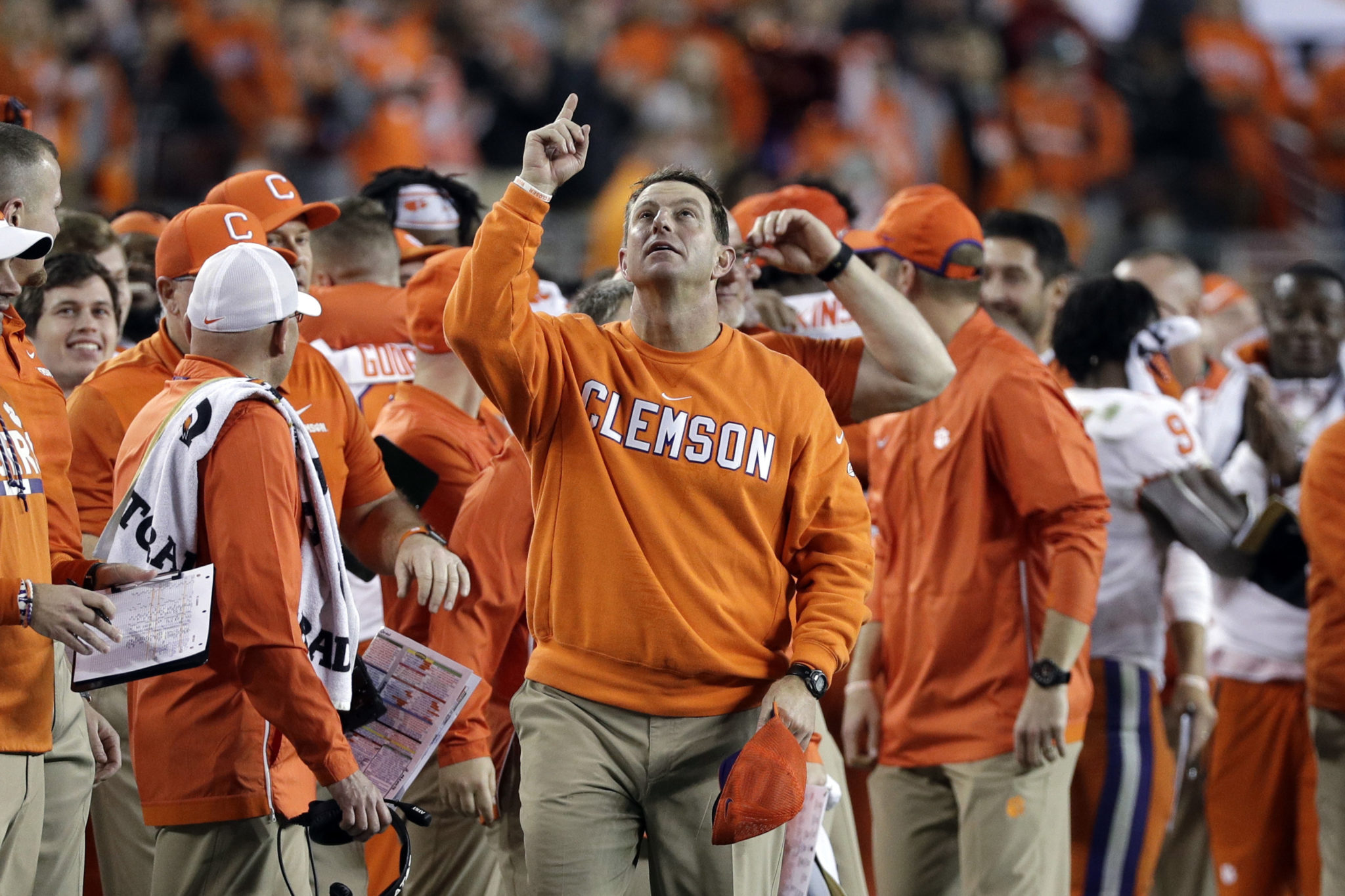 Top-ranked Clemson once again received all six first-place votes in The Fanatic’s weekly Top 25 and remains king of the hill after defeating Texas A&M 24-10 on Saturday while newcomers Maryland, North Carolina, USC and Virginia join this week’s rankings for this first time this season.  Virginia and Washington are tied at No. 23 in our latest poll.

Here are this week’s rankings with total votes in parentheses.

After dominating Texas A&M both offensively and defensively this past weekend, the top-ranked Tigers head to a sold-out Carrier Dome — the Dome’s first sellout in nearly two decades — in their first road game of the season to take on shell-shocked Syracuse, a team that still doesn’t know what hit them in a completely unexpected 63-20 stomping at the hands of surprising Maryland this past weekend.  The Orange played Clemson extremely tough last season, losing to the Tigers 27-23 on the road in late September.  A two-yard touchdown plunge by running back Travis Etienne in the game’s closing minute was the difference in that heart-stopper.

As was the case in the season opener in Atlanta against Duke, Nick Saban’s squad had little trouble this past weekend in routing New Mexico State 62-10.  Like Clemson, the Crimson Tide face their first true road test of the season on Saturday when they travel to Columbia, S. C., to play South Carolina (1-1).  The Gamecocks, who squandered an 11-point fourth quarter lead in a 24-20 seasoning opening loss to Mack Brown’s vastly-improved North Carolina Tar Heels, tuned up for this weekend’s big game by whipping outmanned Charleston Southern 72-10 on Saturday.

The Bulldogs remain in the third spot in our weekly poll following a 63-17 rout of visiting Murray State.  Georgia will get ready for its huge Sept. 21 showdown with Notre Dame by tuning up against the Red Wolves of Arkansas State (1-1), a member of the Sun Belt Conference, at Sanford Stadium in Athens at noon on Saturday.

The Buckeyes looked about as dominant as a team possibly could in totally dismantling a scrappy Cincinnati team 42-0 last Saturday.  Ohio State plays its first Big Ten contest this weekend when it faces undefeated Indiana (2-0) on the road.  Indiana, which hasn’t won a Big Ten title since 1967 — a year the fourth-ranked Hoosiers tied for the conference championship with Minnesota and Purdue — is coming off an easy 52-0 victory against Eastern Illinois, a member of the FCS Ohio Valley Conference.

The Sooners, who almost effortlessly put 70 points on the board against visiting South Dakota this past weekend, travel to Los Angeles to take on winless UCLA on Saturday evening.  The Bruins, who are much better than their 0-2 mark might indicate, have kept their two losses close, both within ten points — losing at Cincinnati 24-14 in their season opener and dropping a 23-14 game at home against San Diego State this past Saturday — but could have trouble keeping their high-octane visitors from blowing the game wide open.

While Texas might not actually be quite as good as all of the preseason hype, LSU’s hard-fought 45-38 road victory over the Longhorns was impressive nonetheless.  The Tigers get something of a breather this weekend when they host winless Northwestern State (0-2), a struggling squad coming off an embarrassing 33-7 loss at home to Div. II Midwestern State.

The Fighting Irish had a bye week and resume play this weekend when they host New Mexico (1-0) in their home opener.  The Lobos will be without their head coach Bob Davie, who was hospitalized with an undisclosed illness after his team defeated Sam Houston State 39-31 in the season opener on Aug. 31. New Mexico is a 37 1/2-point underdog.

Despite a sluggish start, the Nittany Lions eventually found their stride and pulled away from stubborn Buffalo in the second half of Saturday’s game en route to a 45-13 win over the visiting Bulls.  Penn State entertains longtime rival Pitt (1-1) this weekend at Beaver Stadium.  It will be the 100th meeting between the two teams.  The Panthers, who are coming off a 20-10 win over Ohio University, last defeated Penn State in 2016 with a dramatic 42-39 victory before a record crowd of 69,983 at Heinz Field — the largest crowd ever at a Pittsburgh sporting event.

Following a less-than-impressive 24-6 win against Tulane last weekend, Auburn dropped to ninth in this week’s poll.  The Tigers host Kent State (1-1) of the Mid-American Conference this weekend.

Similarly, Michigan drops three spots.  The Wolverines, who were lucky to defeat Army in double-overtime on Saturday, have a much-needed bye this week before returning to the gridiron on Sept. 21 with a huge road game against Wisconsin.

Taking out their frustrations following a season opening loss to Auburn — a setback that could ultimately cost the Ducks a College Football Playoff (CFP) appearance — Heisman hopeful Justin Herbert and his explosive offensive unit took no prisoners in shredding Nevada 77-6 last weekend.  Sorry Montana (2-0), but this is a team on a mission.  Don’t look for Oregon to let up anytime soon.

In the first of two games this season against teams from the Football Championship Subdivision (FCS) — they also host Towson on Sept. 28th — the Gators trounced UT-Martin 45-0 on Saturday.  UT-Martin won only two games last year.  Despite the loss of quarterback Terry Wilson, who tore a patellar tendon in his left knee in Saturday’s 38-17 win over Eastern Michigan and will be replaced by Troy graduate transfer Sawyer Smith, Florida is unlikely to have such an easy time against Kentucky (2-0) at Kroger Field in Lexington this weekend.  The Wildcats, who won ten games last season and defeated Penn State 27-24 in the Citrus Bowl, would love nothing more than to begin SEC play with an upset victory over the favored Gators.

The Spartans, whose Elijah Collins-led offense has suddenly come alive, crushed Western Michigan 51-17 this past weekend and shouldn’t have too much trouble with Arizona State (2-0) on Saturday.  While the Pac-12 visitors haven’t lost a game yet, they struggled against FCS Sacramento State in a 19-7 victory on Friday.

In their first road contest of the season, the unbeaten Cougars travel to Houston on Saturday.  Points have come early and often for WSU in a 58-7 season-opening drubbing of New Mexico State and a 59-17 win over Northern Colorado this past weekend.  They shouldn’t have any problem lighting up the scoreboard against this week’s opponent either, but Houston is capable of scoring quite a few points of its own.  This should be a high scoring affair.

The Badgers haven’t allowed a single point yet this season — and won’t give up any this weekend either since they have a bye week before hosting Michigan in their Big Ten opener on Sept. 21.

Coming off a tough loss to LSU, the Longhorns are heavily favored at Rice (0-2) on Saturday.

Impressive in 62-0 and 48-14 early season wins against Florida A&M and Lane Kiffin’s Florida Atlantic Owls, respectively, the Knights get their first major test of the season with a home game against Stanford (1-1) on Saturday night in Orlando.

The Aggies host Lamar (2-0), an FCS opponent, on Saturday before welcoming SEC rival Auburn to College Station on Sept. 21.

The Utes, fresh from a 35-17 win over Northern Illinois, should remain unbeaten when they host Idaho State (1-0) on Saturday afternoon.

In his second stint at UNC, 68-year-old head coach Mack Brown, who led Texas to a national championship in 2005, is already turning heads as the Tar Heels have started out stronger than anyone could have imagined with dramatic early season wins against South Carolina and Miami.  This week UNC plays its first road game when it takes on Wake Forest (2-0) Friday evening.  The Demon Deacons are also undefeated, having prevailed in a 38-35 thriller against Utah State in their opener and again last Friday in a 41-20 drubbing of Rice.

While Mike Locksley, a skilled recruiter, especially in the D.C.-Maryland-Virginia area, and former Alabama offensive coordinator might have already galvanized Maryland’s demoralized fan base with early season blowout wins — a 79-0 rout of Howard University and a stunning 63-20 upset of Syracuse last Saturday — it’ll be interesting to see if he can continue winning with any consistency.  As head coach of New Mexico, Locksley’s teams were a dismal 2-26 in two-plus seasons.  Playing Temple (1-0) in Philadelphia will be something of a challenge this weekend, not only because it’s Maryland’s first road game, but also because the Owls — a 56-12 victor over Bucknell in late August — have a pretty decent team themselves.

The Cavaliers, who looked good against Pittsburgh and William & Mary, host Florida State (1-1) on Saturday night.  The Seminoles are coming off a 45-44 overtime victory against UL-Monroe.

The Huskies dropped thirteen spots as a result of a stunning 20-19 loss to defensive-minded California at Husky Stadium in Seattle late Saturday night.  Washington looks to rebound this weekend when it hosts Hawaii (2-0).  The Rainbow Warriors head into the Saturday night contest with a pair of wins against Pac-12 teams.

The Trojans have been impressive in their first two games against Fresno State and Stanford, but could have their hands full with upset-minded BYU (1-1) in Provo this weekend.