UCF looks sharp as they take down visiting Stanford 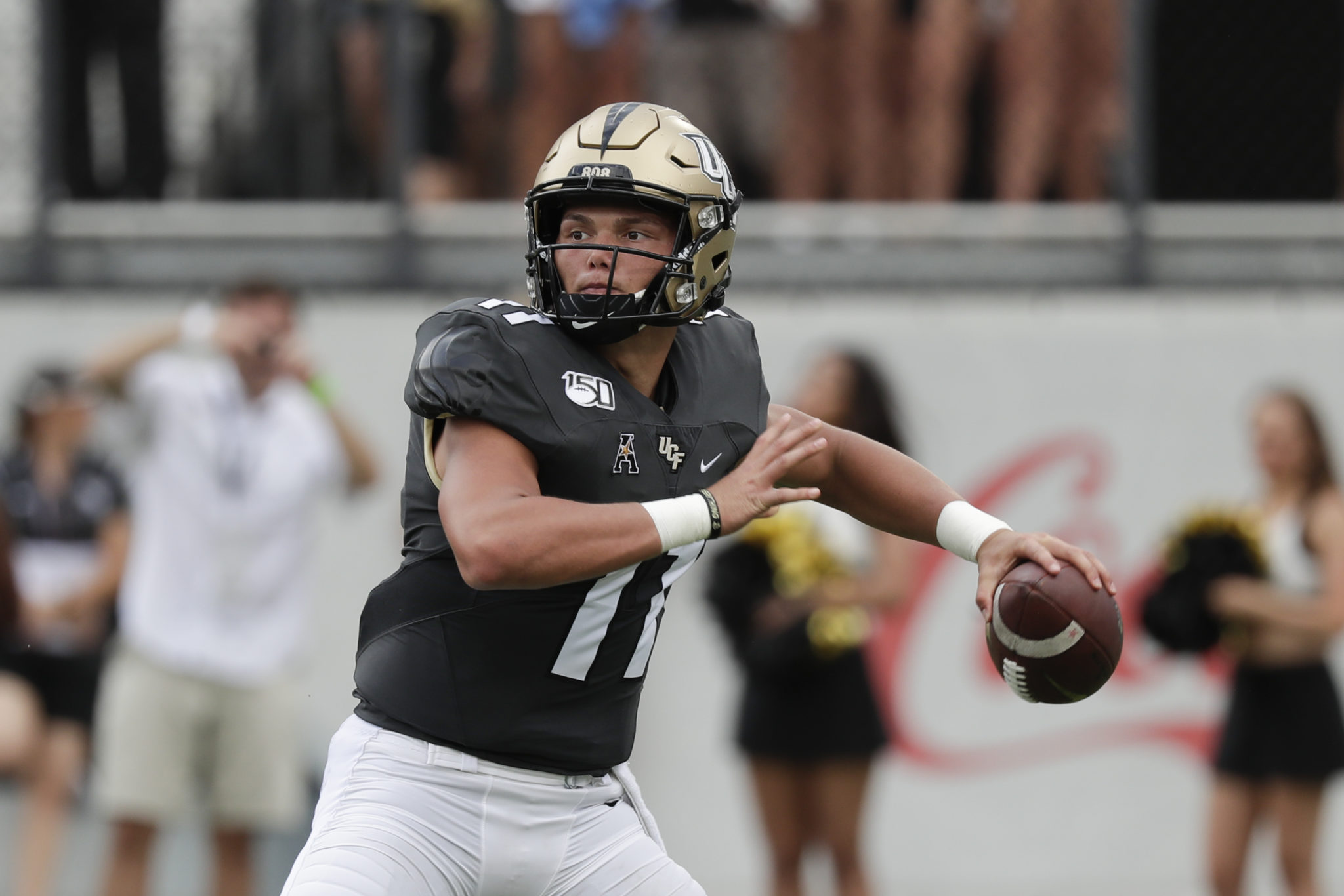 ORLANDO, Fla. — New quarterback, same results for No. UCF 17, which continues to state its case for inclusion in the discussion about elite teams in college football by lighting up the scoreboard and winning.

“I think since we’ve been here, we’ve been a part of the noise,” coach Josh Heupel said Saturday after the Knights dominated Stanford 45-27 for their 28th win in 29 games.

“I think people that watch us play, know that we play championship caliber football,” the second-year coach added. “We’ll hold our own every single week. They’re probably the most competitive group of kids that I’ve ever been around. They knew this was big.”

Freshman Dillon Gabriel threw for 347 yards and four touchdowns in his second college start, and UCF scored at least 30 points for the 29th consecutive game — the longest streak in the Football Bowl Subdivision since 1936.


The Knights (3-0) scored on six of seven possessions, building a 31-point halftime lead in what was expected to be a much tougher test for the two-time defending American Athletic Conference champions, who won their first two games of the season by a combined score of 110-14 against Florida A&M and Florida Atlantic.

“Pretty straightforward today, we got beat by a very good football team. Going into it all this Group of Five talk … I don’t know what any of that stuff is,” Stanford coach David Shaw said. “Doesn’t matter. What matters is they’ve got talent, they’ve got speed. They’ve got playmakers, and they’re a tough team … one of the best teams in America the last two years. They don’t need a statement win.”

Gabriel completed 22 of 30 passes, including TD throws of 28 yards to Marlon Williams, 38 yards to Tre Nixon, 38 yards to Gabriel Davis and 1-yard to Jake Hescook. Greg McCrae rushed for109 yards and one touchdown for UCF, which has won 25 consecutive regular-season games and 28 of 29 overall since the start of 2017.

Stanford (1-2), which tumbled out of the Top 25 after losing 45-20 at Southern California the previous week, yielded four touchdowns in the opening quarter and 413 yards total offense in the first half alone.


K.J. Costello returned to Stanford’s lineup after sitting out against USC with a head injury and completed 21 of44 passes for 199 yards, one touchdown and an interception that led to one UCF score. Austin Jones had a 35-yard TD run and finished with 65 rushing for the Cardinal, while Costello’s 24-yard TD pass to Michael Wilson’s 24-yard TD reception trimmed the Cardinal’s big halftime deficit to 38-17 early in the fourth quarter.

“I didn’t feel like I played well,” Costello said. “There’s certain situations that make the game hard, but there are certain situations where you have to make plays. I made a couple. But compared to what I expect from myself, I didn’t play well.”

Gabriel started for the second straight week for UCF, which entered the game with an unsettled quarterback situation, even though the Knights beat FAMU 62-0 and FAU 48-14 the previous two weeks.

Brandon Wimbush, a senior transfer from Notre Dame, started the opener before sitting out last week with an undisclosed injury. He was inserted into Saturday’s game for one play in the second quarter, losing 2 yards on a run on second-and-goal from the Stanford 2. Two plays later, the Knights settled for a field goal.

“They haven’t changed their offense in three years,” Shaw said. “They don’t care who plays quarterback. They run the ball and take (deep) shots.”

UCF’s quarterback situation was unsettled before Saturday only because Gabriel, Wimbush and Darriel Mack, Jr., who is practicing again after recovering from a broken ankle, have all demonstrated they are capable of thriving in the Knights’ high-powered offense. Mack took over last season when McKenzie Milton was injured and led the team in the AAC championship game and Fiesta Bowl, where UCF’s school-record 25-game winning streak was ended by LSU.

Critics of UCF’s success the past two years argue the two-time defending AAC champions play a relatively weak schedule, so beating Stanford is huge for the Knights. Pittsburgh is the only other Power Five conference opponent they’ll face during the regular season, so it’s important to make the most of those limited opportunities.

Tiger Woods, who lives in Orlando and attended Stanford, was among the crowd of 45,008. He spoke to the Cardinal before the game and even let Shaw slip on one of green jackets he received for winning the Masters.

“Tiger’s great. He tries to come to at least one game a year and it’s been awhile because he’s been playing a lot and it’s been tough for him to make it out to Stanford,” Shaw said. “So this was perfect for time, coming back to his hometown, perfect time to see him.”

Stanford played a regular season game in Florida for the first time. It was the fourth appearance in the Sunshine State all-time. The Cardinal played Clemson in the 1986 Gator Bowl, Penn State in the 1993 Blockbuster Bowl and Virginia Tech in the 2011 Orange Bowl.

Stanford: Returns home to face No. 15 Oregon next Saturday.

UCF: at Pittsburgh on Saturday.