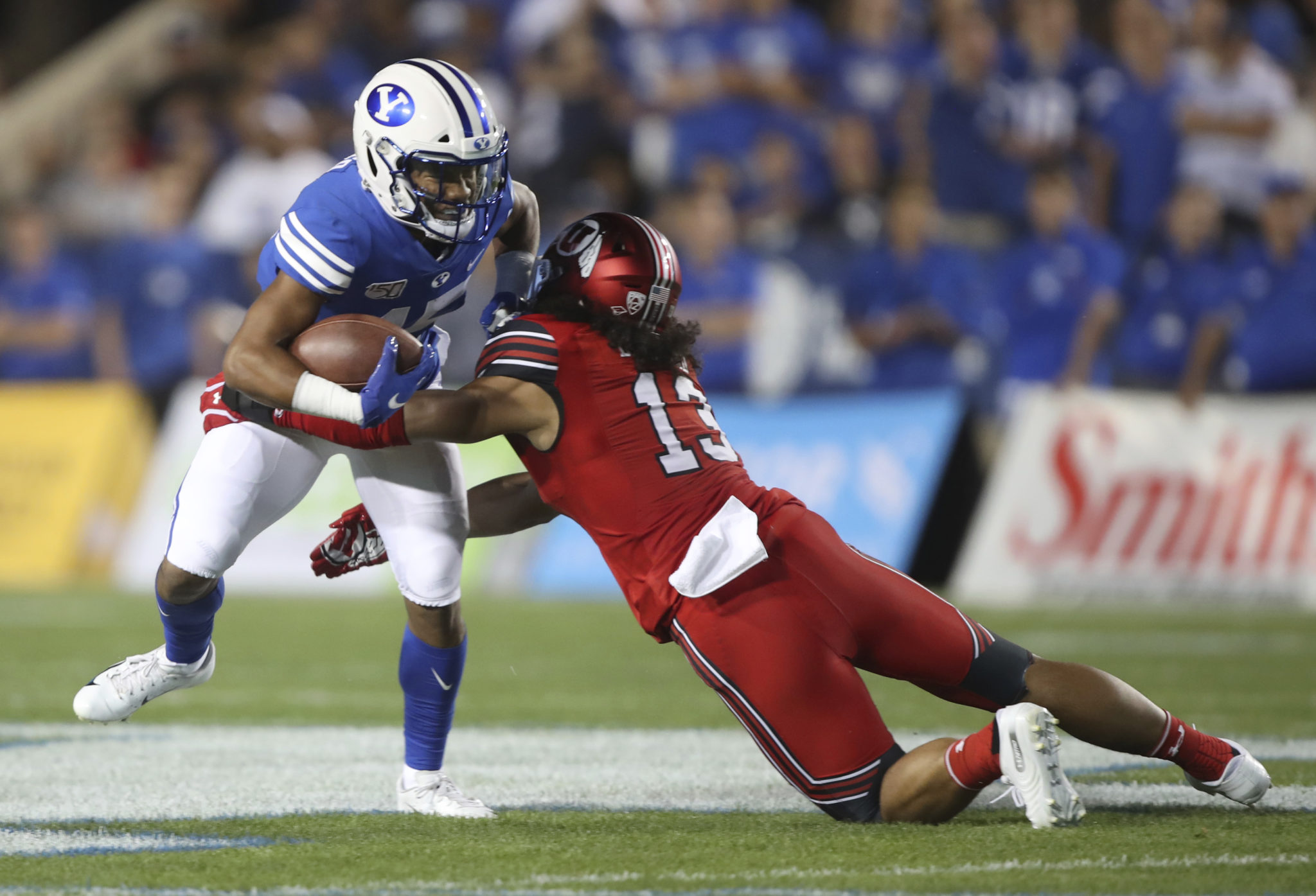 The No. 14 Utes come into their home opener against Northern Illinois on Saturday tied for first nationally in defensive touchdowns.

Their ability to force turnovers and convert those miscues into points played a key role in the Utes’ 30-12 dismantling of rival BYU to open the season. Utah scored off interception returns by Francis Bernard and Jaylon Johnson and totaled 20 points overall from three turnovers.

This isn’t a trend limited to a single game or opponent. Utah’s coaching staff drills a mantra of “four and a score” into players’ heads from spring to fall. The Utes make it their primary goal to create at least four turnovers and score a defensive touchdown in every game.


“It just drives us to be ball hawks,” Johnson said. “We always want the ball, whether it’s fumbles or interceptions. Anything we can do to get the ball, we just want to do it.”

Turnovers proved pivotal when Utah faced Northern Illinois a year ago. The Utes pulled away for a 17-6 win when Chase Hansen returned an interception for a touchdown with 2:36 left. Utah forced two turnovers and limited the Huskies to 228 yards. It helped the Utes overcome a pair of turnovers from their own offense.

“Northern Illinois is a team that gave us fits last year,” Utah coach Kyle Whittingham said. “We were lucky to escape there with a win.”

The Huskies appear capable of making it tough again in the rematch.

Northern Illinois won 24-10 over Illinois State in its opener after quarterback Ross Bowers put up some big numbers in his debut. Bowers, a graduate transfer from California, threw for 299 yards and a pair of second-half touchdowns. His passing helped the Huskies rebound from a listless first half on offense.


It also complemented a defensive effort that saw Northern Illinois hold the Redbirds to 238 total yards. The Huskies clinched a win on Jared McKie’s 32-yard interception return with 2:31 remaining.

“I just really liked the fight of our team,” first-year coach Thomas Hammock said. “Our players did not flinch. They stayed in the moment. They handled adversity. They handled the pressure.”

Here are other things to know when Northern Illinois visits Utah on Saturday:

Utah will use two kickers Saturday. Freshman Jadon Redding will get the call for field goals and PATs while UCLA transfer Andrew Strauch will handle kickoffs.

Whittingham made the switch to Redding after Strauch missed a PAT and a 25-yard field goal against BYU. Redding took over in the fourth quarter after Strauch’s field goal miss and kicked the PAT on each of Utah’s final two touchdowns.

A knee injury in spring ball forced Daniel Crawford to sit out the entire 2018 season. Now Crawford is back and showing signs he may become a top target for Bowers in 2019.

The redshirt senior caught three passes for 75 yards against Illinois State. Crawford had catches of 45 and 27 yards to set up field goal attempts for Northern Illinois. Coming into the season, he had totaled just 65 yards on seven catches for his career.

Northern Illinois experienced more success than any other team in containing Zack Moss last season, holding him to a season-low 66 yards and a touchdown on 16 carries.

Doing it again will be easier said than done.

Moss opened his senior season by churning out 187 yards and a touchdown against BYU. He averaged 6.5 yards per carry against the Cougars. Moss has rushed for at least 100 yards in his last four contests dating back to October and is coming off back-to-back 1,000 yard seasons.

“He is put together as well as any back we’ve ever had come through here,” Whittingham said.