Clemson staying focused on the field, not the rankings 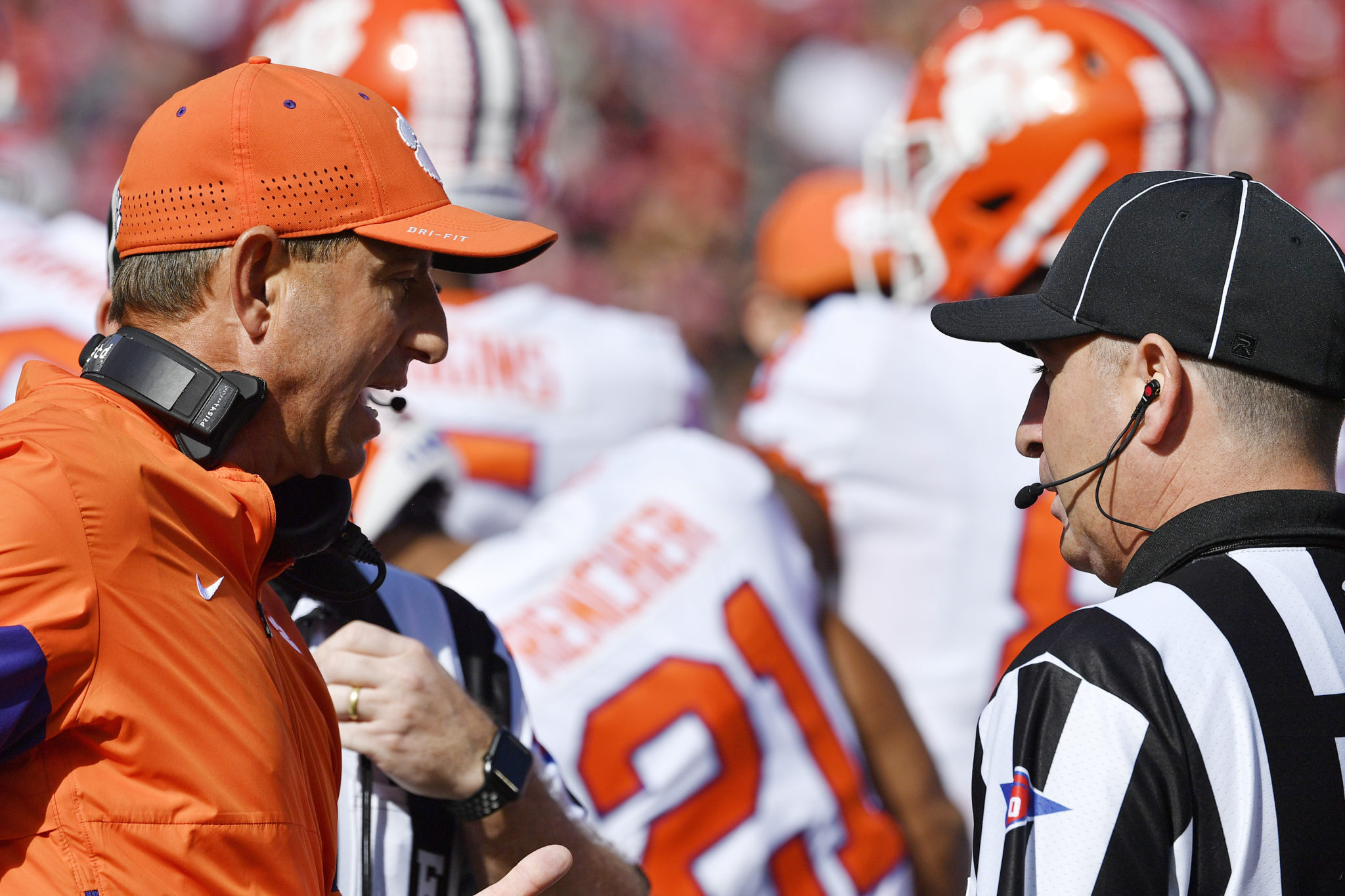 Clemson keeps winning but has dropped from first to fourth in the poll. Its coaches and players don’t seem bothered in the least.

The defending national champions are 7-0 and 5-0 Atlantic Coast Conference. They started the season at No. 1 and are riding a program-best 22-game winning streak.

But a too-close-for-comfort 21-20 win at North Carolina on Sept. 28 began a slide from the top that has them No. 4 this week behind Alabama, LSU and Ohio State.

Following the North Carolina escape, the Tigers roared back with wins over Florida State (45-14) and Louisville (45-10) the last two weeks. Still, that didn’t stop the slippage in the Top 25.


Co-offensive coordinator Jeff Scott says the joke around the team is that if Clemson continues to win at this rate “we’ll be out of the top 10 by December.”

Clemson coach Dabo Swinney has never been about rankings or records until the end — when he wants the Tigers in the final four for the College Football Playoffs. He was not particularly excited in August when the Tigers earned the preseason No. 1 spot for the first time.

He won’t lose much sleep as long as Clemson keeps improving.

“Everybody can have any opinions they want,” he said. “It doesn’t matter. What matters is us closing out October in a strong way. We want to win this division and win this league. What happens after that, hopefully, we’ll be positioned well.”

Clemson returns home this week for a game with Boston College (4-3, 2-2) on Saturday night.

The Tigers have made their share of mistakes — quarterback Trevor Lawrence threw two first-half interceptions before leading Clemson’s blowout — but except for the scare at North Carolina they have recovered in time to win handily.

Lawrence doesn’t worry about the rankings or analysts’ critiques of his delivery, technique and decision making.

“I think I do a good job keeping all the outside noise outside,” said Lawrence, who has thrown eight interceptions this year, double his total from all of 2018.

Swinney said the scrutiny can be wearying, and does not give the full picture.

“Trevor Lawrence throws two interceptions and that’s all you see on ESPN,” he said “You don’t see 20 of 29, nine straight completions. And all that.”

Clemson football under Swinney has routinely been a slow simmer , gradually learning from mid-season mistakes and playing its best at the end. The Tigers started 9-0 in 2016 before a mid-November loss to Pitt looked as if like it might harm their playoff chances. Instead, they won three straight to capture the ACC title and earn a two seed from the CFP committee.


Clemson then defeated Ohio State and Alabama for its first national crown in 35 years. The Tigers were two seeds in the playoff last year, too, on the way to their latest title.

“What we know is that we’ve been here before,” Scott said. “We trust our plan. We trust our preparation in that if we just stay focused and locked in and keep two hands on the wheel” success will follow.

It’s not easy for everyone to stay level-headed, though.

“She just figured out that LSU and Ohio State” moved past Clemson, Venables said. “So now I’m going to have to talk her off the cliff. She was literally so mad.”

Wallace, the senior safety, thinks the team will continue to get better, and he’s confident about the path to the playoffs.

“One thing they can’t do is when we go undefeated,” he said. “They can’t leave us out of the playoffs.”